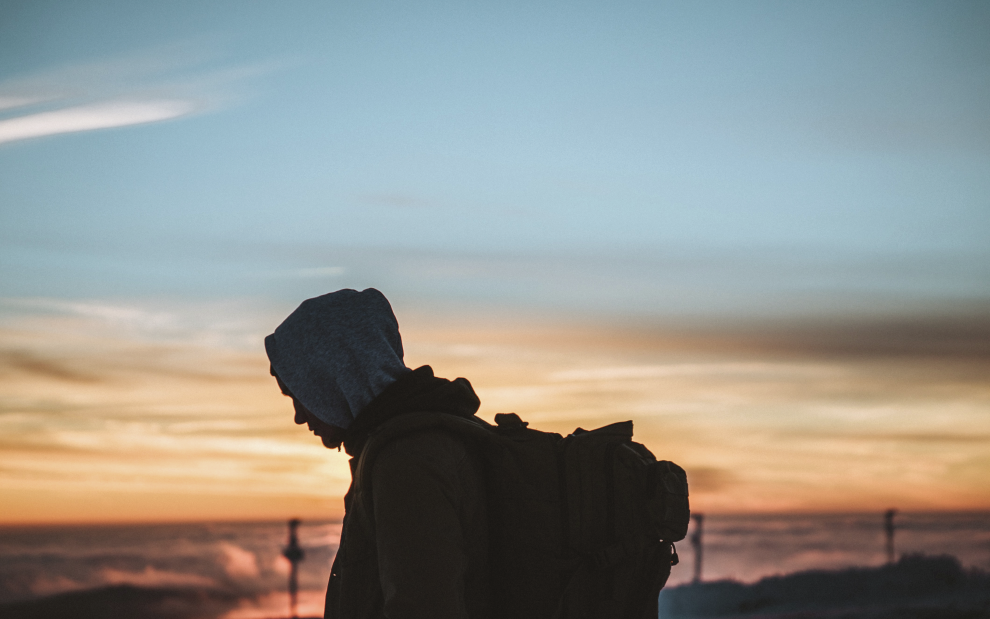 A lonely leftover phone booth stands on a street corner in Portland, Oregon. When a street person feels so inclined, he or she can use the one-time pay phone, now free of charge, to call friends and family anywhere in the world. Inside the phone booth, profound words and laughter are heard, and sometimes tears are shed.

My second son calls me infrequently. When he first became homeless almost 20 years ago, he would call more often, sometimes once a week, per my instructions. I needed to know he was OK. Then, over the years, he called less often. Until now it might be a couple of times a year. I always love hearing the sound of his voice, but then the meth-fueled ranting usually begins. The paranoid ramblings of a madman. Where is my sweet son? Where did he go?

“I found a new tent the other day, just put it up. I like it. It’s roomy. So I’m dry again.” His familiar chuckle is so near, like he’s next door.

I don’t want to define my son by a single thing he does.

My breath catches. My homeless, meth-addicted son sounds almost normal. I hold my breath, waiting. I hate reducing my son’s position in the world to that of a homeless meth addict, yet that’s what I often call him when speaking with others, maybe to ward off questions from other parents about how many kids I have and what they’re doing (“accomplishing”). I despise that kind of conversation as it too often starts with stories about their own kids—college graduates, Peace Corps volunteers, successful software engineers, blah, blah, blah.

I don’t want to do this anymore. I don’t want to define my son by a single thing he does (meth) or by where he sleeps at night (in a tent under a bridge). How do I stop doing this?

God, please help me. As a Catholic prison chaplain, I will deliver a reflection to the men in our Catholic Services group on the gospel reading this week, which happens to be Jesus’ Sermon on the Mount. The Beatitudes: “Blessed are the poor in spirit, for theirs is the kingdom of heaven. . . .”

“So how are you?” I turn off my computer and wait for the ranting to begin. Dwight is a man of few words, but when he’s high, he can’t—won’t—stop talking. I remember the days we could make a connection. Love each other without words.

“Well, I was really sick last week. I’ve never felt like that, ever. I couldn’t breathe, couldn’t even make it out of my sleeping bag, you know, couldn’t even stand up. I’m OK now though.”

I’m holding my breath again. COVID-19? What good would it do to even ask? Dwight never goes to a doctor.

“I’d love to see you.” His voice is calm, his tone even. “You ever get down to Portland anymore?”

We always talk about me coming down from Seattle to visit, but I can’t. I want to remember my tow-headed son the way he once was.

Then I find myself smiling. “Remember that time we ran into each other on the Morrison Bridge?”

Another chuckle. “Of course.”

My son has already inherited the Earth, and he wants for nothing else.

It was years ago now, the last time I saw my son. I was crossing the bridge, walking from the Amtrak station over to my other “successful” son’s secondhand store, the son I know how to find as he’s usually at his shop. No one ever knows where to find Dwight as he moves around. No one sees him unless he chooses to show up somewhere.

I was in the middle of the bridge when I heard, “Well, hello there, Mother.” Like seeing me on the bridge was an everyday occurrence.

“Dwight?!” I couldn’t believe it. No one else on the bridge. Me walking from one end. My son walking from the other. Connecting in the middle with a hug. I loved that moment. I revisit it often in my imagination.

“I want to show you my latest.” I followed him off the bridge to a legal wall where he’d left his graffiti trademark: SPOIL. I think I asked him what it meant one time, but he’d answered in some meth-fueled gibberish, and I’d never asked him again.

It’s beautiful, my son’s artwork. I’m proud of him, although I never share that with anyone; I don’t know how to explain Dwight’s life and what he loves to others.

He doesn’t love many “things.” I remember the time he called to tell me he wanted to come over and get into his two duffel bags, reduce them to just one. “I have too much stuff,” he told me. “It makes me nervous.” This was when he’d first gone homeless and still had “stuff.”

He showed up at my friend’s garage where he was storing his duffel bags. Shaking our heads, we watched him happily sort through the few things he had, delivering one duffel bag’s worth of junk to the dumpster, hauling the other back into the garage.

He emerged from the garage, wiping his hands on his pants. “Ah, that feels so much better.”

My son is without guile. A mother knows her child.

The Beatitudes’ “poor in spirit” aren’t those who don’t have stuff, but those who are humble. I know my son. The deal is, it’s Dwight’s humility that causes him to be happier without stuff than with stuff. While he doesn’t collect “things,” when he does come into possession of something, he immediately wants to share it with others. His is the kingdom of heaven.

Sometimes I worry about my son’s safety. I remember one time when he was running from the cops across a busy thoroughfare, and when they caught up to him, they beat him and dumped him off at the hospital, never to return. While it hurt my son’s feelings—and I knew he was traumatized by the event—he let it go. “Blessed are the meek, for they will inherit the Earth.” A meek person is one who is able to remain calm and subdued even when being provoked. Jesus had Dwight in mind when he spoke those words: “Blessed are the meek.” My son has already inherited the Earth, and he wants for nothing else.

“And how are you, Mom?” He’s thoughtful that way, always wants to know how I’m doing. Blessed are the merciful, for they will receive mercy. If he ever hurts anyone, it’s unintentional. My son is without guile. A mother knows her child.

We hang up, and I sit there feeling only gratitude for the phone booth. The other thing I feel grateful for is that the desire to change my son is no longer present within me. While I once thought he had to be miserable (aren’t all homeless, drug-addicted people miserable?), I learned long ago that I embraced this belief to feel that there was something I could do to help. If we want to feel like we’re doing something, we can always give a homeless person $5 because, you know, he’s miserable. And that makes us feel good.

How do I tell those who might want to know (although most don’t) that my son is so much more than the tent he lives in and the street he lives on? That meth is something he does, but that it’s not who he is?

Jesus once said, “Foxes have holes, and birds of the air have nests; but the Son of Man has nowhere to lay his head” (Luke 9:58). Yet, back to the Beatitudes, Jesus was the most blessed man who ever lived.

I can do this. Adjust my perception and reframe my son’s place on the planet. Relax and love him for exactly who he is at any given moment. Describe him to others in a way that emphasizes his gentle spirit, his humility, his generosity—rather than where he sleeps.

Whether he’s aware of it or not, Dwight does have a home, of sorts. In my heart.