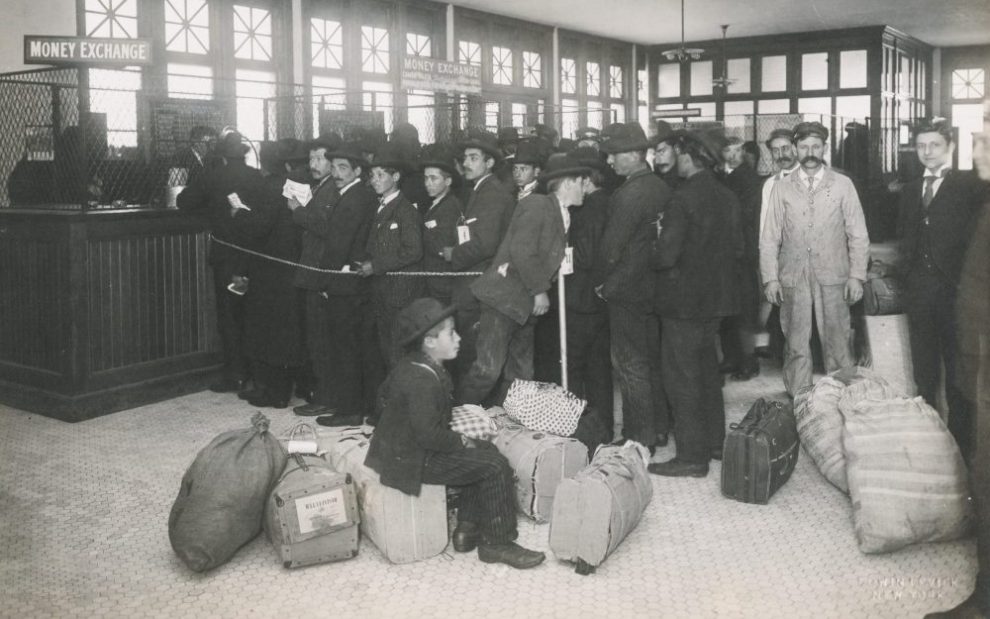 A devil’s bargain: This is when one exchanges one’s soul for worldly benefits. It’s more common than you think.

For many, a devil’s bargain comes from folk tales about people selling their individual souls for riches, a desired lover, a musical gift, or to feed an addiction. But that understanding is too narrow. More often, such bargains are made not as mere individuals but as groups. A group of people accepts a reasonable deal for their own survival and that of their children. No individual soul is lost to the devil, per se, but the collective soul of a group becomes mutilated by accepting a sinful social arrangement.

I have found this idea of a devil’s bargain useful when trying to understand the history of racism in the United States. This is because I think that the group racialized as white—or to use the great phrase from James Baldwin, “those who think they are white”—once made a devil’s bargain. This includes my own ancestors. Not all at once, of course.  It happened piecemeal over hundreds of years. And it continues to unfold as other migrant groups today also are invited to “think they are white.”

At the time of the migrations from Europe, this bargain made sense. In the Old World, upward mobility, human dignity, and a brighter future for children was almost unthinkable. There were rumors about a mythical land of equality and opportunity, milk and honey, where the various oppressions of Europe could be tossed off.  In this new land, this untamed wilderness, one could truly be free as God intended.  One could break free from the chains of European injustice once and for all. Furthermore, this land called “America” was an ocean away so one could not easily be dragged back by creditors, masters, landowners, clergy, or nobles.

So, over time, people migrated en masse. As they arrived, European migrants had to navigate a new nation whose foundations were steeped in genocide and slavery; that is, a nation whose power structure had created a racialized caste system.

Two of the largest groups of European Catholic migrants came from Ireland and Italy. The media of the 19tth and early 20th centuries caricatured both groups in ways similar to racist caricatures of African Americans: lazy, subhuman, innately criminal, and a threat to respectable society. The Irish arrived first and primarily to cities in the North in the 19th century. In places like New York, Boston, Philadelphia, and Chicago, they met discrimination (“No Irish Need Apply”), violence in the streets (police brutality and gang violence), and were often relegated to the slums and lived among and sometimes had children with freed Black people who were equally as impoverished (like in the infamous 5 Points neighborhood in New York).  As the late historian, Noel Ignatiev, observed, “In the early years [of the migrations], the Irish were frequently referred to as ‘[Negroes] turned inside out’; the Negroes, for their part, were sometimes called ‘smoked Irish,’ an appellation they must have found no more flattering than it was intended to be.”

As they arrived, European migrants had to navigate a new nation whose foundations were steeped in genocide and slavery; that is, a nation whose power structure had created a racialized caste system.

Despite discrimination, violence, and oppression, the Irish gained a foothold through building railroads and canals, fighting in the Civil War, entering law enforcement, and becoming staunch supporters of the Democratic Party. At the time of the Irish migrations, the Democratic Party was pro-slavery and anti-abolitionist and pragmatically decided to welcome the Catholic Irish to increase its political power in the North. The Irish were arriving in droves and no one else wanted them. The abolitionist Republicans harbored too much anti-Catholicism and did not understand the needs of the Irish migrants. The Democratic Party could consolidate power in the North and the Irish could receive political support and patronage.  Over time, the Irish garnered political power, economic stability, and ecclesiastical dominance and distanced themselves from African Americans culturally, politically, and spatially. They forced the WASPy nation to accept them as honorary WASPs .

Italians, and especially darker-skinned Sicilians, migrated to both the North and the South during Reconstruction and in the early 20th century. In the South, they often took jobs on former plantations that were in need of labor after slavery was abolished. This led to Italians working the sugar cane fields in Louisiana, socializing and having children with African Americans, and threatening the emerging Jim Crow power structure of the South. Tensions ran so high that in 1892 one of the largest mass-lynchings in U.S. history occurred in New Orleans when a white mob murdered eleven Italian men who had been acquitted of the charges of murdering a police chief. Like the lynchings of African Americans, this lynching was publicized and celebrated by the local newspapers.

The consequences from this atrocity included the Italian government breaking off diplomatic ties with the United States until reparations were paid, which motivated President Benjamin Harrison to proclaim a one-time celebration of Columbus Day to pacify furious Italian American voters. Over time, Italians gained economic stability, political clout (first through the Republican Party and later the Democratic), and one symbolic victory in Fiorello LaGuardia becoming the first Italian American mayor of New York in 1933. This showed that Italian Americans, like the Irish and Germans before them, had also claimed their place in American society and were accepted as “white.”

Many of the once-oppressed immigrants and their descendants became passive or willing oppressors of their fellow Americans whose only “crime” was a greater amount of melanin in their skin.

To survive, these and other European migrants had to find a place of power and acceptance. They realized that to thrive in this land of opportunity required a sacrifice: Their old ethnic and cultural identity had to be extracted—slowly but surely. Oftentimes this meant the self-amputation of old identities and languages as if they were gangrenous limbs. A family or community was no longer Irish or Italian.  Over time, each learned to graft a new public identity—“white American”—upon the festering stump where the previous identity had been. This identity was conveniently offered by the power structure to ensure that no overwhelming multi-racial coalition of poor people would arise to demand a different economy and society. A group could retain some of their defining cultural characteristics in private and in worship. But, in public they had to acquiesce and assimilate to the language, rituals, and values of White Anglo-Saxon Protestantism and the racist anti-Blackness upon which it thrived.

This is what James Baldwin called “the price of the ticket” or what we might now call the cost of a “seat at the table.” This was the devil’s bargain. At the time, few immigrants probably realized how damning this bargain would become. Many of the once-oppressed immigrants and their descendants became passive or willing oppressors of their fellow Americans whose only “crime” was a greater amount of melanin in their skin. The pain from the European immigrants’ own wounds—and their descendants’ intergenerational trauma—could be harnessed to harm others and ensure that their status in the dominant caste was not threatened. When the survival of oneself and one’s children is at stake, a devil’s bargain seems reasonable—even necessary.

By the time the Civil Rights Movement came to the North—cities whose white populations and politics tended to be dominated by Catholics: Irish, Italian, and otherwise—the violent backlash was intense. During Dr. King’s Chicago campaign in 1966, the Movement was attacked by white mobs in the neighborhood of Marquette Park, was thwarted at every turn by its Catholic mayor Richard J. Daley and his ecclesiastical sycophants, and found little success. Dr. King left dejected, claiming that he had experienced violent racism in Chicago the likes of which he never had encountered in his Southern campaigns.

A decade later, the white protests against using busing to desegregate schools in the North showed additional anti-Black sentiment among white ethnics. The Equal Justice Initiative points out, “Northern opposition to desegregation led to declining public school enrollment, increased support for private schools, and launched an exodus of white families from cities to suburbs.” As musician George Clinton famously pointed out, this led to “chocolate cities” and “vanilla suburbs” and a re-segregated America.  And, as recently as 1997, three young men in the white Catholic stronghold of Bridgeport in Chicago attacked an African American boy and beat him so badly he was in a coma.

In 2021, however, we their descendants have the freedom to make a different choice.

For many white Catholics, I assume that this history is a difficult pill to swallow. After all, so many of our families carry memories of being targets of hate and violence from the Ku Klux Klan, White Anglo-Saxon Protestants, and even other Catholics. In my own family, there is a story from generations ago of Irish family members needing to carry guns during their Catholic funeral procession through the streets of Akron, Ohio because of the threat of the KKK.

Nevertheless, denial here is not our friend. Many of our American Catholic ancestors made such a bargain. Rarely did they heed the wisdom of the great prophet from Nazareth whom we profess as Lord and Savior: “What good is it to gain the world but lose your soul?” We have no right to judge them because their survival was at stake. And we may not be here if they had not made such decisions. That is why judgment belongs to God and God alone.

In 2021, however, we their descendants have the freedom to make a different choice. We can choose to become disciples who are actively anti-racist. We can choose a life-giving, mystical-political spirituality that seeks God’s reign of justice and compassion in this world. Above all, we can seek to imitate the self-giving love and egalitarian flow of the triune God of life.

And better late than never. Yes, we believe in a God of salvation. And God will have the final word. But in the meantime, remember the folk stories. There is a cost, and the devil always returns to collect his debt.