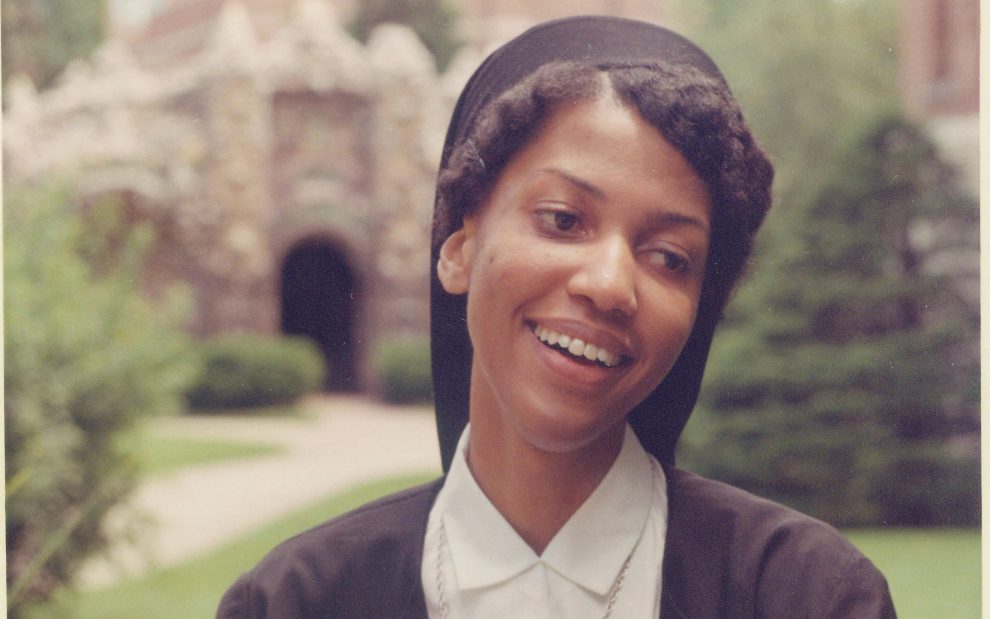 Last fall in the month of All Saints, I rode the Amtrak from Providence, Rhode Island to Baltimore, Maryland. I was heading to a celebration of the life of Mother Mary Lange. Who’s that, you ask? She’s one of the Six. And if you have to ask, “Who are the other five?” then you have to hear the story.

It started when I was asked to cowrite a book about U.S. saints. The publisher wanted to include all the American saints, plus the beatified (those one miracle short of sainthood).

It’s not as clear-cut as it sounds. The trouble is defining what’s meant by an “American” saint. We were to cover U.S. saints only, not Canadian, not Central or South American. But should that list include those who ministered on the soil of this country before 1776? And does “U.S. soil” include Guam and Puerto Rico before, or even after, they became part of our national story?

Kateri Tekakwitha was the lone person of color left in the book after the ejection of Blessed Charlie. This bothered us mightily at the time: the whitewashing of U.S. models of holiness. It wasn’t that the canonization pipeline hadn’t identified worthy candidates of color to nominate. A considerable number of Black, Cuban, and Puerto Rican Catholics languish on the backlogs of sanctity awaiting recognition.

As we traveled the country visiting places where the saints and beatified had worked, we found informal shrines to others whose stories were as compelling as the ones we were commissioned to tell. We resolved to also promote their stories until their names were as well known as the folks with their own holy cards.

Mother Mary Lange is on our wish list for formal sainthood. Right now she bears the title Servant of God (step one of formal recognition of her cause in Rome). Her birth date at the end of the 18th century in Cuba is uncertain. But she lived into her 90s and died in 1882. Hers was a difficult era of history for a dark-skinned woman. That’s saying something, since no era has been especially easy for someone like her.

Elizabeth Lange emigrated to the United States in the early 19th century, settling in Baltimore as a free woman of color in a slave state. Public education wasn’t open to Black children, so Lange opened a free school in her home entirely self-financed. Sulpician Father James Hector Nicholas Joubert noticed her efforts and encouraged her to found an order of sisters to carry out this ministry.

The Oblate Sisters of Providence became the first Black religious community in the nation. Lange took the name Sister Mary. She and three other women continued to educate girls of color with financial and institutional support from Father Joubert. The sisters also offered night classes to adults, nursed the sick during a cholera epidemic, and opened a home for children orphaned by the Civil War.

Father Joubert died in 1843. Without him, ecclesial support evaporated. The sisters became destitute, and their ministries suffered. White priests (there were no Black ones) refused to provide sacraments or spiritual counsel to Mother Lange’s community. The sisters were spat on and pushed into the street by passersby. Many left the order. Yet Mother Lange persisted until she became blind and enfeebled in her final years. Her community survives today.

A considerable number of Black, Cuban, and Puerto Rican Catholics languish on the backlogs of sanctity awaiting recognition.

Meeting today’s Oblates in Baltimore and hearing them tell the history personally was deeply thrilling. I expressed interest in sharing Mother Lange’s life more broadly, and each time I mentioned this, whichever sister I was addressing immediately insisted: Tell the stories of all Six. Promote the Six. We need the Six.

These generous women were not merely trying to get their immensely impressive foundress canonized. They were just as vocal concerning Venerable Pierre Toussaint (1766–1853), whom I’ve privately dubbed the Holy Hairdresser.

Toussaint was an enslaved Haitian with a gift for coiffure. Transplanted with a white family to New York City, this gracious man refused to see color when it came to assisting those in want. He made lucrative earnings doing hair for high society. He used his income to support Black schools and whites-only orphanages as well as impoverished priests and countless other individuals in need. When the white widow whose household he served fell on hard times, Toussaint supported her financially. This remains astonishing. Only then did she offer Toussaint his liberty.

Also among the Six is Venerable Henriette Delille (1813–1862), Creole foundress of the Sisters of the Holy Family. These New Orleans sisters offered an education to free mixed-race children by day and enslaved people by night—ever walking the precarious color line. Of its bitter restrictions, these Creole sisters were themselves well versed. They also provided shelter for destitute Blacks, cared for the sick, and served the poor of New Orleans. Despite their good works, due to prejudice these sisters were forbidden to wear a religious habit in public until a decade after Mother Henriette’s death.

U.S. Catholics should know Lange, Toussaint, and Delille. We should also know Servant of God laywoman Julia Greeley (born between 1833 and 1848, died in 1918), an illiterate enslaved woman who became a one-woman St. Vincent de Paul to the poor of Denver. She begged from the rich families and gave to the poor ones. Conscious of their shame in accepting aid from a Black woman, she brought help to white families only after dark.

More of us know Venerable Augustus Tolton (1854–1897), the first Black priest recognized as Black ordained in the United States. (Earlier, the Healy brothers had passed for white.) After every seminary in the country refused to admit Tolton, he went to Rome to prepare for ordination. He faced fierce bigotry, lack of ecclesial support, and financial distress. His priesthood ended too soon, a result of the poor health care options available to Black Americans.

Servant of God Thea Bowman (1937–1990) rounds out the Six. Converting to Catholicism and joining the Franciscan Sisters of Perpetual Adoration was no easy matter for Bertha Bowman. She faced racism within the community, yet overcame it with a radiance and confidence that sprang from a rich Black heritage, the civil rights awakening, and the Second Vatican Council. Sister Thea became a worldwide evangelizer, writer, and gospel singer, challenging church leadership to consider its complicity in racism. Through her final debilitating years living with cancer, she proclaimed the gospel while bald and in a wheelchair, never diminishing her message of what it means to be Black and Catholic.

Do we really need more saints? Actually, we need millions more! But let’s start with these. Let’s fight for the Six.