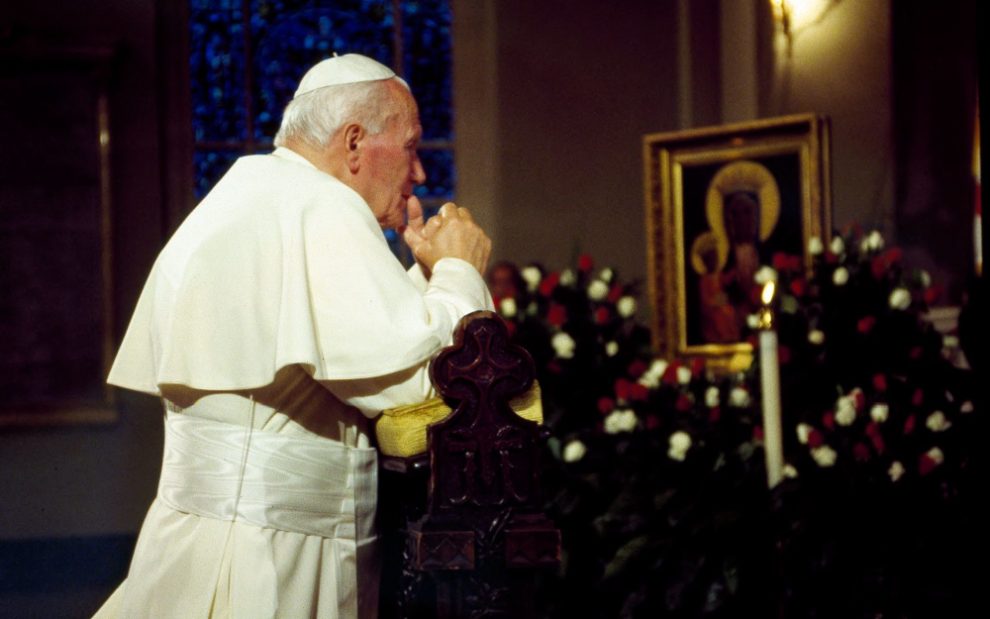 Growing up, Pope St. John Paul II was one of my dziadzius, or grandfathers. His spirit infused the house of my Polish grandparents, the sprawling, piecemeal concoction built on the site of an old landfill.

Along with Our Lady of Czestohowa and the White Eagle, his face looked down over us. But more powerful was his presence, the grandfatherly compassion that filled this mysterious corner of the Old World.

Every month we pulled into the driveway and parked across from the Marian shrine Dziadiu built to fulfill a vow he made to her during the war. The house was unfinished as Dziadziu worked on it only when he had the extra money.

There were doors of different sizes, some too short for me now. It had an unconventional layout with unexpected corridors and stairs to places I would never go until after they died. The center: an old out of tune piano in the front room that all the cousins pounded on when not running in the yard before Mary.

While John Paul worked at a chemical factory and studied in an underground seminary during World War II, my grandparents worked in camps in Germany. According to some recently contacted relatives, Dziadiu passed through Auschwitz, where his brother was killed. Babcia was abducted from her small hometown outside Krakow while walking home, thrown into a truck, and hauled away to Germany.

After the war, John Paul was ordained and went to Rome for further studies. My other grandparents remained in Germany in a resettlement camp where their first three children were born. They had finally obtained papers to go to Australia when at Mass they heard of an opportunity to go to America. In late 1950 they boarded a ship and celebrated Christmas in the North Atlantic.

More than anyone else, with Pope St. John Paul II I could “feel” the distinction the church makes about saints—they are not perfect, only display heroic witness—because I felt it in my grandparents.

Dziadziu and Babcia started a new life in small-town New England, but they hadn’t escaped. Trauma hung over their home like a cloud, like the dreary days of Lent that I remember most.

Like our Lady of Czestohowa, Bapcia was forever scarred, Nazi ghosts stalking her nightmares until the Lord called her home.

I didn’t begin to understand until I was the fourth grade. I interviewed Dziadziu for a project on World War II, and its ghostly memory is as strong as anything I experienced in childhood: Dziadziu pulling up his sleeve under the window by the kitchen sink and showing me the numbers tattooed on his arm.

Still, rays of light shone into the house, radiating from the Divine Mercy image of Jesus. And my other Dziadziu’s portrait was on the wall: John Paul was a visage of hope and there was something tribal about having him in the Holy See.

Even back then I sensed the strange power that Dziadziu must have had to emerge from behind the Iron Curtain and not only become the heir to the throne of St. Peter but the real leader of the free world. How the same grandfatherly compassion looking down on us and helping to shield us from the worst of the trauma was staring down an evil empire and cutting through its rotting facade.

More than anyone else, with Pope St. John Paul II I could “feel” the distinction the church makes about saints—they are not perfect, only display heroic witness—because I felt it in my grandparents.

I saw the Polish temper in my Dziadius, the temper that flared up the worst when dealing with a world they didn’t fully understand. It would erupt when we cousins chattered in English and pounded on the piano, Dziadziu unleashing a torrent of broken phrases that after their initial shock left us laughing. I feel that when I see Pope St. John Paul standing over Father Ernesto Cardenal, scolding him like we were scolded at the piano. My Dziadzius weren’t incorrect, but maybe in those moments not exactly right either.

My grandparents’ heroism was obvious: birthing new life in the wreckage of their abductors and cultivating it in a new land among demons they were powerless to escape.

Were there some things that John Paul’s location did not let him experience and I wish he could see with greater complexity? Sure, but like with my grandparents their limitations and flaws pale in comparison to their gifts.

My grandparents’ heroism was obvious: birthing new life in the wreckage of their abductors and cultivating it in a new land among demons they were powerless to escape. And my other Dziadziu cultivated a just and harmonious social order out of the shattered remnants of Europe even with his blood.

Key to John Paul’s gift was his theology of freedom, what he called to us then and even more so now. Freedom is not “empty,” the sanction to do whatever we want. Rather, it is the freedom to do the good out of love for goodness itself.

When thought about in our American context, freedom and the good are easily reduced to a cognitive level, to a list of truths. What is sometimes missed is freedom’s most fundamental characteristic: what John Paul calls in Evangelium Vitae (On the Inviolability of Human Life) its “inherently relational dimension.” Essential to goodness are others and freedom is not freedom without choosing community and fellowship.

Yet we can’t help reading even this definition of freedom in light of our Lockean individualism, that we start as free individuals and then choose to associate with others. For John Paul, it is only because we are already embodied within relationships that God gives us freedom. “Yes, every man is his ‘brother’s keeper,’ because God entrusts us to one another. And it is also in view of this entrusting that God gives everyone freedom.” This “great gift of the Creator” is only fulfilled “through the gift of self and openness to others,” he writes in Evangelium Vitae.

Freedom is not, in other words, the right to spiral off into isolated atoms guarding our islands or to self-select into factions that wage war on all those not sufficiently like us. Freedom is to actively cultivate what we already are: a large and growing spiritual family that actively chooses one another to activate the connections that God has already given us.

When thought about in our American context, freedom and the good are easily reduced to a cognitive level, to a list of truths.

There is a kind of magnetism required to make this work, built of virtue, sacrifice, gift, and love—not the freedom to take but in emptying oneself as Christ did in taking our humanity.

I saw that from the little corner of the Old World that my Dziadziu and Bapcia built. I saw John Paul return to Poland, calling down the Holy Spirit and sending out shock waves of authentic freedom that would culminate in the fall of the Iron Curtain.

I also saw John Paul enact authentic freedom across the globe. I saw the future saint lamenting at the door of no return in Senegal and kissing the basket of South African earth that he had refused to when it was still under Apartheid. I saw him with bowed head as purifying smoke and Native prayers washed over him in North America and declaring that “Christ, in the members of his Body, is himself Indian.” I saw the smiles of deep friendship that he shared with the Dalai Lama. All declared without qualification You are my keeper and I choose you. In freedom let us together build a culture of life.

My grandparents did this in miniature alongside John Paul II. They enacted authentic freedom: everyday waking up and choosing those entrusted to you, battling the demons, and giving of yourself until there is nothing left to give.

That’s the freedom and unfolding sanctity that I witnessed: the bodies of my Dziadius and the mind of my Bapcia crumpling before our eyes, returning to the Earth after being consumed by their love for us.

I love you Bapcia and Dziadzius. Intercede that I may love until I crumple into God and join you in the Heavenly Jerusalem. I know you are waiting.