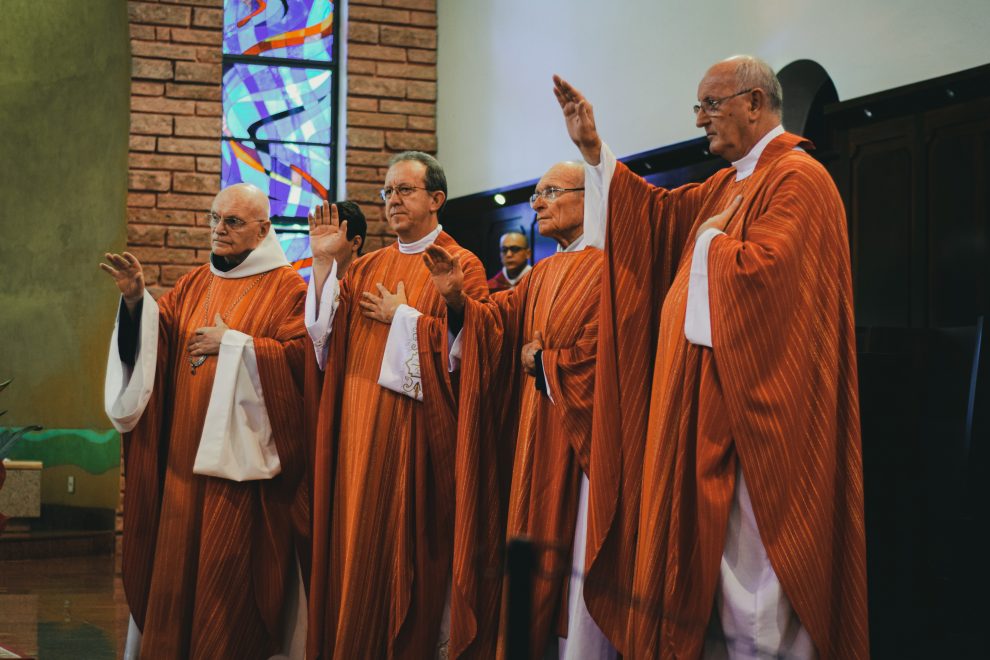 Making the sign of the cross is a gesture that says, in shorthand, that a person is Catholic. It appears as an icon in popular culture, and as a gesture it is scattered throughout film history. Moving priests make solemn signs over newly dead persons or penitents in the confessional, boxers make clumsy signs with their gloved fists, tonsured monks in medieval garb make the same gesture as a shorthand way of indicating that they are either superstitious or in the presence of some eerie portent, and there is nothing like a vivid sign of the cross (made preferably with a raised crucifix) to get Bela Lugosi as Dracula to turn away dramatically from a previously inviting neck.

Where did the custom of signing with the cross originate, and what does it signify?

It is a curious fact that the cross does not appear in Christian art until the fourth century, but the tracing of the cross on the forehead with thumb or index finger is found in popular Christian usage as early as the second century.

The more expansive sign of the cross (touching forehead, chest, and shoulders) is first mentioned in the devotional life of Christians in the fifth century, but it was not until the early Middle Ages, largely through the influence of monasteries, that the gesture comes into general use. By this time there was also a widespread custom of blessing in the form of a cross using the eucharist, the gospel book, or a reliquary.

Today, of course, the gesture of the large sign of the cross with the invocation, “In the name of the Father . . .” is common and universal in the Catholic Church.

But we are so accustomed to making the sign of the cross that we may have never stopped to ask what the gesture means.

First, every religious tradition incorporates bodily gestures to “thicken” the power of religious language. In that sense, the sign of the cross is a form of body language like the gestures of raising the hands in prayer, kneeling, bowing, and so on.

Second, powerful symbolic gestures, when examined up close, say more than one thing. Quite obviously, signing ourselves is a mark of our belief in the saving actions of Jesus Christ. We also make the sign in the name of the Holy Trinity by invoking Father, Son, and Holy Spirit.

A final point: Making the sign of the cross, in whatever form (think of the lovely custom of a parent tracing the cross on the forehead of an infant who readies for bed or an older child who goes off on a journey), is so common as to be a routine.

One practical strategy for our common Christian spiritual life is to relearn what we are doing when we sign ourselves. In his evocative book Sacred Signs the late Romano Guardini made the point so beautifully that I will give him the last word:

It is the holiest of all signs. Make a large cross, taking time, thinking what you do. Let it take in your whole being—body, soul, mind, will, thought, feelings, your doing and not-doing—and, by signing it with the cross, strengthen and consecrate the whole in the strength of Christ, in the name of the triune God.