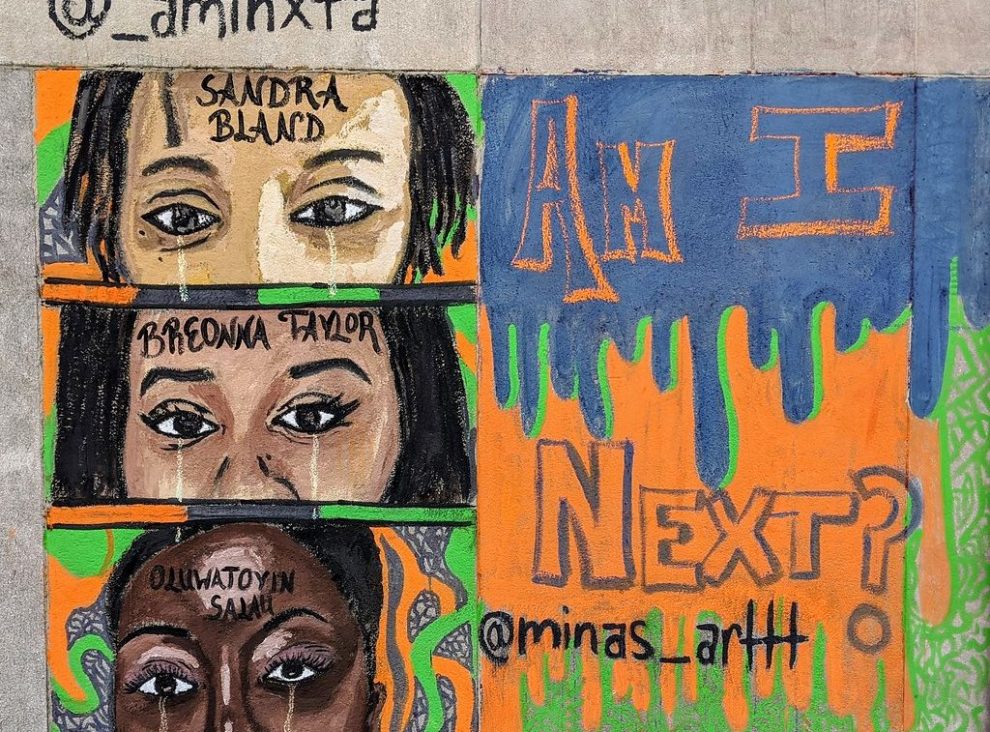 Two months before police murdered George Floyd in Minneapolis, Breonna Taylor, a 26-year-old Black woman, was shot and killed in her own home by police officers. Three months after Freddie Gray died in police custody, Sandra Bland was found hanged in her jail cell. And 10 days before Tamir Rice was shot for carrying a toy gun, Tanisha Anderson died in police custody during a mental health episode.

George Floyd, Tamir Rice, Eric Garner, Philando Castile. Many of us are familiar with these names: all Black men and boys who have been killed by police in the past several years whose deaths have become flashpoints for Black Lives Matter and other racial justice movements. But what about names like Natasha McKenna, Michelle Cusseaux, Malissa Williams, or Aiyana Stanley-Jones?

In 2014 the African American Policy Forum and Center for Intersectionality and Social Policy Studies launched the #SayHerName campaign to remember the names and stories of Black women killed or hurt by police. The campaign argues that while there is a framework for understanding the killings of Black men and boys, Black women and girls remain silenced, their stories of police violence remain untold. The #SayHerName website homepage explains the importance of naming each woman by saying, “Knowing their names is a necessary but not a sufficient condition for lifting up their stories. . . . We need to know who they are, how they lived, and why they suffered at the hands of police.”

Take, for example, Atatiana Jefferson, a 28-year-old pharmaceutical salesperson. One early morning in October 2019, Atatiana and her 8-year-old nephew were playing a video game at their home in Texas when she heard a noise outside. When she went to the window to look out and see what was happening, she was shot and killed by a police officer in her yard.

The police had arrived in response to a phone call from a neighbor: He had noticed that their front door was open and, since it was late at night, had called the non-emergency police line to ask someone to stop by to make sure everything was OK. But when they arrived, police treated the situation like there was a crime in progress: They concealed their presence and came on to the property with weapons drawn. When Aaron Dean, one of the officers, saw a shadow in the window, he fired a shot through the open window, killing Atatiana.

Why wasn’t Atatiana’s death a cause of national outrage? Where were the protests, the street art, and the signs? Why wasn’t her name cried out from pulpits or her death addressed by bishops and parishes? Why have we as a nation forgotten her name?

Most Catholics are not strangers to scriptural violence. Cain and Abel, David and Goliath, the beheading of John the Baptist, and the crucifixion of Christ are all gruesome, graphic stories.

Reading the stories of so many murdered Black women and girls whose deaths have gone almost unremarked upon, I am reminded of a story that appears at the end of the Book of Judges. This is a story that you won’t hear read from the lectern on Sunday morning or preached on from the pulpit. You probably won’t read the passage in a Bible study or see verses passed around on social media. Like the story of Atatiana, it is a story about a woman who suffers horrific violence at the hands of those who should have protected her, and it is a story that is often forgotten or remains untold.

The tale involves two characters: a Levite and his concubine (or secondary wife, as the notes to my Bible kindly point out). At the beginning of the story, after an argument with her husband the woman leaves him and goes to her father’s house, where she stays for four months. Eventually, her husband forgives her for whatever transgression she may have committed and sets off after her, planning “to speak tenderly to her and bring her back” (19:3). But when he arrives, his father-in-law is overjoyed to see him, and the man gets distracted by his over-the-top hospitality, remaining several days later than he originally planned.

Eventually, the couple sets off. But while they hope to make the journey in one day, at nightfall they find themselves only partway home in a town called Gibeah, which is inhabited by Benjaminites, another Israelite tribe. At first it seems as if they have arrived too late, and no one seems inclined to give them shelter for the night. But eventually a farmer returning from the fields takes pity on them and offers them hospitality.

Here the story takes a turn toward the horrific. While the couple and their host were enjoying themselves, “the men of the city, a perverse lot, surrounded the house, and started pounding on the door,” demanding that the host give up the Levite so that they can kidnap and rape him (Judges 19:22). Although the host stands up for the Levite, his proposed solution leaves something to be desired: He offers up his daughter and the concubine to the crowd instead.

Sometimes it seems as if nothing has changed since the days of ancient Israel.

Scripture goes into graphic detail about this woman’s fate, but it suffices to say that the story does not end well. The concubine dies from her wounds, making it as far as the doorway of the house where her husband is staying before she expires.

Most Catholics are not strangers to scriptural violence. Cain and Abel, David and Goliath, the beheading of John the Baptist, and even the crucifixion of Christ are all gruesome, graphic stories. Stories of the early Christian martyrs were no different, with beheadings, burnings, and deaths by lion. But there is something about this story that is even more disturbing, that makes it both hard to talk about and hard to look away.

Perhaps it is the fact that this woman remains silent and voiceless throughout the entire story. She is given agency at exactly two points in the story: when she goes to her father’s house and when she crawls back to her husband to die. Both times she is seeking comfort and safety from someone who, ultimately, is unable or unwilling to provide. She doesn’t even have a name. We know absolutely nothing about her besides the fact that she is a secondary wife to an unkind man.

But another reason I find this story so difficult is that sometimes it seems like nothing has changed since the days of ancient Israel. Women, particularly women of color, are still silently suffering assault and violence by those who they expect to protect them. They are being murdered for no cause. And their names are being lost to history.

It may be too late to protect the woman in Judges or Atatiana Jefferson, but our society still has time to protect future generations.

The same things that make it hard to wrestle with the story of the unnamed concubine make it hard to come to terms with the death of Atatiana Jefferson. Like the woman in scripture, Atatiana thought she was safe in her home when she was killed. Like her, Atatiana was let down by the people who should have been protecting her. And like her, Atatiana was a young woman who had done nothing wrong, who should have had her whole future ahead of her.

Sheneque Proctor, Aiyana Stanley-Jones, Michelle Cusseaux, Natasha McKenna, Sandra Bland, Breonna Taylor—these are only a few of the dozens of women who have wrongfully lost their lives and whose deaths remain unremarked upon because of their race and their gender. The story of the unnamed woman in Judges repeats itself daily across America.

As difficult as these stories are to hear, and as tempting as it is to let these stories remain untold and lost to the corners of history, if we are to be a church where Black lives matter, we can no longer look away. We must remember and name all these women, both ancient and modern. It is time to speak out and to act so that no other women suffer the plight of the unnamed concubine. It may be too late to protect the woman in Judges or Atatiana Jefferson, but our society still has time to protect future generations. But to do that, we cannot look away. We must remember their names and see them for who they are.