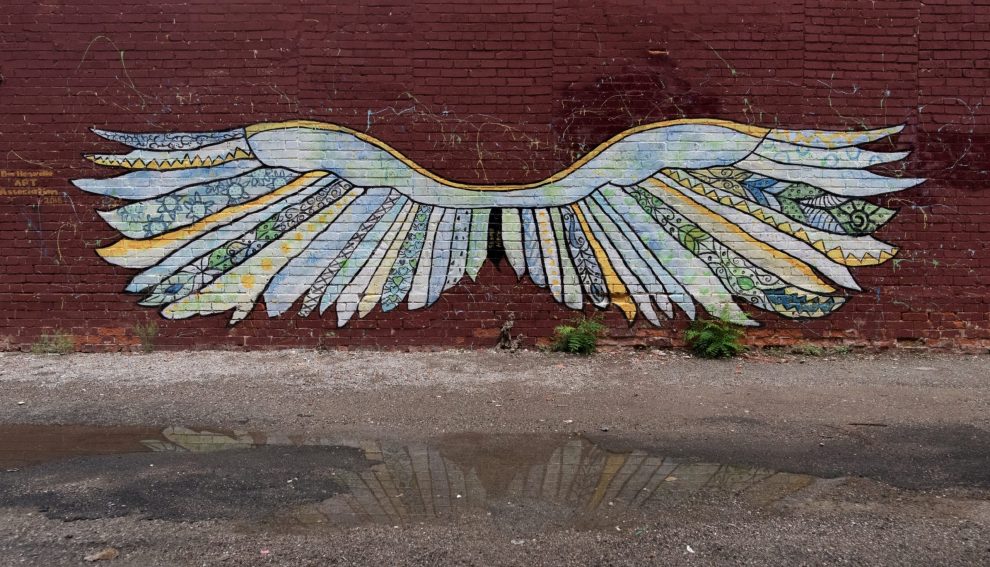 Around the turn of the millenium, British scholar Emma Heathcote-James set out to collect stories of modern day angel encounters. She placed a classified ad seeking personal accounts of angelic contact and was startled at the number of people who eagerly came forward to share their experiences. The reports rolled in from across a wide swath of cultural and religious identities, including many who claimed little interest in spiritual matters. Heathcote-James ultimately archived and analyzed more than 800 such stories for her book Seeing Angels: True Contemporary Accounts of Hundreds of Angelic Experiences (John Blake Publishing Ltd.).

One of the stories that was submitted by a woman who notes that she is not at all religious begins:

“About ten years ago I was sitting quietly. I was not ill. I had nothing in particular to worry me. I was not asleep. What I saw and felt was nothing like a dream. I felt that I was looking into a cave made of sheets of blue light. I felt as if I was moving towards the cave. Then I realized it was not a cave but a winged being.”

The event’s narrator says that she unexpectedly found herself enveloped within the wings of an angelic being. Additionally, she sensed a non-verbal message emanating strongly from the presence. Its meaning, she says, could best be conveyed in a quote she later read on a prayer card: “All is well, all is well and all manner of things are well.”

That famous text from Julian of Norwich makes for a natural extension of “Do not be afraid!” —the greeting that angels offer when they appear in the New Testament. We ourselves live in fearful times, where perceived threats are amplified by a breathless 24-hour news cycle. It’s no wonder then, that angels have become a pervasive fixture of our popular culture—a celestial balm for our earthly anxieties—with angel channeling workshops and angel energy healings sidling up surprisingly close to the mainstream.

The word angel derives from the Greek angelos, which, like its Hebrew equivalent, mal’akh, means messenger. In these days of fretful disquiet—while society seems to change faster than we can adapt to its rearrangements—many are hungry for a message from above, for some clear sign of the meaning of it all.

Regarding angels, the teaching of the Catholic Church is unequivocal. “The existence of the spiritual, non-corporeal beings that Sacred Scripture usually calls ‘angels’ is a truth of faith,” professes the Catechism of the Catholic Church. A few lines further on we read, “From its beginning until death, human life is surrounded by their watchful care and intercession. Beside each believer stands an angel as protector and shepherd leading him to life.” Not only do angels exist, says the church, they dwell among us as constant companions.

While the church teaching is clear as pure ether, scriptural accounts raise as many questions as they answer about the nature of angels. Christian theologians have nearly always agreed that angels are not divine beings per se, but creatures made by God. Yet a number of related questions—Were angels created before the material world, or after? Can angels sin? Why did some angels fall and become demonic? Can fallen angels repent?—were debated vigorously in the ancient world. The medieval philosopher Saint Thomas Aquinas—sometimes called the Angelic Doctor—offered an exhaustive analysis of all matters angel within the text of his massive tome, the Summa Theologiae.

One question he addresses at length is whether angels possess physical bodies. Certain passages in scripture suggest that they do. The three angels who visit Abraham at Mamre share in his food and drink, which certainly implies corporality. A singular passage in Genesis suggests that fallen angels may have had sex with mortal women and begotten children with them; again, a body would be useful for such pursuits. The famously coherent Aquinas—arguing that angel nature is purely spiritual—finds himself twisted into knots attempting to explain the existence of such spawn, betraying his archaic understanding of reproductive biology in the process.

Fascinatingly, Aquinas’ related discussion of angels and location (can a non-physical being be said to occupy physical space?) veers into territory that aligns with certain principles of modern particle physics. Biologist Rupert Sheldrake indicates some parallels between Aquinas’ thinking and our current understanding of quantum theory in The Physics of Angels: Exploring the Realm Where Science and Spirit Meet (HarperCollins), a collaboration with Episcopal priest Matthew Fox.

For instance, Aquinas says that angels can be located in space, but that it is the activity of an angel, rather than its mass (since it has none), that reveals its location. Sheldrake compares the medieval theologian’s description of angels with the way modern physicists describe photons—the particles (or are they waves?) that make up visible light. A photon has no mass, he says, but can be characterized as “a quantum of action.” That is, photons, like angels, are discrete, non-physical entities “localized through their action.”

In her novel set during the Genesis flood story, Many Waters (Farrar, Strauss, and Giroux), Madeleine L’Engle—most famous for the Newbery Medal winning A Wrinkle in Time (Farrar, Strauss, and Giroux)— pursues a similar line of thought. “I suspect that you also understand that energy and matter are interchangeable,” says one of the angels—a seraph called Adnarel, addressing a human character from the modern age. He invokes Einstein’s Theory of Relativity to explain that he is able to take on a physical form while residing on Earth, but that he is not bound by that form. This insight of contemporary physics—that the veil separating energy and matter is thin—offers the modern intellect ways of imagining the relationship between the angelic and earthly realms that would have been inaccessible to the medieval mind.

Mystics across the ages have described angels as made up of either light or fire, making the link between angels and photons particularly apt.

In her autobiography, St. Teresa of Avila describes an angelic visitation, saying “his face was so aflame that he appeared to be of the highest ranks of angels, who seem to be all on fire.” The event leaves her “utterly consumed with a great love of God.”

Hildegard of Bingen, the 12th century abbess and polymath writes, “The angels surround God in their glowing fire, for they are living light. They do not have wings like birds but are still hovering flames in the power of God.” The light of the angels in both of these visions, it is understood, shines forth out of the brilliant incandescence of God’s wisdom and love, which the angels share in and reflect.

Hildegard also relates an account of how some angels came to fall away from God’s light and become demons. Lucifer fell, she says, because “in his conceit he no longer comprehended the source of [his] light.” Believing the light to come from within himself rather than from God, he commits the sin of pride, and finds himself straying onto the darkest of paths. Alienated from God, the radiance of the angelic flame is snuffed out.

Many of the angels of contemporary popular culture have been divorced from all connection to traditional religious belief in God. In some of these expressions of post-Christian angel spirituality, I sense a genuine seeking for deep truths. But others carry more than a whiff of the consumerist mentality. “The angels help us to bring our bodies back to their optimum healing abilities,” claims a website dedicated to angel energy healings. Here, angels become tools we take up in pursuit of physical optimization, much as we might adopt a vegan diet or a cocktail of herbal supplements.

Another similar website pronounces, “An Angel Healing Therapy session can provide a feeling of increased well-being and balance, reduce stress, anxiety and feelings of unease…” Angels are placed in the role of therapists, called upon at our convenience, whose job it is to soothe us. These gently luminous masseurs for the spirit are a far cry from the blazing, fiery messengers of divine intention that the Christian mystics describe. They are here not to wrestle with us, but to comfort and coddle.

The Biblical angels, on the other hand, often come carrying messages that are difficult and deeply uncomfortable. An angel appears in a dream to Jacob with instructions to pick up stakes and, along with his wives and sons, travel the long road through the desert back to the land of his ancestors (Gen. 32). The most famous angel visitation story of the Christian tradition tells of a young, unwed peasant woman—barely more than a girl— who is told that she is to bear a son who will reign over her people for all the ages to come (Luke 1:26-38). This is a most confusing announcement that upends in the extreme Mary’s expectations of what life holds for her. And yet, “Do not be afraid,” says the angel.

In a 2018 homily on the Feast of the Guardian Angels, Pope Francis spoke about some potential snares that we can encounter as we go through life: “There is the danger of not going on the journey. And how many people settle down, and don’t set out on the journey, and their whole life is stalled, without moving, without doing anything . . . The angels help us, they push us to continue on the journey.” This is a different take on guardian angels than the one we usually hear, where angels move us out of harm’s way.

The pope suggests that it is the mission of angels to challenge us as much as to comfort us—to recognize when what we really need is a good kick in the pants. Using this lens, we might view the directive, “Do not be afraid,” differently. Instead of a blandishment reassuring us that, “All is well,” it reads as a command to be brave, to marshal our inner resources and rise to the challenges the world presents to us. Scripture tells us that “perfect love casts out fear” (1 John 4:18). The angel’s “Do not be afraid,” then, also orients us toward our ultimate purpose here: to shape from the imperfect clay of our human selves vessels for a divinely perfect love.

Writer and ethicist David Albert Jones states that by reflecting on angels, we can “retrieve a sense of human beings, not as masters of a world that is devoid of meaning, but as pilgrims sensitive to moments when meaning is revealed.” If, as the church teaches, we understand our world to be populated with angelic messengers— heralds who bear the blaze of God’s love across the divide between heaven and earth—then we are called to approach life with our eyes, ears, and hearts open to their messages. And when the message lands, to greet the moment without fear.