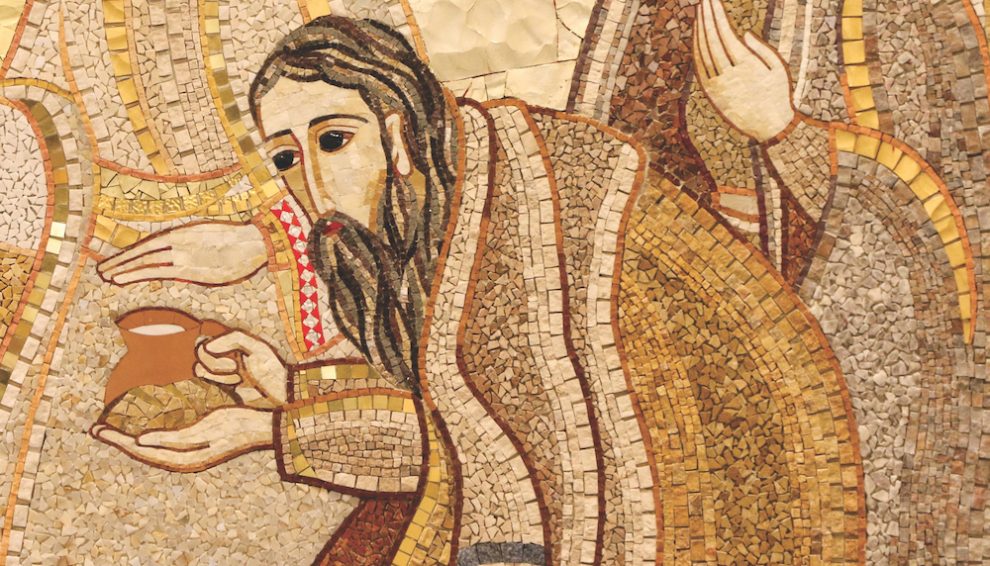 In the Good Friday intercessions, we don’t pray for “perfidious Jews” or for the “conversion of the Jews” anymore. Those sentiments were removed half a century ago. Now, we ask “that the people you first made your own may attain the fullness of redemption.” The prayer also speaks of God’s promises to “Abraham and his descendants.” But there’s a third party—beyond Christians and Jews—who also makes a claim on Abraham and doesn’t appear in the Good Friday liturgy—at least not in so many words: Muslims.

The Good Friday intercessions include prayers for Jews, other Christians, believers who don’t believe in Christ, and nonbelievers. With Christianity’s genesis in Judaism, it makes sense that there’s a unique Good Friday prayer for Jews and one for other Christians, with whom we share faith in the same redeemer. While the prayer for other believers includes Muslims, as Abrahamic monotheists—that is, those who pray to the same God as Catholics—with a reverence for Jesus, they seem to stand apart. Although Muslims don’t, as the Second Vatican Council’s Nostra Aetate (Declaration on the Relation of the Church to Non-Christian Religions) states, “acknowledge Jesus as God, they revere Him as a prophet.” Further, Lumen Gentium (Dogmatic Constitution on the Church) recognizes Muslims as being in the “plan of salvation.”

So why don’t we pray separately for Muslims, especially during a time when anti-Muslim hate crimes in the United States and anti-Christian persecution in Muslim nations are pervasive?

A first objection is practical: If we include a prayer for Islam, then shouldn’t we include many other faiths? Gabriel Said Reynolds, professor of Islamic studies and theology at the University of Notre Dame, says that Islam can be tricky for Catholics to come to terms with because “it came after Christianity and taught unorthodox things about the prophets, Jesus, salvation, etc.” One of those unorthodox teachings is a fundamental principle of Islam: The revelation that began in the Hebrew Bible and continued in the New Testament is completed in the Quran. The idea that the Quran is a special revelation subsequent to the New Testament may challenge Christians, a supersessionist discomfort that must strike Jews as ironic.

Reynolds also notes both Islam and other religions that arose after Catholicism—including Protestantism and Bahaism—“have traditionally been seen as heresy.” However, Catholics still haven’t denied other Christians a Good Friday prayer. Reynolds says, “Today, in the spirit of ecumenical and interreligious dialogue, we tend not to think of heresies that divide us but common elements of faith that unite us.” Perhaps the common link to Abraham offers space for including Islam in Catholic liturgy.

A perhaps plainer reason for the lack of such a prayer is that Islam now succeeds communism as the perceived enemy of the Christian West. Geopolitics isn’t a reason to include a prayer for Muslims—which, for some, would be appeasement—but neither is it a reason to reject one. Again, the heretical beliefs of other Christians, which also created geopolitical disputes, didn’t prevent them from being recognized in the Good Friday intercessions.

Islamic tradition traces its faith directly to Abraham, but according to John Borelli, special assistant to the president for Catholic identity and dialogue at Georgetown University and former United States Conference of Catholic Bishops associate director of the secretariat for ecumenical and interreligious affairs, “Official Vatican texts have taken a careful line on how Muslims are Abrahamic.”

Borelli cites examples of major church pronouncements regarding Islam that acknowledge but do not formally adopt their claim regarding descent from Abraham. In 1964, for example, Pope Paul VI spoke in Bethlehem to, in his words, “those who profess monotheism and with us direct their religious workshop to the one true God, most high and living, the God of Abraham.”

Pope John Paul II, who often spoke to and about Muslims, took things a bit further. In Turkey in November 1979, he said, “Faith in God, professed by the spiritual descendants of Abraham—Christians, Muslims and Jews—when it is lived sincerely, when it penetrates life, is a certain foundation of the dignity, brotherhood and freedom of men and a principle of uprightness for moral conduct and life in society.” A few years later, in 1985, he struck a similar note at a colloquium on Christianity and Islam: “As I have often said in other meetings with Muslims, your God and ours is one and the same, and we are brothers and sisters in the faith of Abraham.” In 1999 he quoted himself, repeating this same message to a general audience. Perhaps adopting a theme, Pope Francis has also spoken of fraternity among Christians and Muslims.

Borelli also refers to Nostra Aetate and Lumen Gentium, which both speak respectfully of Muslims, saying that their words are “carefully weighed.” Nostra Aetate says: “The Church regards with esteem also the Moslems. They adore the one God, living and subsisting in Himself; merciful and all-powerful, the Creator of heaven and earth, who has spoken to men; they take pains to submit wholeheartedly to even His inscrutable decrees, just as Abraham, with whom the faith of Islam takes pleasure in linking itself, submitted to God.” Lumen Gentium asserts “the plan of salvation” includes the Muslims, “who, professing to hold the faith of Abraham, along with us adore the one and merciful God.”

Compare these statements to the paragraph following the section on Muslims, in which Nostra Aetate speaks of the “bond that spiritually ties the people of the New Covenant to Abraham’s stock,” where that “stock” is the Jews: “The Church, therefore, cannot forget that she received the revelation of the Old Testament through the people with whom God in His inexpressible mercy concluded the Ancient Covenant.”

When both Vatican II documents consider believers in the world’s other great religions, Muslims are next to Jews—just after in a list that begins with Jews (Lumen Gentium) and just before in a list that leads to and concludes with Jews (Nostra Aetate). The church’s relationship with Muslims may not be as foundational as with Jews, but because Muslims are not simply “those who do not believe in Christ,” it may be closer in many ways than with the others—perhaps reason for a unique prayer.

If the church were to add such an intercession, how would Muslims respond? Borelli says, “I think Muslims would be grateful if a particular prayer that was respectful to them as Muslims was said on Good Friday.” More cautious, Reynolds worries that if the prayer “has the underlying sense of ‘pray for their conversion,’ certainly Muslims will not be happy about it.” Then again, it seems unlikely the church consulted any other groups before mentioning them on Good Friday.

Will the church ever add a prayer for Muslims to the Good Friday liturgy? In the near term, it seems doubtful at best. They are already included in the prayer for believers who do not believe in Christ. No one is agitating for one, and in an atmosphere of mistrust between Christians and Muslims, it seems unlikely one would even be introduced. Still, it seems a case could be made, and perhaps by a seemingly unlikely source.

Almost a year to the day before September 11, 2001, Pope John Paul II, not known as an appeaser and who would be the first pope to visit a mosque a few months later, lamented the “bitterly ironic” fact that many conflicts “are between believers who worship the one God, who look to Abraham as a holy patriarch.” He continued, “Each act of violence makes it more urgent for Muslims and Christians everywhere to recognize the things we have in common, to bear witness that we are all creatures of the one merciful God, and to agree once and for all that recourse to violence in the name of religion is completely unacceptable.” Rather, he hoped, “Religion is the enemy of exclusion and discrimination” and “ought to be a stimulus for solidarity and harmony between individuals and among peoples.” In this vein, it’s important to suggest that a Good Friday prayer, like the other intercessions, would be for people, not a religion—for Muslims, not Islam.

A Good Friday prayer is hardly the solution, but it could be a stimulus for the harmony Pope John Paul II had in mind. A prayer might obey the spirit (while flouting the geopolitical impracticality) of “love your enemies and pray for those who persecute you” and “turn the other cheek.” It might also diminish the sense of “enemy” in that context. God would hear the prayer. Muslims would likely listen—if with suspicion. Ultimately, one hopes the people offering the prayer would be receptive. After all, sometimes prayer does more for the one praying than for the intended beneficiary. In a time when religious differences are at the center of so many international conflicts, perhaps some liturgical recognition might promote peace. And, if we dismiss that possibility, it seems we’re wasting our time.

Glad You Asked: Why do we kneel in church?