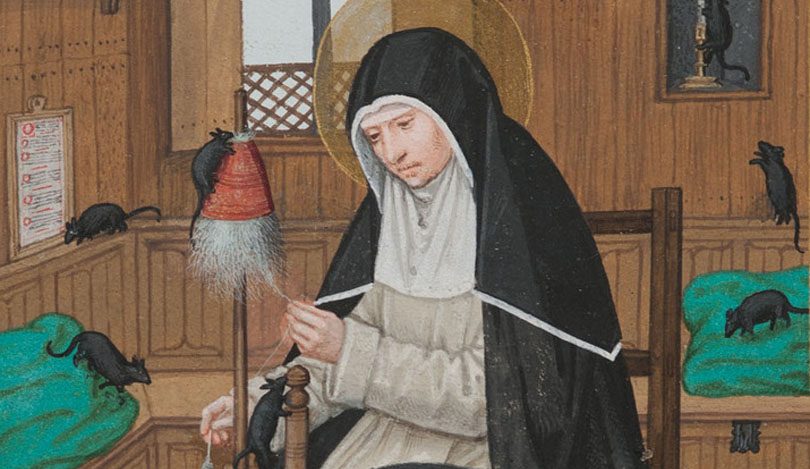 According to no less an authority than Etsy, the patron saint of cats is a woman named Gertrude of Nivelles. Not to be confused with St. Gertrude the Great (of Helfta), this St. Gertrude appears among Etsy’s wares—from prayer cards to paper doll sets—as a youthful, haloed nun cradling a cat in her arms like a baby. More kitschy than devotional, most of the Etsy items don’t explain who Gertrude of Nivelles was or how she got to be the designated cat lady of the Catholic Church.


In this age of viral cat videos and kitten memes for every occasion, it’s no surprise that cats have a saint of their own. Yet in the Christian West, the treatment of cats hasn’t always been one of appreciation and protection. So when did the church have a change of heart when it comes to our feline friends? And of all the saints, why Gertrude of Nivelles? Who was this holy woman with the cat in her arms?

Gertrude was born in Nivelles (a city in modern-day Belgium) in 626 into a family of wealthy nobles. Her father, Pepin I, was mayor of the palace of Austrasia under the Frankish kings Clotaire II, Dagobert I, and Sigebert III. Her mother, Itta, was believed to be the daughter of the bishop of Metz. Gertrude was the fourth and youngest child in the family.


In the Middle Ages, aristocrats acquired power through strategic intermarriages with other noble families. Pepin arranged such a marriage between his elder daughter, Begga, and the son of another powerful bishop, a union that eventually led to the founding of the Carolingian dynasty; their son Pepin II became ruler of the entire Frankish empire.

According to a medieval biography of Gertrude, Pepin had similar designs for her. When Gertrude was 10 years old, Pepin hosted a banquet for King Dagobert, during which the king asked Gertrude to marry the son of a duke. She refused him, stating she would neither marry him nor any man, but would take Christ alone as her bridegroom.

Gertrude fulfilled this promise with the help of her mother. Upon Pepin’s death in 640, Itta was confronted with the question of how to protect her young daughter from predatory suitors hoping to ally with her family’s wealth and power. This was a time when men not uncommonly kidnapped young women and girls for marriage. On the advice of a bishop, Itta built a double monastery in Nivelles, one for men and one for women. She appointed Gertrude as the abbess of the women’s monastery and entered religious life there herself. When Itta died in 652, Gertrude took over the entire monastery.

As abbess of Nivelles, Gertrude left the administration of the monastery to other trusted nuns and monks so she could devote more time to studying scripture and caring for the sick, elderly, and poor. She used the property her mother willed to her to build churches, monasteries, and hospices. Nivelles became well-known for its welcome of pilgrims, both lay and religious. Among these pilgrims were two Irish brothers, Follian and Ultan, who built a monastery on a tract of land called Fosses that had belonged to Itta and Gertrude.

By the time Gertrude was 32 years old, she had become so weak from constant fasting and keeping vigils that she resigned as abbess and appointed her niece as her successor. Her biography claims she spent her last days praying intensely and wearing a hair shirt.

In March 659, sensing her death was near, she sent a monk to Fosses to ask Ultan if he knew the hour of her death. Ultan predicted she would die the next day during Mass. His prophecy became true: Gertrude died on March 17 at the age of 33.

Gertrude was venerated as a saint immediately after her death, with churches erected in her honor and many miracles attributed to her. One miracle that seems to have occurred in her lifetime involves an ocean voyage by her Irish monk friends, during which a sea monster appeared and threatened to capsize their ship. Upon invoking Gertrude’s name, the sea monster suddenly disappeared and the monks survived. The story of this miracle explains the origins of a drink called “Sinte Geerts Minne” or “Gertrudenminte” commonly taken by seamen in the Middle Ages to ensure a safe journey.

Today, March 17 marks St. Gertrude’s feast day. Each fall, Nivelles holds Le Tour Sainte-Gertrude, a traditional procession around the city that draws up to 2,000 pilgrims and culminates in a Mass with the relics of Gertrude on display. The patron saint of Nivelles, Gertrude is also the patron of travelers and gardeners and is invoked against mental illness, rats, and mice.

But what about cats?

Despite what the craft-makers of Etsy may claim, there’s no official documentation or old tradition naming St. Gertrude of Nivelles as the patron saint of cats. The first known association of Gertrude with cats goes only as far back as 1982 with the publication of a catalog on “metropolitan cats” by the Metropolitan Museum of Art in New York. It seems unlikely, however, that her current devotion by cat lovers would originate with an obscure catalog.

A likelier reason is Gertrude’s association with rats and mice. Representations of Gertrude going back to the Middle Ages portray her with a rodent or two scurrying around her feet or running up the staff of her crozier.

Gertrude’s intercession to ward off disease-carrying rodents would have made her an important saint to call upon when much of Europe was decimated by bubonic plague. Since cats are the animal most people think of as the natural predator of rats and mice, it doesn’t take much imagination to extend Gertrude’s patronage to protecting cats.

Perhaps the reason this association is fairly new is because of Christianity’s longstanding love-hate relationship with cats. Venerated as sacred animals in ancient Egypt, Egyptians domesticated cats as house pets. Phoenician traders introduced cats to Europe by the 5th century B.C.E. Although house cats were less common among the early Greeks and Romans, they were valued for keeping the vermin population down. Early Christians afforded cats the same respect and tolerance. But by the Middle Ages, cats were the frequent victims of superstition and abuse, associated with witchcraft and the “pagan beliefs” of pre-Christian religions.

There’s disagreement among historians today about how badly cats fared during the darkest days of the medieval church. Pope Gregory IX, who reigned from 1227–1241 and founded the papal inquisition, is still credited for a continent-wide cat purge to root out heresy from Christendom.

In 1233 Pope Gregory IX issued Vox in Rama, which condemned “Luciferianism” in Germany based on reports by a local preacher that Catholics were practicing demonic rituals involving the worship of a large black cat. It can never be known how many cats were tortured or killed as a result, but the lingering superstition against black cats almost 800 years later is an indication of how bad it might have become for Inquisition-era felines.

Further evidence of the medieval church’s prejudice against cats lies in yearly festivals like Fastelvn in Denmark and Kattenstoet in Ypres, Belgium. During Fastelavn, a pre-Lenten celebration originating before the Protestant Reformation in Denmark, villagers would put a black cat in a barrel and then beat the barrel with bats until the cat finally managed to escape. The idea was that when the cat ran off, evil spirits were banished from the village with it. Today, revelers settle for painting a cat on a barrel filled with candy.

In Belgium, Kattenstoet was celebrated as an Easter festival in the 13th century then moved to the second week of Lent by the 15th century. The main event of Kattenstoet involved throwing live cats and kittens from a belfry. Ypres still holds the festival but uses stuffed toy cats.

But then there are the more positive examples of human-cat relations in the church. Like the legend of the “mark of Mary,” a story that my cat-loving aunt (who never owned fewer than three cats at a time) told to me (who currently keeps company with four). According to the legend, soon after giving birth to Jesus, Mary had trouble quieting her baby as he lay crying in the manger. A stray cat appeared and crept into the manger to snuggle alongside baby Jesus, comforting him and causing him to fall asleep at last. In gratitude, Mary patted the cat’s head to give it her blessing, leaving an “M” mark that is seen on the forehead of many a tabby cat today.

Another example of the bond between Christians and cats is a 9th-century Irish poem that was found in a manuscript in an Austrian monastery about a scholar and his white cat, Pangur Bán. In the poem, the scholar describes the affinity between the intellectual rigors of monastic study and writing and his pet’s intensely focused hunt for prey: “I and Pangur Bán, my cat / ‘Tis a like task we are at / Hunting mice is his delight / Hunting words I sit all night.”

One of the most famous poems in Irish literature, many modern poets such as W.H. Auden and Seamus Heaney have published their own translation of this poem. Pangur Bán was even a character in the 2009 animated film The Secret of Kells, about a boy growing up in a monastic community in medieval Ireland who dreams of learning the art of illuminated manuscripts.

Cats were ideal and valued companions for monks and nuns in the Middle Ages, and it would come as no surprise if Gertrude and her religious sisters, or her Belgian and Irish religious brothers, kept cats in their communities.

Considering the church’s checkered history of its treatment of cats, cats have long deserved and needed a patron saint of their own. And considering what we know about St. Gertrude of Nivelles, she’s a good choice to serve the role. The young girl who defied a king, refused marriage, left the busy administration of her monastery in the hands of others so she could go off by herself and pray, and took to wearing a hair shirt in her final days is a fitting human counterpart to the domestic cat, a creature known for being resolutely independent, constantly contrary, frequently lonerish, and prone to mysterious habits that never make sense to its human owner, who loves and accepts cats as they are anyway.

St. Gertude of Nivelles, patron saint of travelers, gardeners, and yes, cats: Catholic cat lovers and our misunderstood feline friends are happy you have our backs.