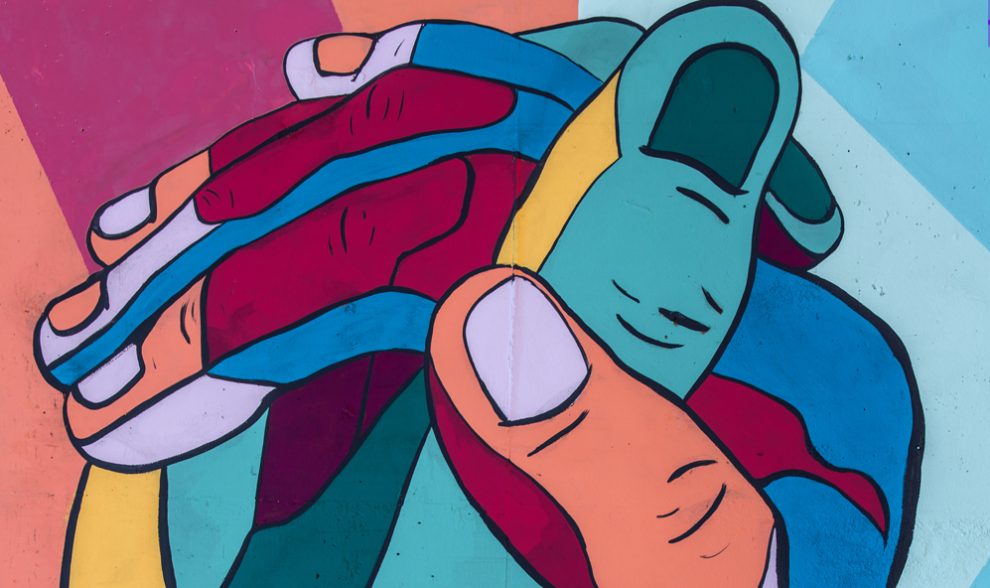 A legendary African American musician stood up and told the story of how he collects robes from former KKK members. His strategy for getting them to leave the movement? He befriends them.

A former Wall Street banker talked about how he quit his job to go traveling around the United States, hanging out in McDonald’s franchises in places like Gary, Indiana, and listening as the people there told him about their lives––lives marked by poverty, but also family and faith.

The Cook County public defender spoke about how she came to forgive the young man who––on a lark during his third year of high school––coldly murdered her sister, brother-in-law, and their unborn child.

These were just three of the speakers that graced the main stage in a large Manhattan’s Metropolitan Pavilion during the seventh annual New York Encounter, which was held in Manhattan from February 14-16, 2020. The Encounter is a three-day public cultural event put on by Communion and Liberation, a Catholic movement founded by Servant of God Father Luigi Giussani in 1954 with the aim of connecting traditional Catholic values with the realities of the modern world. Combining exhibits, performances, and lectures by high-profile speakers––some Catholic, some not––the event responds to a specific theme, such as “Reality has never betrayed me” or “From I to We.” This year’s theme, “Crossing the Divide,” was especially resonant given the current political situation in the United States and beyond.

One of the first panels of the event, “A Place for Life,” discussed family––a term defined broadly and inclusively––as a seed of community and connection. One speaker on this topic was Sarah Hemminger, co-founder of Thread, an organization that seeks to close academic achievement gaps in Baltimore schools. The network of students and volunteers is structured like a family. “If we want young people to go to school, we need to take them to school. If we want them to not give up, then we need to not give up on them,” said Hemmiger. “We need to move from saying ‘You matter,’ which is a pretty low bar, to ‘I need you.’”

Another speaker on this panel, Catholic News Agency editor JD Flynn, spoke about being the parent of three children––two of whom are adopted and have Down syndrome. “These children live on what Pope Francis has called ‘existential peripheries.’ If they are seen at all, it is as mascots rather than persons,” he said. “But family can be a place that resists the lie of technocracy, the idea that our lives have value because of what we do, make or produce. I used to think my value lay in what I do, but now I see it comes from just seeing one another as persons. God is not after checklists but real intimacy with us. Some of God’s most beloved people are those who don’t make marks on a scorecard.”

In a talk on “Bridging the Divide in the Most Unlikely of Places,” Father George Williams, chaplain of the death row at San Quentin State Prison in California, stated that ministering in this environment which he describes as “a hell on earth as large as a city block” has given his life profound meaning. “The words of the Gospel take on a different resonance here. Jesus was an executed prisoner. He was innocent, of course, and these men are not. But if Jesus did not come to bring light to these people, what difference would our religion make?”

His talk was paired with one by Jeanne Bishop, Cook County Public Defender, whose sister was brutally murdered as a young woman. “The least effective way to honor her memory would be to live with bitterness. Hating another person is like drinking poison and expecting the other person to die,” she said, after telling her story. After two decades she came to pray for her sister’s killer, then to write him a letter, then to meet him and shake the hand that had pulled the trigger. “God wants us to break the divided, to see the worth of all, even the worst, and to never give up on anyone, just as God has never given up on us.”

Writer Chris Arnade, a former Wall Street banker who has documented poverty across the US, spoke of the division he sees as our nation’s biggest: a gap between what he calls the educated, individualistic, upwardly mobile “front row,” and a diverse “back row” that lives by a different set of values: place, race and faith. “Break out of your bubble. Walk around your town or city,” he urged us in the audience, who had to acknowledge we were primarily “front row” people of high education. “Go to the McDonald’s in the ‘worst’ neighborhood; sit down and talk. If you do charity work, make sure you are really invested in it. Don’t be scared about getting more involved than may seem appropriate. Life is messy. There are good and bad people in both rows.”

Perhaps one of the most compelling presentations, “A Paper Thin Distance,” spoke of people who removed themselves from hate groups and other extremist movements. One of the speakers was Christian Picciolini, a former neo-Nazi who left the movement and eventually founded Free Radicals, a global organization that helps people to leave hate groups. Speaking of how he’d been recruited by a skinhead at the age of fourteen, he said, “I was looking for connection. If a group of ballerinas had come up to me, maybe today I’d be the best dancer around . . . I challenge you to find someone who is undeserving of your compassion and give it to them anyway. They may be the one who can benefit from it most.”

His talk was paired with a presentation by musician Daryl Davis, who grew up not understanding why anyone could hate him for the color of his skin. After the assassination of Dr. Martin Luther King Jr.––when Davis was 12­­­­––he decided to devote his life to seeking answers to hatred. Today, he collects robes from KKK members whom he has convinced to leave the movement by befriending them and talking with them. Speaking of the white supremacist rally in Charlottesville in 2017, he said, “This can happen anywhere there’s unaddressed hatred. If you are an American, every U.S. city is your city. Let’s agree not to sit back and see what this country becomes, but to stand up and make it what we want to see. It starts with conversation.”

For me, the New York Encounter proved an inspiring event which, though rooted in the Catholic faith, seeks to cross religious and cultural boundaries. In many areas of my life, I seek to cross the divide. I am the liberal Democrat daughter of two ardently Republican parents, a Ph.D. holder from the U.S. “front row” working with first generation college students who often come from poverty, and a Spanish-English translator who volunteers with Latin American immigrants. In a time when people increasingly choose to hunker down behind ever narrower identities, this call to cross the divide is a challenge worth taking.