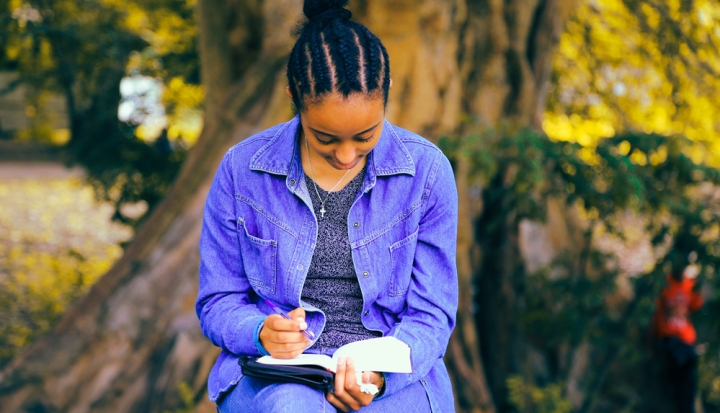 It’s late morning on the Tuesday of Holy Week. I’m fumbling around my desk when an email flashes across the computer screen. “homily partner?” reads the subject line.

My heart skips a beat.

I click on the message. The presiding minister of the Easter Vigil wants to know if I would consider working on the homily with him. The Gospel of Luke is up this year—the story of the women at the tomb.

I reply immediately, giddy and grateful for this most mysterious invitation.

“How can this be?” I wonder while lugging a wheelbarrow full of gospel commentaries out of the library.

The answer plays out in the days that follow, days thick with prayer and possibility. I dive headfirst into the text. Lectio divina becomes my lifeblood. The women at the tomb become my sisters.

On Good Friday the presiding minister and I meet to compare notes.

Then we preach the homily.

At the end of the vigil gospel, he leaves his presider’s chair. I walk up from my pew. We meet by the altar. Back and forth we tell the story of Jesus’ triumph over death. Side by side we preach the Good News first preached by women 2,000 years ago: Jesus Christ has been raised!

Indeed, the holy building shakes with joy. It feels electric.

As a child I used to sit in the front pew and mimic the priest during the homily. I imagined myself standing by the altar telling stories about Jesus. I never saw girls behind the pulpit.

But I always looked.

Years later I would carry the same interest in homilies to seminary. There I fell in love with preaching, with the whole process—chewing over sacred texts, listening to God’s prompts, bringing the words to life with my voice. The pulpit tapped a deep spirit in me. I felt so alive preaching at midday prayers and on retreats. The community affirmed my gifts too.

Perhaps that’s what caused the hot tears to flow anytime anyone asked about women giving homilies. I sensed a call from God and the community to serve the church in this particular way, but I felt stuck. The norm of who can preach the homily seemed like a tightly wound fist. It just wouldn’t expand.

And then, on the holiest of nights, it did.

Whose role is it to preach the homily at Mass?

The bishops give a clear answer in Fulfilled in Your Hearing: the presiding minister.

Their reasoning emphasizes the integral tie between proclaiming the gospel and celebrating the Eucharist.

The Second Vatican Council’s “Decree on the Ministry and Life of Priests” notes: “There is an indivisible unity within the celebration of Mass between the proclamation of the Lord’s death and resurrection, the response of the hearers, and the [eucharistic] offering itself by which Christ confirmed the new covenant in his blood.”

Yet worshipping assemblies hear homilies from men other than the presiding minister all the time.

The General Instruction to the Roman Missal #66 says the presiding minister can entrust the homily to a concelebrating priest “or from time to time and, if appropriate, to the deacon.”

This clause expands the norm.

The church ordains deacons with special liturgical responsibilities. Even so, deacons cannot fulfill the particular role of the primary celebrant. Presiding ministers expand the norm any time they invite deacons to preach the homily—a common occurrence that happens (for good reasons) in congregations across the world.

Why isn’t a similar expansion of the norm being made more often for women, like what happened with me at the Easter Vigil?

Is scripture devoid of stories of women carrying the Word inside them and preaching the resurrection?

Does our tradition claim that only men are made in the image of God?

Have no women ever experienced theological formation?

Is there some sort of lesser Spirit that claims women in baptism and commissions us in confirmation, but doesn’t fully arrive until ordination?

The answer to all of these questions is, of course, a resounding no.

Like many issues in the Catholic Church, the exclusion of women from the pulpit is a patriarchy problem. It’s rooted in an unwillingness from many in the hierarchy to consider even the possibility that women could be equal conduits of God’s Word.

The presiding minister answered yes with his creative invitation at the Easter Vigil. He followed the norm by preaching the homily. He also expanded the norm by inviting a woman to preach alongside him.

This is the church we should strive to be: inclusive, collaborative, bold.

A church that cannot answer a resounding “yes, women do matter” is no church of Jesus Christ, the Son of God who expanded the norms of engaging women throughout his ministry. Jesus chats with a Samaritan woman as she draws water from a well and even asks her for a drink. His actions horrify the disciples. Male leaders were not to talk with women in public—the scandal! Jesus talks anyway.

He allows a woman who sinned to anoint his feet. This move risks breaking cleanliness laws. Not only does Jesus not stop the woman, he draws attention to her faithfulness and humanity when he tells Simon, “Wherever the good news is proclaimed in the whole word, what she has done will be told in memory of her.”

Jesus affirms Mary’s decision to forgo the typical female hostess role and sit at his feet, a place normally reserved for male disciples. “Mary has chosen the better place,” Jesus says, much to Martha’s chagrin. Another norm disrupted.

And, in one the most stunning encounters in human history, the newly risen Christ appears first to Mary Magdalene. He trusts her, a woman, with the primary task given to homilists ever since: Go. Tell the Good News of my resurrection. Let my disciples know I am very much alive.

Jesus does not let norms or rules box him in. He also doesn’t disregard them. As he tells the crowds, “I have not come to abolish the law but to fulfill.” Jesus’ actions expand norms and shift priorities for the good of the community, especially the marginalized. He comes to put the ultimate norm in place: love God and love neighbor.

This is the Son of God we worship in the eucharistic liturgy, whose life, death, and resurrection get broken open in the homily.

Can norms be expanded?

What might it look like for the church to expand its norms to include women among those entrusted with preaching the homily?

It isn’t so hard to imagine.

TagsGlad You Asked Liturgy Women in the church