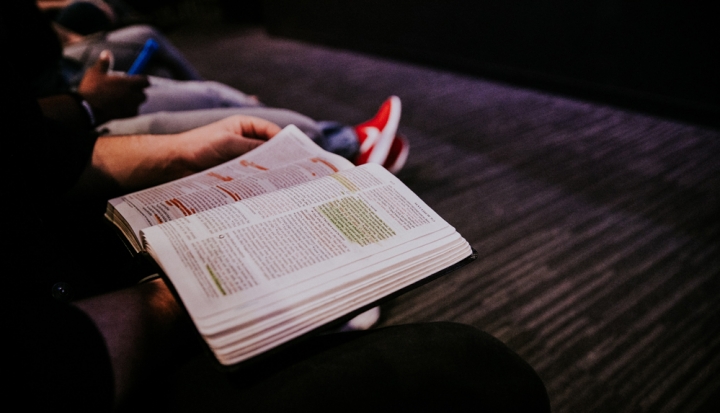 In a stroke of luck, I once found a cookbook that I had been planning to purchase—Beard on Bread (Knopf)—in a box labeled “free” along the curb. The best part of finding a used copy of this classic on bread baking? I was privy to the insights and recommendations of the book’s previous owner, who had scribbled throughout the margins. My favorite annotation was a note beside the second of two consecutive banana bread recipes: “This one’s better.”

If I were annotating the Book of Genesis, I’d write the same note next to the second account of creation (Gen. 2:4–25), which I prefer to the first account (Gen. 1:1–2:3). Although I love the poetics of the former, I can’t resist the latter’s imagery of God’s breath inflating life into the human made from dust.

In the five minutes I spent reading and considering the differences between these two passages, I engaged more deeply with the story of creation than I had in years. Even thinking about doodling notes in the first few pages of the Bible pushed me to read more carefully, pay closer attention to the intricacies of the language, and consider my internal reaction to the text. My impulse to annotate the Book of Genesis gave focus and energy to my reading of it. By this standard, writing in the Bible is a good thing.

On the other hand, Catholics view scripture as sacred, which begs the question: Is using a regular old Bic pen to mark up divinely inspired stories a sign of disrespect? After all, we are so careful with the Eucharist. Shouldn’t we show the same reverence for the word of God?

Not exactly, and here’s why: The word of God is not the Word of God. The Word of God—as in, “In the beginning was the Word, and the Word was with God, and the Word was God” (John 1:1)—is Jesus. The Bible, though inspired by the Holy Spirit and revered by the church as a source of nourishment for the people of God, isn’t. Although we ought to treat the Bible with reverence—we shouldn’t be writing expletives between the lines—it’s meant to be held, examined closely, dog-eared even.

The Second Vatican Council’s Dei Verbum (Dogmatic Constitution on Divine Revelation) states, “Since God speaks in Sacred Scripture through men in human fashion, the interpreter of Sacred Scripture, in order to see clearly what God wanted to communicate to us, should carefully investigate what meaning the sacred writers really intended, and what God wanted to manifest by means of their words.”

Although the words themselves remain static and unchanging, God speaks in new ways to each generation and each individual as they read the ancient text. Writing in the Bible—whether that’s underlining words, drawing question marks or exclamation points in the margins, or scrawling notes in the white space—is one way to “carefully investigate” the word of God and to encounter the living Spirit within it.

If annotating helps you experience the continuing revelation of the unchanging God, then not only can you write in the Bible, you should.