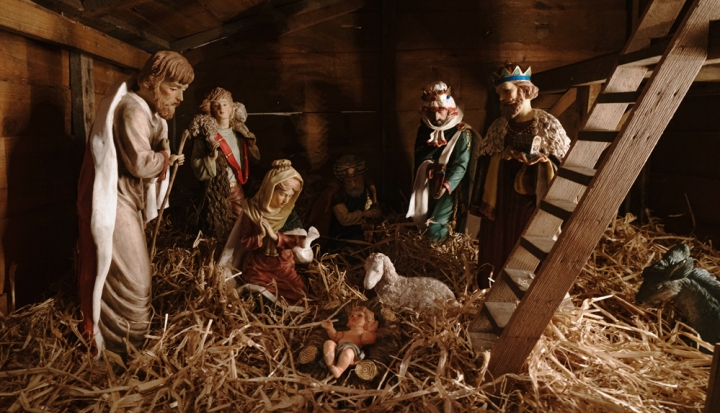 Growing up, my siblings and I would take turns arranging the figures in my parents’ large crèche. I liked to display the three magi walking in a procession up to the manger, showing them on their journey following the star to Bethlehem.

My siblings were more about cramming the three wise men, shepherds, angel, and various farm animals into a tight circle around the manger, all ooh-ing and aah-ing at baby Jesus. I put my foot down one year, though, when my brother tried to add a toy elephant to the crowd. The scripture, after all, says nothing about pachyderms.

My impulse toward literalness might have been a little misguided, however. It turns out that scripture doesn’t say a lot even about the nativity figures we take most for granted. Even whether infant Jesus lay in a manger may be up for interpretation.

There are two stories about Jesus’ birth, found in the gospels of Matthew and Luke. In Matthew’s story, Mary and Joseph already live in Bethlehem, so there’s no need for them to take refuge in a stable. Some magi (scripture never says there are three, by the way) follow a star to Jerusalem, where they enter Mary and Joseph’s house (Matt. 2:11). They warn the family about King Herod’s plot to kill the infant Jesus, and the family flees to Egypt. They later return and set up shop in Nazareth, never returning to their home in Bethlehem (Matt. 2:23).

In Luke’s version the magi are nowhere to be seen. Instead, it is shepherds who are the first to hear the good news of the savior’s birth. In this gospel, Mary and Joseph already live in Nazareth but have to return to Bethlehem for a census; this is what filled up the inns and necessitated Mary’s labor in a stable (Luke 2:7). After the census, we are left to assume the family returned peacefully to Nazareth with no extended detour to Egypt.

Some of the differences between the two gospels are due to their different purposes. With the flight to Egypt and Herod’s murder of the innocents, the author of Matthew portrays Jesus as the next Moses and describes how the infant Jesus fulfills several specific prophecies from the Hebrew Bible.

The author of Luke, on the other hand, sets up Jesus as a challenge to the Roman emperor, whose titles include “Son of God” and “Savior.” The message of the angel to the shepherds proclaims that here is a savior who will bring salvation not through political power and domination but instead through a radical shuffling of the social order, one that will lift up the lowly and feed the hungry (Luke 1:46–55).

While the differences between the two gospels may seem major, the important takeaway is  found in what the two have in common instead of in how they vary. Both infancy narratives depict a miraculous birth too important to keep private. The figures around Jesus, whether divine angels or human magi or shepherds, waste no time in spreading the good news of his birth.

The laypeople seeking a monastic life in the modern world