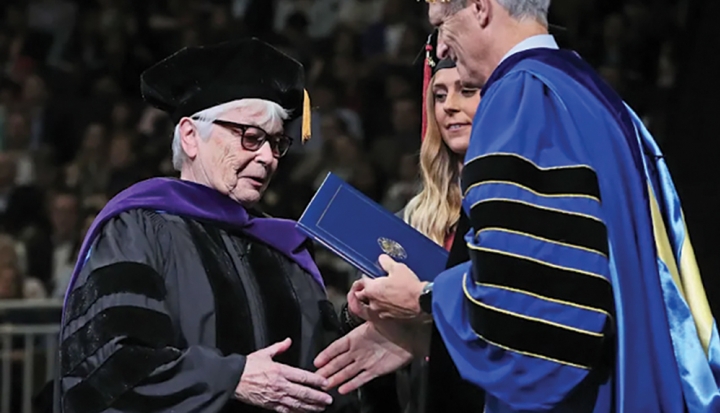 Two nuns in a condo. That’s all Casa Cornelia Law Center was in 1992 when it began. The San Diego-based pro bono immigration law center now employs more than 30 full-time staff members and hundreds of volunteers. Since its beginning, the law center has provided critical legal assistance and humanitarian protection to more than 15,000 vulnerable men, women, and children.

One of those nuns, cofounder of Casa Cornelia, is Society of the Holy Child Jesus Sister Ann Durst. “What began very simply and in a very small way is now a very important piece in the delivery of justice with compassion to the immigrant community in San Diego County,” Sister Ann says. “It’s an important little effort, a modest effort when one considers the global situation. This is just a very small piece.”

Raised in Waukegan, Illinois, Sister Ann had a vested interest in immigration from the beginning. “It was in me,” she says. The granddaughter of immigrants—Irish on her mother’s side and German-speaking Luxembourger on her father’s side—Sister Ann grew up in a diverse, vibrant community filled with different ethnic churches and immigrant groups.

Like many Catholic women did after high school during the mid-1950s, Sister Ann answered a call from God and joined a religious congregation, the Society of the Holy Child Jesus (SHCJ).

“I believed I had a vocation. I believed this is where God wanted me to be,” she says.

SHCJ is primarily an educational order, so Sister Ann began her vocation working in parochial schools across New York and New Jersey before serving as president of Rosemont College in Rosemont, Pennsylvania for seven years. She then received her law degree from Georgetown University Law Center and began providing legal counsel to the Pennsylvania State System of Higher Education.

After counseling university presidents for four years, Sister Ann felt her vocation changing again. “I realized that I wanted to do something that responded more to the plight of the immigrant,” she says.

At the direction of her congregation, Sister Ann traveled along the U.S.-Mexico border from Brownsville, Texas all the way to San Diego. Together with Sister Mary Wayne Gradon of the European Province of SHCJ, they decided that, as one of the busiest land border crossings in the world, San Diego was where they would set up their mission for the poor. They signed a lease, and Casa Cornelia was born.

Casa Cornelia was named after SHCJ’s founder, Cornelia Connelly. The organization follows her directive to “[meet] the needs of the age with actions, not words.” Through Sister Ann’s leadership and the work of her dedicated staff, Casa Cornelia has been doing just that for the most poor and vulnerable in Southern California over the last 27 years.

Last year, the organization provided legal advice, representation, support, and referrals to individuals from 64 different countries, speaking 48 different languages, all desperately seeking a better life in the United States. Casa Cornelia’s clients are asylum seekers, victims of violent crimes (including domestic violence and human trafficking), and those affected by the family separation crisis, including many children.

In 2001 the organization made a commitment to represent every unaccompanied child detained by the government—a commitment it has upheld even as the number of children has grown significantly.

While the immigration crisis continues to worsen at the border, across the United States, and globally, the work of Casa Cornelia is more important—and more overwhelming—than ever. Casa Cornelia’s dedication to dealing with one person at a time keeps the organization continually moving forward. “We pursue justice with compassion,” Sister Ann says, “one case at a time.”

Faith has always been at the heart of Sister Ann’s work. She believes that, with the current political disharmony in our country, the immigration crisis requires a faith-based response.

“It’s a tough world requiring the belief that you just have to respond, to do what you can do, knowing that you’re engaged in this redemptive process of bringing life out of death and believing that Jesus continues to redeem the world and these suffering peoples,” she says.

Working with and advocating for defenseless individuals and families can be overwhelming and frustrating. But Sister Ann draws on her faith to find joy amid suffering. “You are enabling this person who has suffered so much to live a safe existence,” she says. “Whenever you can enable someone to live a little bit more fully, it’s a joyous experience.”

Sister Ann worked as a practicing attorney at Casa Cornelia for many years but has now stepped back into a more administrative and fund-raising role. When asked to reflect on the most and least enjoyable aspects of her work over the years, her answer is simple: “It’s not a dichotomy.” While there were certainly more unpleasant, laborious tasks, she says, “It would be wrong to separate the suffering from the joy. That misses the whole thing. It’s all one.”