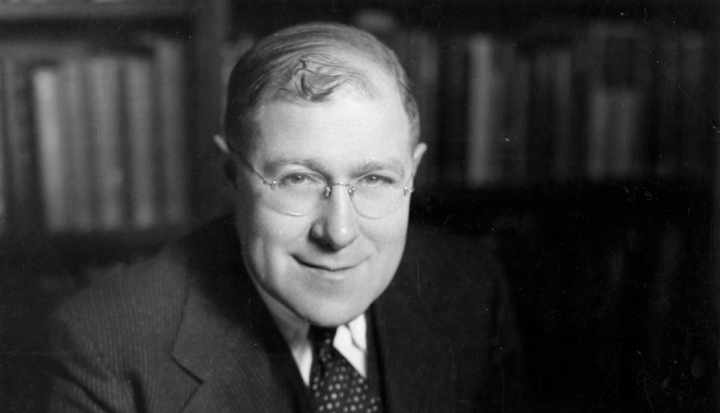 Like me, Jerome Kerwin (1896–1977) was a Catholic political theorist. He was the first Catholic appointed to the faculty at the University of Chicago. Despite his early life in Upstate New York, he became an icon of what I think of as Chicago’s own particular flavor of Catholicism. Kerwin’s work is scant even though he was a scholar. He spent many years working in university administration, not writing books.

But I have long been drawn to Kerwin for how he joined his understanding of our world through the lens of political theory together with political activism and the Catholic faith.

Chicago’s formidable Cardinal George Mundelein maintained a long grudge against the University of Chicago. The university originally had an affiliation with the Baptist church, although over time that gave way to a more secular, academic culture on campus. Both of those forces conspired to make the university, at least as far as Mundelein was concerned, a hostile environment for Catholics. Practically from the moment he arrived in Chicago in 1923, Kerwin began petitioning Mundelein for a Catholic chaplaincy on campus.

The answer was always no.

Kerwin was undeterred. In 1924 he began meeting with a group of students who read Commonweal magazine together as an informal ministry. The group came to be called “Dr. Kerwin’s Calvert Club” (adopting the name of George Calvert, who chartered the Maryland colony as a haven for Catholics in the 17th century).

Eventually it became Calvert House, the University of Chicago’s Catholic chaplaincy, when Cardinal Samuel Stritch (Mundelein’s successor) made it official in 1942.

In the political science department, Kerwin fell under the influence of Charles Merriam. Quickly, Merriam had Kerwin out of his faculty office to observe an election in Chicago’s First Ward. Kerwin wrote bemusedly about being “bodily ejected from one precinct because he objected to the use of the clerks’ table in lieu of the voting booth.” Kerwin would later found Chicago’s Fifth Ward Citizens’ Committee, an activist hub of independent political activity during the reign of Mayor Richard J. Daley.

Yet Kerwin’s real activism was as a Catholic layperson in the Archdiocese of Chicago.

In those years, Chicago was a remarkably forward-looking place that anticipated much of what the Second Vatican Council would call Catholics to recognize about the church, the world, and themselves. A generation of seminarians trained by Monsignor Reynold Hillenbrand brought the local church closer to conversations about racial justice, labor issues, community organizing, and peace.

Many of those men’s names are familiar: Dan Cantwell, Jack Egan, Andrew Greeley, George Higgins. They were joined and supported by laypeople who included Pat and Patty Crowley, Ed Marciniak, Eunice and Sargent Shriver, and Jerome Kerwin.

Kerwin was a founding member of the Catholic Interracial Council in Chicago during the 1940s. His most important contributions came in the late 1950s during a controversy about redevelopment in the University of Chicago’s Hyde Park neighborhood. Amid those events, Kerwin began to reflect publicly on what always (to me) was most interesting in his work and ideas: the role of the layperson.

The archdiocese opposed that redevelopment project, which prompted Kerwin to grow concerned that the church was “throwing its weight around” to get a political outcome. Kerwin believed that the institutional church should leave political activism to laypeople. The involvement of priests or bishops—the institutional church in any way—in political activism seemed dangerous to Kerwin, who complained in the Chicago Daily News that there was no “Catholic view” on the Hyde Park redevelopment, “just as there is no Protestant view or Jewish view.”

In a telegram to a member of the City Council, he wrote, “Many people of my own faith are greatly incensed over the attitude of the [archdiocese].”

What is important is that while Kerwin himself agreed with the position the archdiocese took on the redevelopment, he was simply uncomfortable that the archdiocese had a public position on a political issue at all.

Shortly after that controversy, and on the eve of the 1960 election that would send the first Catholic to the White House, Kerwin wrote two books—The Catholic Viewpoint on Church and State (Hanover House) and Politics, Government, Catholics (Dues Books)—that summarized his understanding of how the church should approach political questions.

He wrote about his great respect for members of the clergy, but also about how “their lives and past education have thrown them so completely and exclusively into the Catholic community that they do not know how the non-Catholic world moves or thinks.”

The “great role” of the clergy, he went on to say, is to provide “moral guidance” as laypeople sort through the “complicated social affairs of the present day.” But a Catholic “does not blindly follow the leadership of the clergy,” because, as Kerwin quoted Stritch, we live today in the “day of the layman.”

That really gets at what seems important to me about Kerwin and the sort of Catholic he tried to be in university life, in public life, and in the church.

Reflecting on the Second Vatican Council during his retirement in the early 1970s, Kerwin wrote that reform had been “too long neglected” and even if there were some enthusiastic excesses in the council’s implementation, “out of it will come a church renewed” where we will need to learn how to “depend more fully on a mature faith, not in any sense on a proud self-assurance, but on a faith seasoned by humility and sustained by God’s love and understanding for erring mortals.”

I was a faculty member working as a political theorist at a secular university for many years. I have labored to integrate my own Catholic faith with my vocation to academic life and my calling as a citizen, husband, and father. I work in Hyde Park just a few blocks from the University of Chicago and think often of Kerwin, especially now during these days of crisis in our church and nation.

In his time, Kerwin lamented “our misfortune that the idea of the church as ‘the milk-white hind immortal and unchanged’ has characterized official policies for too many recent generations.” He also worried at the “mischievous images of government as a mysterious and overpowering evil—an idea sedulously cultivated in American minds by people and groups who wish to lead their own lawless lives.”

Our crises might have seemed familiar to Kerwin. For the farsighted way he thought about them, I hope his example also points all of us toward solutions.

Image: Courtesy of the University of Chicago Photographic Archives