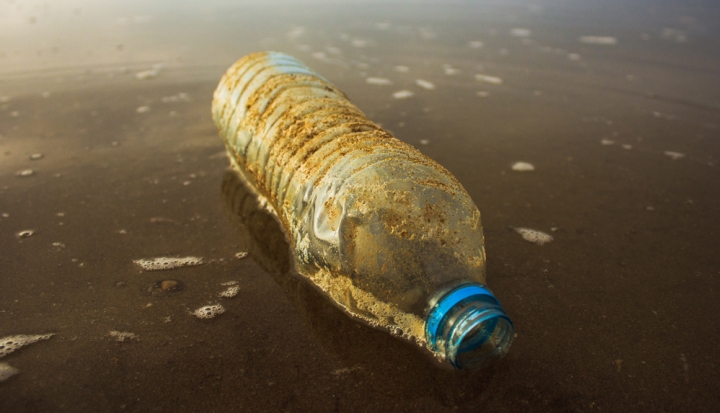 New surveys report that the Great Pacific Garbage Patch, mostly made up of plastic refuse from packaging and fishing, has reached 617,000 square miles, twice the size of the state of Texas, and is still growing.

Descending from this floating garbage dump—its smaller cousins adrift around the world—are microparticles of plastic, churned up as wave action degrades plastic bags and containers. Scientists have long recognized this micropollution as a nearly invisible hazard in ocean water that shows up in the aquatic food chain when small animals ingest the particles and get ingested themselves by larger sea life. Some of these, in turn, are swallowed up by the kind of ocean life that finds its way to your dinner table, where you get to have a bite of that micropollution, too.

But fish consumption is not humans’ only point of exposure to microplastic. Plastic particles are drifting in the air we breathe, turning up in our soil, and showing up in our water supplies.

Despite all the civic energy devoted to recycling, only 9 percent of the plastics produced over the last seven decades or so has been recycled. Worse, in an effort to cover up how poorly the developed world has handled its plastic problem, tons of the stuff is shipped overseas. But China, the Philippines, Malaysia, and other Asian nations, no longer content to be treated like the world’s trash heap, have begun turning back shipments of “recyclable” plastic.

Almost two thirds of all plastic refuse still ends up in landfills, where it will decompose over centuries, slowly leaching potentially toxic substances into the soil and water. Other microparticles come off synthetic clothing during washing and contaminate water systems, as do plastic “microbeads” used in cosmetics and cleaning supplies. Researchers in Germany warn that this terrestrial microplastic pollution is vastly greater in size than the marine variant.

The American Chemical Society reported in May that the average American consumes more than 70,000 plastic particles a year; bottled water drinkers much more than that. These microparticles can enter human tissue and trigger adverse immune reactions, throw off natural systems by mimicking hormones, and recombine into potentially cancer-causing toxins.

Getting this micropollution out of our food, soil, and waterways will be a macro project. The plastics industry could help by shifting to biodegradable plastics and designing plastic packaging that is easier to recycle. But the only sure way to reduce microparticle contamination is to cut off the flow at the source.

Consumers should take a long, hard look at the dreaded single-serve plastic, whether in the form of a water bottle, fruit cup, frozen food package, or the increasingly bemoaned supermarket grocery bag.

Around the world the thin plastic grocery bag has become the scapegoat for the wider problem of disposable plastic. But in analyzing the real-world impact of bans, researchers discovered that far from being a single-use product, supermarket bags are often redeployed by consumers as in-home trash receptacles. And when bans took effect, leaving shoppers bereft of the “single-use” checkout line bag, they substituted with purchases of heavier plastic garbage bags, contributing to a problem the bag ban was meant to address. Switching to paper actually created an even heavier production and disposal burden on the environment.

Policymakers and consumers engaged in a war on single-use plastics may wish to borrow some notions from the church’s just war teaching. Two ideas pertain: Does the proposed solution to a problem only lead to greater disorder, and is a possible fix proportionate to the threat? In serving the ecological common good, we don’t want to merely appear good, we want to produce civic policy that actually achieves some good­.