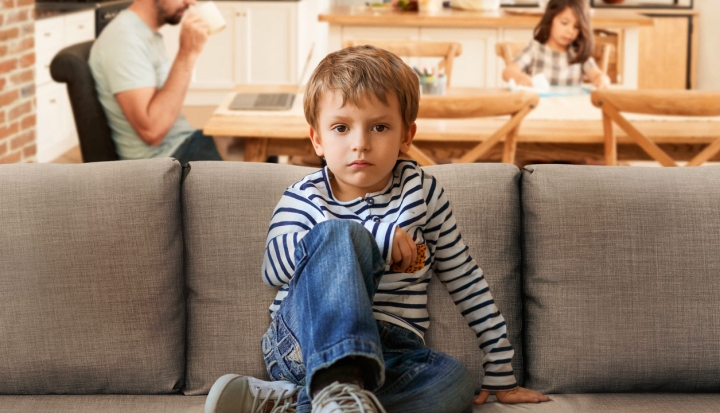 “Loving our own children is an exercise for the imagination,” writes Andrew Solomon, psychologist and author of Far From the Tree, a book recently adapted into a moving and challenging documentary.

“Though many of us take pride in how different we are from our parents,” Solomon explains, “we are endlessly sad at how different our children are from us.”

Solomon’s wisdom from the book carries into the film—a consideration of how several different families live with and love children who have been deemed different.

Solomon’s role in the film is occasional commentator and narrator, but his evolving story offers a through-line to the narrative.

Growing up, he was obsessed with the poetry of Emily Dickinson and refused to wear blue jeans. From an early age, he knew he was gay—and knew his parents were disappointed in him. His mother’s dismissal, in particular, wounded him. She wanted grandchildren, and his sexuality made that, in her eyes, an impossible dream.

Rather than remain angry, Solomon endeavored to understand why his parents acted that way. He reported and wrote his book in order to comprehend “how families go about dealing with children who are very different from them.”

“Different,” is, of course, a difficult word—but Far From the Tree respects its subjects enough to give them voices and to acknowledge that normalcy, however malleable a term, is a societal reality.

Put two people next to each other, and our eyes can’t help but juxtapose. We see height. We see weight. We see difference. Solomon suggests that to claim otherwise is to treat those with differences as mere children, incapable of hearing truth.

The film develops a handful of stories, each complex and endearing. The stories are woven into the broader narrative, but never become confusing or blurred.

Jason Kingsley lives in a house with Raymond and Yaniv. They call themselves the Three Musketeers, and they do everything together—eat dinner, go to parties, and have coffee on the deck. They also each have Down syndrome.

Jason has been in the public eye since birth. His parents were vocal and ardent advocates for him. They taught him to read, to speak multiple languages, and to even identify classical music pieces. He appeared often on Sesame Street, and seemed destined to culturally redefine what the Down syndrome diagnosis meant for young adults.

Yet in the film, his mother, in a moment of remarkable honesty, admits that she was frustrated by Jason’s development. He never reached the ambitious potential his parents created for him, and when his father died he went downhill.

It is a difficult admission to make. Jason seems happy, and he has worked delivering mail for a company for the past 18 years—but he also has difficulty distinguishing between reality and fantasy. He loves the film Frozen because he loves Elsa. He has a crush on her and while he knows she is a fictional character, he also longs to go to Norway to meet her.

Far From the Tree captures us in that moment—the paradox that Jason could be both perceptive and confused. In one scene his mother reiterates that Elsa is not real, just like Santa Claus—and Jason seems surprised. She worries what will happen to him when she dies. The camera doesn’t waver from the scene. Like Jason and his mother, we are meant to watch, listen, and wait. The film doesn’t lie to us: Nothing for these families is easy.

The Allnut family knows this all too well. Amy and Bob knew from an early age that their son Jack struggled to communicate. He would not respond to people speaking to him. Like Jason’s parents, they became frustrated.

Solomon’s observation about the importance of imagination when raising children is dramatized through the Allnut family: So much of parenting is the impossible task of thinking outside your own childhood. Jack’s parents are desperate to help him. They try Mozart therapy, allergy testing, a gluten-free diet, homeopathy, and a chiropractor, but nothing works.

Severely autistic, Jack would lash out and hit his mother. His family does not give up and discovers a clinic where a gifted counselor is able to connect with Jack. Soon he is able to express himself and his own frustrations. Far From the Tree reveals that difference goes two ways: Those deemed different are not to be silenced. They are to be heard and respected.

“How do we decide what to cure and what to celebrate?” Solomon wonders. By allowing subjects to narrate and show us their own lives, he and the filmmakers place that power where it belongs.

In one especially eye-opening sequence, the film examines the fallacy of the word cure. Joe Stramondo, a philosophy professor at San Diego State University, rejects the word during a meeting at the Little People of America conference. Joined by his wife Leah at the roundtable discussion, Joe narrates that “when you see people like me,” the expectation is that “the core experience is negative.” Whatever the intention of doctors, researchers, and commentators, they “see normality as the end goal.”

The true end goals for the subjects of this documentary—really, for all of us—are love, acceptance, and happiness. Solomon reconnects with his estranged father, going on walks with him and having long conversations. He is married, and has several children—his joy and appreciation are palpable. “I tend to find the ecstasy hidden in ordinary joys,” Solomon says, “because I did not expect those joys to be ordinary to me.”

Joe and Leah consider what ordinary and normal mean when they learn Leah is pregnant. After a few cautious ultrasounds, they tell Joe’s parents in a touching scene. The couple wonders aloud whether their child will have dwarfism or will it be of average size. Would they love the child differently?

In an interesting observation, Leah explains that a child of average size would be considered different—to them. That reorientation of perspective reminds the viewer to not confuse struggle with victimhood. Leah and Joe live full lives, and to imply otherwise is to reveal one curious result of what happens when we observe difference: The observers tend to make that difference about them.

That tendency is a curiosity of psychology, or perhaps our egos. It is true when viewers watch Far From the Tree, but it is especially true for the parents of children who experience differences—and the documentary deftly returns us to their emotions.

Solomon has written that “from the beginning [of our children’s lives], we tempt them into imitation of us and long for what may be life’s most profound compliment: their choosing to live according to our own system of values.” While a documentary shouldn’t be tasked with changing the world, Far From the Tree has the unique ability to make its viewers think more carefully about what it means to love and accept difference.

We ride along with the rising and falling emotions of these families, and while the film does offer a few pleasant surprises at the end, it’s true gift is authenticity. Difference, Far From the Tree argues, is a gift of life.