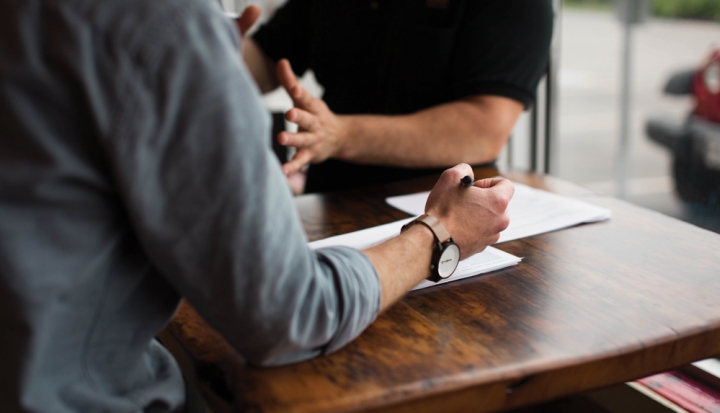 A few years ago, I applied for a job I really wanted. It was in a field in which I had years of experience and with an employer I liked. Plus I knew someone there, so I thought I had a good chance. I did a phone interview that I thought went well; then I waited to be invited for an in-person interview. And waited. Several weeks went by with no communication. Finally, I emailed my acquaintance, which produced no response. After a little while longer—several months after applying—I received an anonymous, automated email from the human resources department informing me that I would not advance in the hiring process.

It’s not an unfamiliar story, the unceremonious dismissal from consideration for a job, but I wasn’t applying for a position with a giant corporation. It was with a Catholic organization.

It’s common, particularly during the current abuse crisis, to hear demands for the church to be more transparent and apply best business practices to its administration. And while many practices certainly have much to recommend them, other common business practices—even widely accepted ones—leave something to be desired. One example: how many corporations, Catholic or otherwise, dismiss rejected job applicants.

Obviously, slighting job applicants pales beside most social justice transgressions, and it’s hardly the church’s biggest problem. But failure at such low-cost levels doesn’t bode well for weightier issues. As a Catholic school principal once told me, “We can’t have peace in our world if we don’t have peace on our playground.” I can’t say a company that treats its first-world job applicants with dignity won’t operate a third-world sweatshop, but is there any hope for those that ignore jobseekers’ dignity?

Maybe technology has taken away the human touch. When you submit an online application, the system typically generates an automated email to thank you for your interest.

Sometimes that acknowledgment consigns you to a form of limbo, saying you won’t hear back if you’re not selected for an interview. Other systems send an automated rejection email, one that most likely isn’t “from” anyone. Perhaps it contains an institutional signature line like “the HR team” but no named signatory or maybe it comes from an anonymous hr@catholicinstitution.org email address.

The argument is that organizations receive many more applications than they can individually respond to. However, the same technology that generates generic acknowledgments can also send emails that appear to come from a human with a name. The tool isn’t to blame; it’s operator choice.

Jesuit Father Thomas Massaro, professor of moral theology at Fordham, agrees that “rejected applicants deserve at least the courtesy of a signed response and a polite statement, even if standardized in format.” It’s an issue of human dignity, he adds, “which suggests that each person deserves to be respected as fully a person, not an impersonal file or applicant number.

It takes some effort to counteract the tendency of the internet and electronic interactions to reduce the job application process to impersonal mechanisms, but I would argue that it is worth the effort, and that there is a moral obligation to treat all applicants with respect.” An obligation one would think is further reinforced by the Golden Rule.

In fairness, people often receive better feedback after they make the first cut in the hiring process. And perfunctory job hunting results are certainly common in the secular world, but I expect less of nonreligious employers. They’re not burdened by obligatory social principles about respect for the dignity of all human persons.

Catholic organizations ought to be concerned about principles of human dignity, however, and their hiring process should reflect that. I understand if a job applicant doesn’t merit an interview or offer, but everyone deserves a human response to their application—one that doesn’t feel like the employer has washed its hands of you. Besides, when everything is marketing, it seems shortsighted to brush off people interested in one’s organization.

I don’t think employers intend to offend rejected applicants. They probably believe the generic email fulfills their obligation (and they’ll think I need thicker skin). It’s better than the kiss-off acknowledgment of “consider yourself rejected unless you hear from us again,” but such a response still doesn’t seem to recognize there’s a person at the receiving end—maybe because there isn’t really a person at the sending end.

This is not to argue that standard business practices have no place in Catholic organizations or that we shouldn’t improve church management and promote transparency. The church needs to do all those things. I can only say that I have experienced situations where accepted practice fell short of what Catholic teaching expects.

There are several relatively painless ways to inject more dignity into rejection. First, the contingent email is worse than a generic rejection. Employers should eliminate uncertainty and clearly notify applicants when they’re no longer under consideration.

And the message should be signed. Usually the content of rejection emails is fine, at least for a generic email—“regret,” “best fit,” “good luck” (you can only sugarcoat it so much)—but when it comes from no one, it feels hollow. A simple email over someone’s name doesn’t really require the “signer” to do anything. Even if there’s no true agency to the email, putting a name to it at least means someone has taken some ownership. It’s not much—and it doesn’t have to be—but it’s something.

Todd Darnold, an associate business professor at Creighton University, suggests the email should actually come from the department of the job posting. “That’s who the person applied to work for, not HR,” he says. “The rejection should come from the president or the hiring manager in the department. It shows more care for the person and is better branding for the organization.”

It’s probably too much to ask for a segmented rejection email, i.e., if an applicant merited a second look, perhaps their record could be coded for the system to add a fitting, if still generic, sentence. Again, a small thing, a modest personalization, but it’s a step away from discarding people who are more than their application.

It seems reasonable to expect Catholic organizations to treat rejected job applicants at least as well as they’d treat disgruntled customers—the applicant may not be mollified and there’s only so much the employer can do, but at least they will have done something more. As Cardinal James Hickey summarized Catholic social justice, we do it, “not because they’re Catholic, but because we’re Catholic.”

Fareed Zakaria, in a 2016 Washington Post column, suggested that American meritocracy has rewarded many people who in turn look down on those who haven’t succeeded—such as unsuccessful job applicants.

Not everyone wins, he notes, but “because [our country] is a meritocracy, it is easy to believe that that’s justified,” even if those who don’t win may “have been unlucky in some way.” Not in so many words, Zakaria ends with the Catholic social justice view: “More profoundly, [meritocracy] can be morally blind. Even those who score poorly on tests or have bad work habits are human beings deserving of attention and respect.” Even the attention and respect of a personalized rejection email.