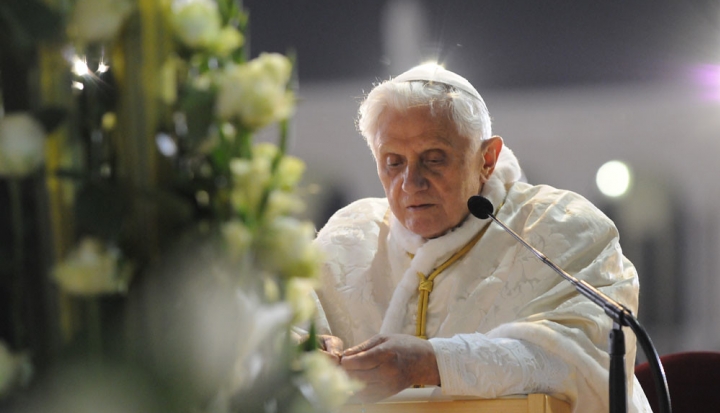 On the evening of April 10, Pope Emeritus Benedict XVI published a letter concerning the sexual abuse crisis facing the church. In it, he emphasized the presence of “homosexual cliques” in seminaries and what he sees as the acceptance of pedophilia in some corners. The emeritus pontiff also offers a very clear sense of the timeline of the problem, writing that, “The matter begins with the state-prescribed and supported introduction of children and youths into the nature of sexuality” during the late 1960s and early ’70s. Our problems, according to Benedict, began with the Sexual Revolution.

These are only some of the findings Alfred Kinsey made in his survey of thousands of Americans’ sexual behavior between 1947­ and 1953, more than a decade before the Sexual Revolution.

Kinsey’s work has been criticized on methodological grounds for decades, and some of that criticism is certainly justified: His work was groundbreaking, and some errors should be expected in a first-of-its-kind effort. However, there is no other study like it predating the Sexual Revolution, and Kinsey’s findings confirm what those who lived through the period say anecdotally: Promiscuous behavior and homosexual activity were less talked about in those days, but not much less common.

This is only part of the problem with Pope Emeritus Benedict’s assertions. His letter seems to be an effort to legitimize the narrative that progressive openness about sexuality among many Catholics after the Second Vatican Council created an environment where more gay men were attracted to the priesthood, they acted out sexually, and the sexual exploitation of minors was the result.

In the days after Pope Emeritus Benedict’s letter appeared, I interacted online with a scholar who asserted boldly that there was “a spike in Catholic clerical sexual abuse in the mid-20th century.”

That claim is common enough these days among those who agree with Pope Emeritus Benedict and who also are uncomfortable with Vatican II’s opening of the church to the world. Yet that claim is bedeviled by the same problem that haunts Benedict’s understanding of promiscuity.

There are no data on clerical sexual abuse before the mid-20th century. No one was studying it in those days. So, we cannot talk about a spike if we do not know what the baseline was for normal.

The problem here is the belief in a golden age, an ideal past to which the church only needs to return if we want to solve our most terrible problems. This is why both arguments ignore or simply make up facts. The lure of a golden age is powerful, and that is understandable. All of us in the church want to find the root of the problems so we can solve them, and even baseless arguments can seem tempting.

But these claims that we must return to the church’s former greatness before the 1960s are not being made in a vacuum. Within hours of Pope Benedict’s letter, headlines began to appear saying things like “Steve Bannon and U.S. Ultra-Conservatives Take Aim at Pope Francis.”

In recent weeks, Bannon has appeared on EWTN’s The World Over with Raymond Arroyo to speak against Pope Francis for criticizing nationalist movements while other media reports have told us that Bannon sees Francis as “the enemy” and that he has established a headquarters in Rome with the collaboration of American Cardinal Raymond Burke to train “modern gladiators” in a campaign to challenge the Francis pontificate.

This flurry of Bannon’s activities has not occurred in a vacuum, either. Philadelphia’s Archbishop Charles J. Chaput published a more than 1,200-word essay in First Things supporting Pope Emeritus Benedict’s letter mere hours after it appeared—an impressive feat for a busy metropolitan archbishop, considering the emeritus pontiff’s letter was originally published in German for a small Bavarian paper. Of course, English-language translations of Benedict’s letter were pre-circulated to the National Catholic Register and the Catholic News Agency with no explanation for why other English-language Catholic media organizations, such as America, the National Catholic Reporter, and U.S. Catholic, were not selected to receive advance copies.

If all of this has the appearance of a coordinated campaign to attack Pope Francis, that is probably a fair conclusion. It seems unlikely that the nonagenarian former pope is coordinating this campaign. It is more likely that he is being used to advance it, and there has been some rather reasonable speculation that the letter was ghost-written for him (a practice that should not raise eyebrows, as bishops write very few documents for themselves).

Pope Emeritus Benedict is not innocent of what is happening, but our attention is better focused elsewhere on more active combatants in this assault on Francis’ leadership. Darker forces are at work here. They have an agenda that goes far beyond the debate about sexual abuse or leadership in the church, and they are not above weaponizing the sexual abuse of children to press their cause. That is where attention needs to be paid. But there is something else.

Early Christians struggled against gnostic movements. Gnosticism refers to the idea of a special knowledge available only to a few—“Trust me, I know the secret,” says the gnostic. An ideal past, a greatness in the church (or in the United States) that we can return to, is a gnostic idea. It offers a formula to follow that will create a world in which our problems are solved.

Gnosticism has never gone away. It arises from our frustration that Christians and our church are sinful, and we go on being sinful. The mysteries of sin and suffering are too much for us sometimes. We want a perfection that is not available in this life, and we are unwilling to wait for the reign of God to get it. So we manufacture a formula that will fix things.

Our faith teaches us to embrace the mystery of God’s patient plan for salvation, but the gnostic certainty that we can have something better now too often overtakes us. It is overtaking us now.

Gnosticism is winning today in our world and in our church. We must recognize that is what is happening if we hope to respond to it effectively.