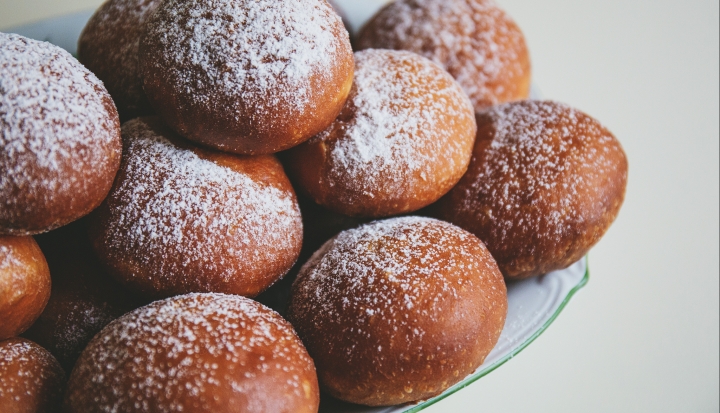 The coming of Lent conjures a complicated set of awakenings in my consciousness that rivals the coming of spring itself. Almost all of them involve food.

Our family begins Lent before Ash Wednesday with a sort of Polish Mardi Gras: Pączki Day. Pączki are balls of risen dough, deep-fried in lard (yes, lard) and filled with jelly or cream very much like a Bismarck. They more than put the “fat” into Fat Tuesday.

When I married into an Italian family, I discovered the pizzagaina that ends the Lenten season. Pizzagaina is a pie filled with cheeses and salty meats baked into a crust (along with a clipping of a palm from Palm Sunday for good measure). It demands a lengthy preparation that consumes much of Triduum. We eat it after returning home from the Easter Vigil, a slice of pizzagaina with a glass of red wine. The experience gives flesh to the spirit of Easter joy.

In our house these foods are as much a part of the rituals of Lent and Easter as ashes and holy water. I have made my Polish grandmother’s pączki recipe several times, though mostly these days I buy them at a bakery. Much like the rituals that surround the pizzagaina (and other foods I haven’t even mentioned), whether we make it ourselves or buy it at the store we know that we and our children are doing what our parents and grandparents did. As much as any dogma of the faith, this is who we are as Catholics. We are a community spread across time, joined to one another by memory and ritual with the certainty that a greater, transcendent identity holds all of us together despite our differences of culture, circumstance, or language.

We live in a time now that can seem bewildering for the changes and diversity all around us. New groups of immigrants have joined our American family, Spanish and other languages are spoken more and more commonly in every corner of American life, and all of that comes in addition to the sudden shifts in our consciousness brought about by #BlackLivesMatter and #MeToo. Many of our old cultural certainties have been upended.

In the long life of the church there have been even more remarkable changes. The Jesus movement began among Jews in the first century. Three hundred years later Christianity was adopted by Romans who, as the Empire dissolved, welcomed Germanic peoples from the north into the Christian family. The church spread across and dominated the imagination of the known world even as the church was experienced differently in different places. Sometimes the differences became overwhelming. Eventually there would be schism and then Reformation: Christianity divided first between West and East then the West within itself. Yet still today, even only within the orbit of the Roman Catholic Church, there are 23 particular churches in communion with the more familiar Latin Rite that most American Catholics recognize. There are so many ways to be a Christian. There even are two dozen ways to be Catholic. And, if we think about the many different ethnic expressions of Catholicism, there are even more. Change and diversity are the Christian story.

Our journey from ashes through penance to Good Friday and Easter Sunday is a journey that tells us how change is necessary along the road of reconciliation, and it also is about how no one is excluded from God’s loving mercy. As Genesis tells the story of our common creation, Easter Sunday is a story of our common re-creation and the invitation to friendship that God extends to every person, excluding no one. Lent prepares us for transformation, and we reenact that transformation every year as our parents and grandparents did. It reminds us of how we should be living in the world and what we are living in the world for.

As Christians, we are called to live confidently in our faith, contrary to the way the world tells us to live and the things the world values. Maybe that is easier to do when we think only about the fairly abstract topic of eternal life. It is more difficult amid the tumultuous changes of a diverse world. But it is no less important in one case than in the other.

The pączki and pizzagaina that will come to our family table are two more reminders of this fundamental fact of Christian life. In my imagination, they have a sacramental flavor that joins the sweet and salty. But in an even more tangible way, they reflect how the children of Italians who made pizzagaina have married the children of Poles who made pączki, making our family possible. It was an outcome our ancestors would not have predicted, and they might well have been as frightened by it as many people are frightened today by diversity and change. It wasn’t anything our ancestors planned. Our faith is here to help us appreciate how it was a part of God’s plan.

And, because we are Catholic, even during Lent those reminders can come as delicious food and drink. Taste and see that the Lord is good.