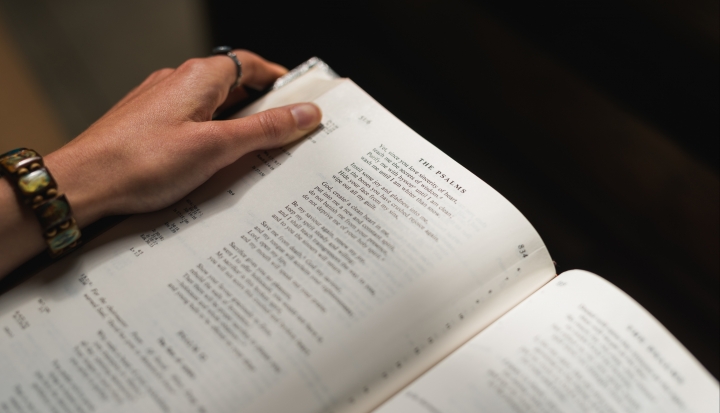 Rarely is there only one way to do something. When it comes to exploring scripture, resist Bible fascists who insist their way is correct. Your best approach is influenced by a lot of factors, including context, time, and personality. Are you engaging this project alone or in a study group? Are you committed across a lifetime or compressing your effort into a single semester? Are you fierce about your goals, or do you tend to quit at the first obstacle?

As a young adult, I read the Bible cover to cover. This kamikaze method is generally discouraged: Many people get bogged down in the third book, Leviticus, and never recover. Since I’m into the completion thing, Leviticus wasn’t going to defeat me! I limited my study to three chapters a day, including all footnotes—those really helped. It took two years to reach Revelations 22, and while I’ve never done the Genesis-to-Revelation route again, I’ve also never stopped reading the Bible by other means. The only troublesome result I faced is awakening a desire to go to seminary and study scripture in more depth.

Some books—like Genesis, Exodus, and the four gospels—are more familiar, involve more storytelling, and seem more accessible. That’s why some experts recommend taking up those first or reading them interspersed with tougher texts like prophecy and the letters of Paul. If you prefer a little reward after hard effort, this might be a more helpful organization.

Reading the Bible “out of order” won’t confuse the sacred story. This can’t happen, since the present ordering is not the way it was written. These 73 books first appeared in isolated collections and were eventually stitched together in various ways.

For example, the Jewish Bible contains most (but not all) of our Old Testament, but is not organized the same. And while Genesis begins with the creation myth and Revelation concerns endings, some texts in-between exist in no particular time—like Proverbs, Song of Songs, Job, Esther, or Joel. Early prophetic passages were composed before Genesis. The Gospel of Mark was written before Matthew, which appears first in the New Testament. So don’t worry excessively about maintaining an established order.

Our lectionary—the readings we hear at Mass—seeks to pair Old Testament “promises” with New Testament “fulfillments,” or ancient stories with related events in the generation of Jesus. (The Second Reading follows other texts from start to finish and is only coincidentally related.) Some scripture study groups prefer this approach. The downside of lectionary-based study is that a great portion of the Bible isn’t read on Sundays, and passages out of context miss a lot of good stuff that would give rise to other meanings and insights. The only necessary ingredients to reading the Bible? Do it prayerfully, carefully, and with an open heart.