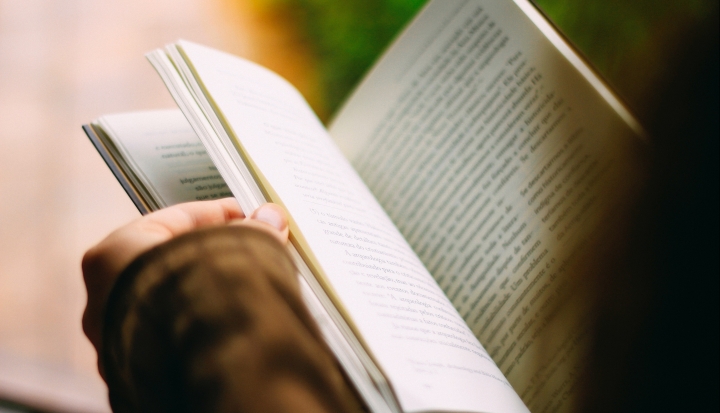 I sometimes picture myself in a nursing home where my family and friends complain about having to empty my pockets of notes, reminders, and quotes stashed here and there lest I forget good advice. They’ll also have to manage an avalanche of prayer books, anthologies, and texts on my bedside stand, never shelved just in case I need to find, in a weak moment, a favorite passage, part, or prayer.

Even now I have a pile of texts at the ready for my morning prayers. I open one randomly, Awareness by Father Anthony de Mello, if that is even possible given how many corners have been turned down, the gutter binding broken and creased, words underlined, and margins annotated. But there is that passage again, in a chapter titled “Permanent Worth”: “Painful experiences lead to growth. . . . Suffering points up an area in you where you have not yet grown, where you need to grow and be transformed and change.”

I read the words, knowing I’ve read them before but marveling at how their simple wisdom stops me every time. I sit with the passage. I pray. I contemplate by connecting this insight to my life, remarkably in a different way than l did the last time. Then I have that urge to write the passage down on a slip of paper so I can carry it in my pocket always, like a four-leaf clover or a religious medal. That way I’ll have those words at the moment when the pain returns.

Books have always offered solace, comfort, companionship, escape, insight, and challenge. So when almost 10 years ago I learned in a spiritual retreat that reading can be prayer I was hooked. Ever since discovering lectio divina I’ve been on a path of faith reversion, one page at a time.

As a monastic practice lectio divina was first established by St. Benedict in the sixth century and formalized by the Carthusians in the 12th. It involves four steps: lectio (read), meditatio (meditate), oratio (pray), and contemplatio (contemplate). In the 20th century, the Second Vatican Council recommended lectio divina to the general public. Later, Pope Benedict XVI affirmed its importance: “As a strong point of biblical ministry, lectio divina should therefore be increasingly encouraged, also through the use of new methods, carefully thought through and in step with the times.  It should never be forgotten that the Word of God is a lamp for our feet and a light for our path.”

For me “in step with the times” means carving rare moments for deep reading out of a daily routine endlessly interrupted with the urge to check cell phone alerts or catch up on newsfeed updates. Sometimes during my morning prayers or my weekly hour in eucharistic adoration, I open the Bible randomly and read a few passages, letting the Holy Spirit decide what I need to contemplate.

However, I am more inclined to choose my lectio from the seemingly inexhaustible lexicon offered by great Catholic intellects, saints, and spiritual guides. For example, I keep Awareness by de Mello, a Jesuit priest/clinical psychologist/Eastern mystic/persona non grata with the Curia, always close at hand. It is a paperback alternatively in my briefcase, my prayer satchel, my bedside, my car. It was first suggested to me by a friend as I struggled through the painful end of a 24-year marriage.

I will admit that there are some texts I struggle to appreciate and understand, but I never abandon them completely. During my first read of The Story of a Soul by St. Thérèse of Lisieux, I found her daily mortifications trite and frankly a little pathetic. But during a time of personal crisis I stumbled upon this passage while practicing lectio divina in eucharistic adoration:

One Sunday, looking at a picture of Our Lord on the Cross, I was struck by the blood flowing from one of his divine hands. I felt a pang of great sorrow when thinking this book was falling on the ground without anyone’s hastening to gather it up. . . . I shall spend my life gathering it up for the good of souls. To live from love is to dry Your Face.

At the time I had been attending daily Mass at church near my office just to get through the day. I suddenly recalled the mural behind the altar: angels collecting the blood of Christ in shells as it flowed from his body to the base of the crucifix. That insight, that making the passage my own, assured me that Christ would give me the strength to press on. During my morning prayers I now ask St. Thérèse to help me accept the suffering that is sure to come each day. Somehow anticipating trials then offering them back to Christ for the sake of other suffering souls helps me to detach.

Perhaps most unconventional in my lectio divina practice, however, is my reading of decidedly secular texts—fiction, journalism, and essays. I delight in finding faith revealed obliquely but often no less powerfully. I think my faith is strongest when my intellect is challenged to find the divine in the misfit characters and shockingly gothic endings of O’Connor short stories, the unvarnished and scolding calls to action in Catholic Worker newspaper columns of Dorothy Day, and, yes, I can even see the Beatitudes in Jack Kerouac’s Beat Generation tales of the road.

Though I rarely have the time to use the traditional Benedictine approach of reading the passage slowly four times, each time with a slightly different focus, I do try to avoid assigning a meaning to it at first. I wait for the action of the Holy Spirit to illuminate my mind as I ponder the passage.

The meditation stage tends to follow naturally my initial read of a passage as I “hold the passage lightly,” neither analyzing it deeply nor emptying my mind completely but something in between. I like that Benedictine meditation differs from that of Eastern religions in that it aims to stimulate thoughts rather than to banish them and sees deep understanding as a way to heighten a personal relationship with God.

When it comes to the oratio, I appreciate St. Ambrose’s definition of prayer: “Prayer should accompany the reading of Sacred Scripture, so that God and man may talk together; for ‘we speak to Him when we pray; we hear Him when we read the divine saying.’ ” I take his advice, talking directly to God with a prayer of thanksgiving that goes something like, “Thank you for drawing close to me. I can’t believe you’ve once again guided me to what I need when I need it. You’ve answered my prayers with these words.”

In my practice contemplation means making the passage my own by writing about it in the margins, in my prayer journal, or in an essay like this one. I agree with my favorite Catholic writer, Flannery O’Connor, who said, “I write because I don’t know what I think until I read what I say.” I don’t really understand a text until I digest it with my pen. I appreciate how Benedictine Father Gervase Holdaway in The Oblate Life likens lectio divina to “feasting” on texts, first taking a bite of a small passage, chewing on it, savoring its essence, and, finally, making it a part of the body and mind.

Lectio divina teaches that not only can a text become part of us, any experience in our daily lives might reveal the voice of God if we just learn to listen. So I hope that by the time I end up in that nursing home my heart will have incorporated the rhythms of the four steps so well I will recognize the sacred in each moment. Then I won’t need those slips of papers or Post-it notes in books by my bedside. As Christine Valters Paintner observes, “As we practice lectio divina . . . we no longer worry about whether we get the steps right. We surrender ourselves into the natural grace and rhythm of our heart’s deepest longings.” USC