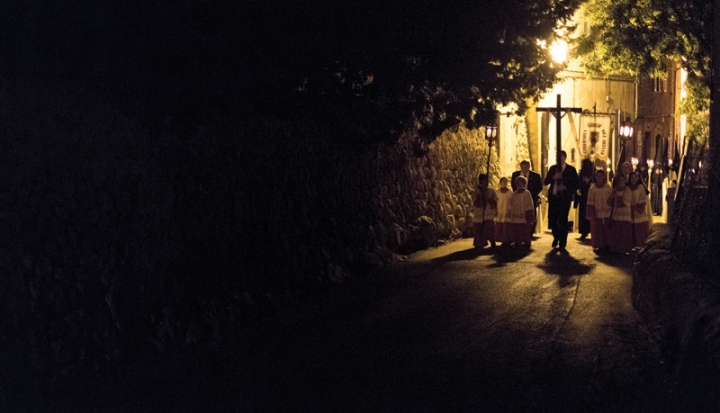 I grew up in a Catholic incubator, so to speak. I spent my entire childhood and early adolescent years living in Colombia, South America, where more than 90 percent of the population self-identify as Roman Catholic. Being something different than Catholic was not necessarily an option.

We breathed Catholicism at home and in our neighborhood. Images of the Virgin Mary, the Sacred Heart, and the saints filled the walls and empty spaces of the house where my family and I lived. My mother claimed a special corner for an altarcito (small altar). It was her sacred space. No one dared to mess with it. There was no negotiation about going to Mass on Sunday or receiving the sacraments. That is what we did as a Catholic family. Period.

All the children in my neighborhood knew the name of our Catholic parish—the only church in the barrio. We knew the names of the priests serving there, and we also knew who had not received their First Communion. Participating in church celebrations and events was expected. I took religion classes in public high school, three times a week. My religion teacher was a former priest, Ismael, who taught his young students to read the Bible with a critical mind and introduced us to the beauty of Catholic social teaching. As I think about it, he planted important seeds that flourished later on during my discernment about becoming a theologian. All in a public school.

Like me, millions of immigrants from Latin America grew up in towns, neighborhoods, and homes that were Catholic incubators. About 20 million immigrants from Latin America and the Spanish-speaking Caribbean live today in the United States. The vast majority self-identify as Roman Catholic. In most parts of Latin America, Catholicism still shapes most of people’s daily lives. Values and ways of being, privately and publically, exude Catholicism. Constant references to God’s divine providence and the love for the Virgin Mary permeate language. Many Catholic immigrants from Africa, Asia, Europe, and other parts of the world grew up in similar contexts and now live in the United States.

Hispanic Catholics, immigrant and U.S. born, are raising our children and grandchildren while drawing from what we learned and experienced in the Catholic incubators in which we grew up. Most of the time we share our faith with Euro‑American, white Catholics who have some memory of living and practicing their faith in similar circumstances. Older Euro-American Catholics remember, about half a century ago, growing up in Catholic enclaves located in large cities throughout the country, mostly the Northeast and the Midwest. People there knew they were Catholic because they spoke the same code language (i.e., Catholic jargon), understood the religious rituals that brought them together regularly, shared their profound admiration for Catholic leaders, and took Catholicism for granted. These enclaves were their own Catholic incubators.

In the late 1950s, sociologist Allen Spitzer used the term “cultural Catholicism” in reference to the national, aesthetic, social, and cultural dynamics that together allow many Catholics to share our faith without much effort, intentionally or unintentionally. Cultural Catholicism provides the conditions for this to happen. People are born into a Catholic realm. They breathe Catholicism. They see the world through Catholic lenses. By the time they acquire some religious consciousness, they already understand themselves and act as nothing else but Catholics.

But the constitutional separation of church and state, shaping the ethos of this nation from its very beginning, has given birth to dynamics that make the idea of cultural Catholicism quite difficult. Besides the obvious political and legal limitations, many people interpret “separation of church and state” as “separation of faith and life,” somehow assuming that what happens in church stays in church—or home or in one’s conscience. Being religious, something usually relegated to the realm of the private, does not always have to match our being in public. The more comfortable we become with this arrangement the less relevant religion becomes, thus weakening the social dimensions of our Christian identity.

In the midst of these circumstances, arguing in favor of Catholicism demands more academic and clear articulations of our faith as well as a stronger level of intentionality in naming what we believe. Such exercise often leads to overemphasizing concepts that embody our faith and their accompanying explanations, sometimes at the expense of practices, devotions, and aesthetic expressions. Doing so also requires some level of educational sophistication that can only be sustained with good catechesis. Many U.S. Catholics, especially those with higher levels of education, are already familiar with this way of engaging their faith.

But millions of Catholic immigrants from Latin America and the Spanish-speaking Caribbean, as well as Catholics from other parts of the world, come from contexts where Catholicism is rather caught, lived, and breathed more than argued, explained, and defended. I am one of them. We benefited from a Catholicism that is unapologetically public and dynamically communal rather than one driven by individual choice and often relegated to the realm of the private.

We are witnessing the encounter of a large body of Christians shaped by cultural Catholicism with another that exhibits the main characteristics of nominal Catholicism (i.e., emphasis on membership, as indicated earlier). Of course, this encounter did not start yesterday. We have been engaged in it for centuries, although with the growing number of immigrant Catholics in recent decades it has become more evident now. These two ways of being Catholic are not mutually opposite. On the contrary, they complement one another in many ways. Both have much to teach one another, and both must find a home in our faith communities.

Catholics who became conscious of our faith in “Catholic incubators” or the realm of cultural Catholicism find ourselves challenged within a society like the United States where Catholics are neither the majority of the population nor have the support of social structures to pass on the faith. We cannot take Catholicism for granted.

Cultural Catholicism is a powerful starting point, yet we must be more intentional in naming what we believe and explaining why we believe it, especially when passing on the faith to our U.S.-born children and grandchildren. Hence there is the need for better quality catechesis and evangelization efforts in our faith communities and families. Our cultural Catholicism is a major asset, without a doubt. Our practices, our expressions, and our ways of life must be cultivated and retained as much as possible because they excel in bridging faith and life, the public and the private. This is our contribution to the renewed U.S. Catholic experience being forged in the 21st century.

Catholics who grew up in the United States and are more at home in a culture that demands arguing persuasively about one’s religious values have a double challenge. On the one hand, they must strengthen their commitment to sound catechesis and evangelization, making sure that the Catholic faith is not merely reduced to concepts and rules devoid of devotional practices and expressions that permeate every aspect of their daily lives, privately and publically. On the other hand, they have to embrace the next generation of Catholics, constituted largely by immigrants and their children and grandchildren, and their ways of being Catholic as a gift. This means avoiding the temptation to assume that a rational discourse about the faith is “better” or “more theological” than a popular practice.

It is not about whether a theological argument is better than a devotion, or otherwise. It is about recognizing the need for both to have a fuller picture of what we can be as U.S. Catholics in the rest of this century.

Hosffman Ospino is professor of pastoral theology and religious education and the director of graduate programs in Hispanic Ministry at the School of Theology and Ministry at Boston College.