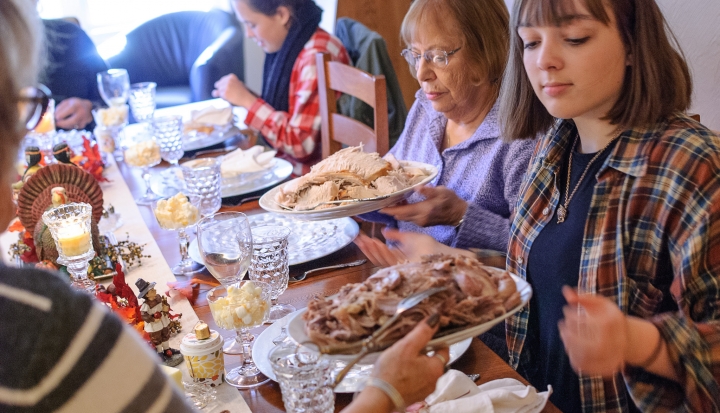 “Show, don’t tell” is one big commandment of writing. Telling is super boring: “The left fielder had a strong arm.” You want a writer to show you the scene: “As 31,942 fans watched in disbelief, Oakland A’s outfielder Yoenis Céspedes hurled the ball 300 feet from the left field corner of Angel Stadium and cut down the Angels’ Howie Kendrick as he streaked for home.”

As moms and dads handing on the faith to our kids, we learn by experience that we have to both show and tell. If we slouch along with a “Do as I say, not as I do” approach, kids see right through that (“Dad, if you’re telling me not to yell, then why are you yelling at me?”). Just as we show them how to swing a bat and throw a ball, we have to show kids what a Catholic grownup looks like in action.

But neither can we be mute. Kids need us to tell them what we believe, why we pray, how God makes a difference in our lives. Studies show that our example and our words are the single biggest influence on kids’ faith lives—not only in their early years, but lasting into their teens and young adulthood.

Catholicism is easier to pass along than we might think, because it has never been a dreary set of rules. Rather, it’s an encounter with a living person: Jesus Christ, who said, “I am with you always.” That means he’s still in our world, still making things happen. (Try asking your kids, “Where did you see Jesus in action today?”) As the church—the people of God—we seek to be the hands and feet of Christ in the world. This gives our kids a vital mission and holds up virtues they can aspire to even at a young age: selflessness, courage, steadfastness, sacrifice.

Young people crave authenticity: Each Sunday they can listen to stories of Jesus, who was the most authentic human ever while also being the son of God—a great mystery for kids to ponder.

A 40-something friend of mine told me that he loved growing up Catholic because it is “beautiful and fun.” Right he is. Catholicism has always offered a feast for the senses, perfect for kids: We splash water at Easter, we light candles, we fill up the church with the sweet smell of incense. We crown Mary with flowers; we take our children’s tiny hands, dip them into holy water, and teach them to make the sign of the cross on their head and shoulders. We even have colors—purple, red, green—for difference seasons.

We celebrate feast days and the saints with their wild, adventurous stories. We hold hands as we teach our little ones to prayer the Lord’s Prayer, and to thank God for the food on our kitchen table at home. We sing songs together. We bless our children as they go to bed. We tell stories of David and Goliath, Daniel in the lion’s den, Mary and the angel, 12-year-old Jesus in the Temple. Beautiful? Fun? You bet.

We also relish the courageous part of Catholicism, where a dad tells his children how, as a kid, he helped a boy being bullied in class and walked him home while other kids threw rocks at them; he hopes his kids will get the message. We bring our kids to the immigration march, the anti-death penalty rally, the pro-life day, the homeless shelter, the food pantry.

We tell kids why Catholics do the works of mercy, why the church stands for social justice, for the poor, the immigrant, the defenseless. We tell them God expects great things from them in helping to make the world a better place.

Show and tell—thank goodness for kindergarten, where we learned this and everything else we absolutely needed to know.

This article was originally published in the September 2014 issue of At Home with our Faith.