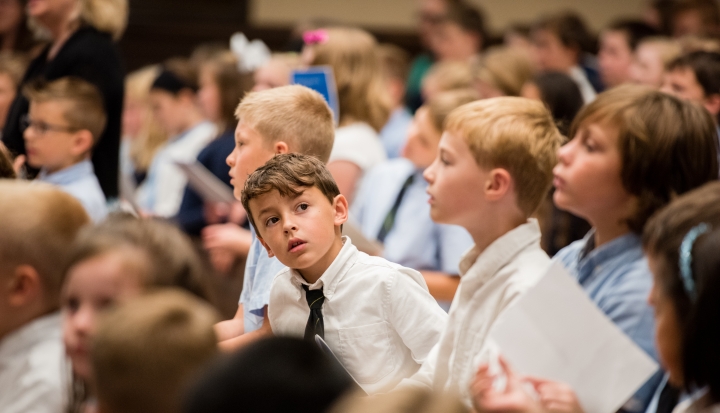 As a child I attended a K–8 Catholic school and went to church with my family every Sunday. For me, Mass was a thing to get through so that we could go home and have donuts for breakfast, what I thought of as the reward for going to church.

My brain rarely connected with what I heard from the altar. Most weeks, as I sat in the pew, my mind wandered, and I played mental games to pass the time, such as discovering how many of the alphabet’s letters were in that week’s bulletin. (If it was all 26, I won.)

When I was old enough, I became an altar server and played music with a recorder choir at Mass, because those activities gave me something to do, a new perspective from which to observe the up-and-down the aisle proceedings of the ushers, the laypeople, the communion-receivers.

By high school I was allowed to go to Mass on my own. I got caught once or twice not showing up when I had told my parents I would, but getting in trouble didn’t make me want to go more. Once I had the freedom to pull away from weekly Mass, I did. I just didn’t want to go.

As a student at Georgetown University, my ears perked up for the first time in a long time at church. It felt like the Jesuits were speaking to us as young people, as real people, as smart people—it also helped that while at school I studied “The Problem of God” with Father Thomas King, which made my brain ache, so Mass felt like a lighter, chattier version of that.

I didn’t attend Mass regularly after college, aside from Christmas with my family; although we dipped back into religion when my husband and I had a Catholic wedding. Once we said our vows, we went back to our lazy Sundays—until I discovered that church provided a respite for me as a new mother.

I felt a sense of needed rest, calm, and simple familiarity on dark Saturday nights when my husband and I wheeled our stroller to St. Ita’s in Chicago. Mass was a place to go and just sit, and my infant son had plenty to look at between the different faces and the beautiful stained glass. I felt connected to a community and loved showing off my baby to the approving congregants. But after a while I stopped going again, lulled into the easy routine of quiet Sunday mornings, a rare day we didn’t have to be somewhere such as school, day care, work, or lessons.

I have now landed somewhere in between Mass and no Mass as an adult and as a mother. My own family and I belong to the same parish I went to as a child, but we don’t go to Mass every Sunday or even most Sundays. While we try to go to enough church events that people don’t wonder who we are, I don’t prioritize it the same way that my father did: to get the whole family up and dressed and out of the house and well-behaved at the same time every week.

However, we do send our sons to Catholic school—the same one that I attended. So as part of their education, my boys learn about religion and attend Mass a few times a month. I am, in fact, pleasantly surprised when I attend Mass with them and see how well they behave (thanks in part to quiet chewy snacks).

My father got something from Mass that I do not, and I don’t begrudge his desire to have me be a part of that as a child. While there are many things I put my sons through that I went through in the spirit of tradition and continuity (same town, same school, same parish, same donut place), I don’t make my sons go to Mass every week. I wouldn’t have a good answer if they asked me why we go to church every week aside from “It’s what we do” or “It’s what I used to do.”

I joke that we pay good money to outsource religion to our kids. Is this wrong? It feels wrong somehow, yet it is right enough that it’s how we choose to operate, happily. But this choice makes it tricky for me to answer the question, “Should you force your children to go to Mass?” The easy answer is no, in that we don’t force our children to go to Mass very much with us. But we do indirectly force them to go with their classmates and teachers. I am not sure what that makes me—certainly not the world’s greatest Catholic or the world’s most righteous mother.

I feel increasingly fine, though, owning my role as Not Great Catholic or OK Mom.

While writing this piece, fresh details arose about the levels to which the Catholic Church has systematically covered up the abuse of children. Children like I used to be. Children like mine.

Suddenly I don’t feel so compelled to defend my choices about how much Mass my children need to attend and how we execute that decision. I don’t think this is a time Catholics can criticize other Catholic parents for how little or how much church is in their children’s lives. Faith, for me, right now, is finding a reason to believe that there are good aspects to getting my children involved with this particular institution—not a tally of how often one might find all four members of my family in one pew.

I continue to love my sons’ Catholic school. I love the Catholic values my sons receive daily. I will continue to attend Mass with them at school and on larger family occasions. We keep faith and tradition and values, but we also keep some distance.

Instead of feeling remorseful right now, I feel that the church is lucky to have my children at all.

Claire Zulkey is a journalist and the author of two books for young people, An Off Year and Best Frenemies. Much more about her and her work can be found online at Zulkey.com. She lives in Evanston, Illinois.