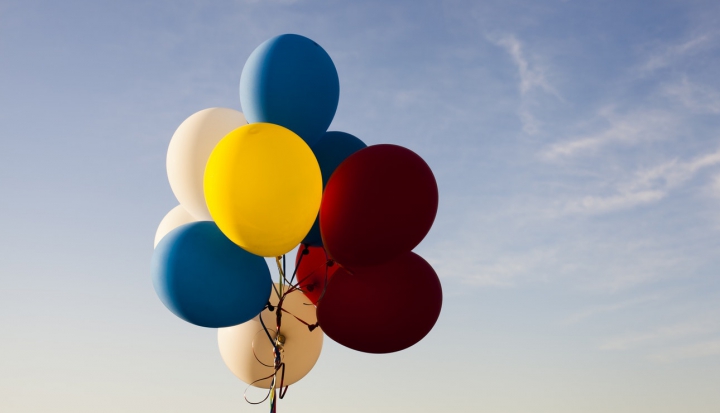 In October, around 150 students gathered in the parking lot of Wyoming Area Catholic School to watch a giant rosary float heavenward, carrying their prayers along with it.

The giant rosary, made from more than 50 helium-filled balloons, is an annual schoolwide tradition at the Catholic school in Exeter, Pennsylvania and is led by the 8th-grade class. Eileen Rishcoff, principal, started the tradition when she came to the school five years ago.

“It turns to be a lovely visual for all of the students,” Rishcoff says. “It’s something that every grade level can relate to, and it’s become quite a lovely tradition for the 8th grade to prepare the rosary for this given day.”

A local businessman helps by inflating and stringing together the balloons for the ceremony, which coincides with the Feast of Our Lady of the Rosary. Ann Marie Walsh, the 8th-grade teacher, says this year’s class of 21 students was busy: Everyone had a job in the project. They lead the school in various prayers. They recite the rosary. They release the rosary at the right time.

“It makes them take ownership of the activity, she says. “They’re just not bystanders. They’re taking an active role in what they’re doing.”

Melanie Moran, a 7th-grade student, says the tradition is a special part of the students’ Catholic faith and a way to teach the younger students.

“I think it’s important that we do this because it helps the little kids understand more,” Moran says. “Because the older kids are doing it and praying, they’ll want to be like us.”

Having the younger students pray the rosary along with the older ones is a beautiful reminder of the power of prayer, Rishcoff says. The visual of the giant balloons keeps the students engaged in a practice on which it can be difficult for children to concentrate.

The 8th-grade class practiced letting go of the balloon rosary in stages so that the string does not get tangled. The cross either has to be let go first or last. While the class releases the balloons, the school choir performs, Rishcoff says.

Hayden Foland, an 8th-grade student, says he was praying for his great-grandmother during the ceremony this year. She lives in Indiana, so his family is unable to visit her often.

Venecio Carpentier, a 7th-grade student, says when the school first started the balloon rosary project he was very young and did not know what the rosary was. To be able to lead the program next year as an 8th-grader will be cool, he says.

“I see now that the rosary as something special,” Carpentier says. “It relates to our faith in way that I think nothing else could.”

Rishcoff says the annual tradition is a way for students to return to the basics of prayer and the beauty of the rosary, especially in a society full of distractions.

“I want to get back to a little bit of the old school,” she says. “With technology and everything that it is, I just wanted the children to learn to love to pray the rosary. I wanted them to see it in a different way and spark some new interest.”