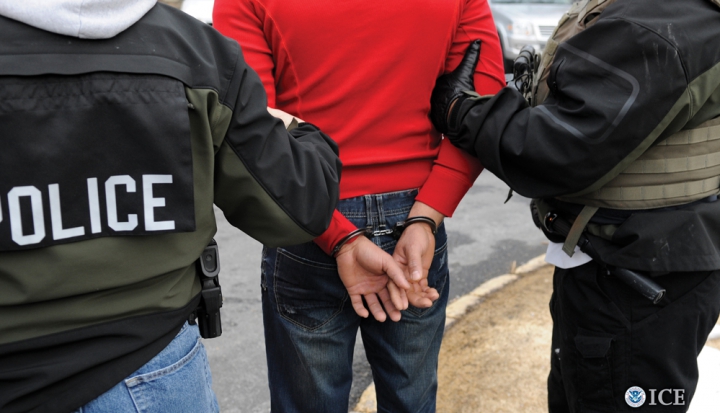 In the spring of 2017, U.S. Immigration and Customs Enforcement (ICE) detained and eventually deported Jorge Taborda’s wife and oldest son. The Tabordas had been living in the United States for over 19 years. When ICE came to the door, Jorge and his younger son—a U.S. citizen by birth—were not at home. Jorge was able to find refuge at the Holy Cross Retreat Center near Las Cruces, New Mexico. He has been living there since May 2017.

“Last year I lost my wife, I lost my family, I lost almost everything in my life,” says Taborda through tears. “We were in this country living in peace, working in peace, paying taxes—but this administration didn’t want to recognize that, they wanted to count our family as a number.” He describes living at Holy Cross as “a great gift from the Lord.”

Franciscan Conventual Father Tom Smith, director of the Holy Cross Retreat Center, is the architect of that gift. In the past he had worked with undocumented people in southern Indiana and Kentucky, but he says the mentality was that if you didn’t do anything wrong you’d be OK to live your life.

“It was when I started going to some Know Your Rights trainings here in New Mexico in 2017 that I sensed people becoming more afraid,” says Smith. “And it was becoming obvious that [deportation] was not just happening to criminals. ICE was going after anyone undocumented. That was a shift, and it concerned me.”

Smith asked the community organizing group Comunidades en AcciÓn y de Fé (CAFé) if it would be helpful to have a place for people to stay since the retreat center had extra room. They said yes, so he talked about the idea with the Franciscan leadership. “St. Francis of Assisi cared for the poor and rejected,” he says. “We welcome people who are sick and coming from out of town to get care. And we welcome refugees and asylum seekers as well.”

At Holy Cross, Taborda has a room for himself and his 16-year-old son, and he has access to his own kitchen as well as the larger retreat center kitchen. The center is on 40 acres of land, so there is room to walk outside. His son can drive now and is able to get himself to school. While his situation is comfortable, the anguish Taborda feels is apparent.

“I was doing everything—paying rent, buying food, taking care of my kids,” he says. “Now I have no right to take care of my son, and I depend on help for what I need. It’s not good for me.” He recalls his years volunteering with the Red Cross in the United States. He drove emergency vehicles to help with disaster relief in Louisiana, Oklahoma, New Mexico, Arizona, North Carolina, Florida, and more. “We are an honest family, contributing to our country,” says Taborda. “We are now being denied our human rights, our rights as community members.”

The community in Las Cruces has rallied around Taborda. CAFé provides a counselor who comes to see him, Catholic Charities works with an immigration lawyer who is trying to help, and there is a doctor who checks on him as well. “I see what we are doing as a faith issue and a moral issue,” says Smith. “We are providing shelter for someone in need—it’s the call of the gospel.” He recites Leviticus 19:34: The alien who resides with you shall be to you as the citizen among you; you shall love the alien as yourself, for you were aliens in the land of Egypt.

“I’m not trying to flaunt the government,” he adds. “That’s not the intention. We are here to assist a man who wants to stay here to support his son.”

Smith is clear, however, that what Holy Cross offers Taborda isn’t technically sanctuary in terms of safety. “If ICE shows up and says, ‘We’ve heard that he’s here and we want to see him,’ I can say no,” says Smith. But lawyers have informed him that a signed warrant is a different story. “We choose to call what we offer Franciscan hospitality,” says Smith. “We are providing a place where someone can live and be comfortable while they’re trying to keep their family together.”

According to Jesuit Father Bryan Pham, a canon and civil lawyer and a professor at Loyola Marymount University in Los Angeles, the notion of sanctuary goes back many centuries to kingdoms in the Far East. It was essentially a temporary refuge where someone could negotiate a precarious situation with a pursuer.

These days the church does not have secular authority, so sanctuary is not a law but rather a custom or a tradition. “There is no way to enforce it, especially in the United States, because of the separation of church and state,” says Pham. “Someone can claim sanctuary, but U.S. law allows authorities such as ICE to not respect it, especially if they have a valid warrant.”

ICE has operated with a policy of avoiding Safe Zones, which are locations where it has traditionally not raided or arrested people. Those include schools, hospitals, and churches—places where people who are in need go, where the most vulnerable are found. “As a practice, ICE has not gone there,” says Pham. “But it’s not a law, so it can change or be interpreted at a local level.”

Jesuit Father Warren Sazama, pastor of Saint Thomas More Catholic Community in St. Paul, Minnesota, says his is a sanctuary parish, and he feels that the parish is on good legal ground. “You’re violating the law if you harbor a fugitive,” he says. “We are offering a place to stay for people in crisis situations.” He acknowledges that if authorities came with a legal search warrant, they would let them in. “We are not doing anything illegal, just offering a place to stay for people who need it and trying to support them humanely,” he says.

Sazama believes that optics play a big part in sanctuary. “There’s a moral sense of people not violating this tradition,” he says. “Even the current administration is not dragging people from churches and schools.” He references the moral outrage that President Trump faced when his Zero Tolerance policy included separating children from their parents at the border. “A politician doesn’t want to provoke that,” says Sazama. “Grabbing people out of churches would run that risk. Some politicians are motivated by optics, if not their own sense of morality.”

In a neighborhood with many professionals and few immigrants, Sazama says his parish went through a five-month exploratory process as they considered becoming a sanctuary space. “We try not to make it political, and in my mind it’s not, but this was triggered by the 2016 election,” he says. With undocumented people living in fear of deportation, the conclusion was that providing sanctuary was a necessary religious response. “As Catholics you can’t be anti-immigrant,” says Sazama. Many in the parish asked, “How can we be Christians and not do this?”

Saint Thomas More has hosted a family from Africa that was fleeing a civil war, a father from Central America traveling with his children in fear for his life because of threats from a drug cartel, and another family that stayed long term. “We are able to give people a safe place to stay until their next move,” says Sazama.

The parish has a two-story building that was once a rectory for priests, and though none live there, it is up to code as a shelter. “It’s quite a nice apartment with a kitchenette, a full bathroom, and two bedrooms,” says Sazama, adding that the people who have stayed there are regular families doing regular things. “They cook meals, they attend church, the kids play on the playground of the school that’s associated with our parish,” he says. The parents sometimes work, and there’s a worry that they’ll be picked up and not be able to come home. “That’s a constant fear they live under, but they do what families do,” says Sazama.

When asked if he’d recommend that other parishes consider becoming places of sanctuary, he says yes immediately. “We have rallied, and it’s been very meaningful for our parish,” he explains. “We’ve gotten all kinds of support.” They have a surplus of funds collected to help the families—none of which has come out of their operations budget. The parish also runs a free store where people can come and get clothing that’s been donated at no cost.

Sazama says they have a whole team of volunteers to help with this effort who offer everything from translation aid to legal services. “We see it as a way of living out the Good Samaritan parable,” he says. “If you see someone on the roadside bleeding, do you walk by or help them out?”

Sanctuary laws aside, there is something higher at work for both the Holy Cross Retreat Center in New Mexico and Saint Thomas More Catholic Community in Minnesota. “The faith community needs to be a prophetic place,” acknowledges Pham. “Just because we cannot enforce our law over U.S. authority doesn’t mean that we should stop calling ourselves sanctuary. To offer sanctuary and let people know there are places where they can feel safe even though they may still be arrested, that’s what we do as a faith community—that is what Christ would do.”

Melissa Walker is the author of nine books for kids and teenagers, including Let’s Pretend We Never Met (HarperCollins).