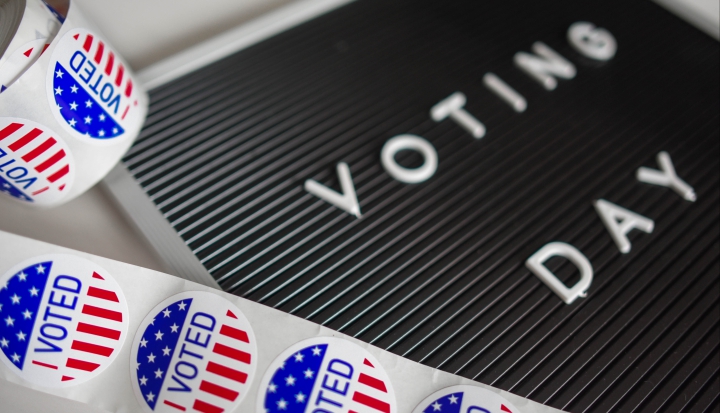 I try to maintain a moderate diet of news consumption. I will put on a political podcast while fixing dinner. I read the New Yorker while riding the train, though I admit I subscribed partially for the tote bag, which has yet to arrive. At night, I usually catch sports and weather on the local news, helpful for keep track of how the Bears are doing and knowing how cold it will be in the morning while waiting with my daughter for her school bus.

No matter the outlet, the elections have been unavoidable. Notably, one story that seems to be fading from the narrative of American elections is that of the “Catholic vote.” Some have argued that such a vote—cast by the descendants of Irish, Italian, Polish, and German immigrants who live in Rust Belt swing states and who tend to favor generous social aid programs, are conflicted about questions of war and peace, and hold less favorable views of marriage equality and reproductive rights—reached its apotheosis in the Reagan years. Today, it no longer exists. Reporters and pundits have moved on to analyze other groups considered key: young voters, Latino/a voters, and in some districts, Muslim voters.

To the chagrin of some and the joy of others Catholics have always been part of the American electorate. They were the only religious group specifically excluded from Roger Williams’ otherwise tolerant Rhode Island. William Penn, whose Quakers had faced religious persecution in England, sympathetically extended toleration to Catholics, welcoming their settlement in Pennsylvania. Still, colonial Pennsylvania imposed a religious test on officeholders that barred Catholics from seeking state office.

Only Maryland’s colonial charter offered full religious tolerance, as well as suffrage rights to all free men, not just landowners. Consequently, these provisions encouraged Catholics and Protestant to migrate from the British Isles, as well as from other less tolerant colonies.

Religious violence at the outbreak of the English Civil War in 1649 prompted the Maryland assembly, a religiously mixed body overseen by a Protestant governor, to pass the Tolerance Act, stating “noe person or persons whatsoever within this Province . . . shall from henceforth bee any waies troubled, Molested or discountenanced for or in respect of his or her religion nor the free exercise thereof.” Maryland’s Tolerance Act was repealed in 1691, though “the free exercise thereof” would be resurrected a century later in the language of the First Amendment’s guarantee of religious freedom.

The 1800 presidential contest between John Adams and Thomas Jefferson was the first election to truly feature a contest between two defined political parties. Adams’ Federalists envisioned an expansive role for the government, especially regarding foreign policy and finance. Jefferson’s Democratic-Republicans favored a more restricted role for the federal government. Federalist Charles Carroll, the only Catholic to sign the Declaration of Independence, tried to rally his co-religionists to Adams.

Catholics were leery, however, of a Federalist-backed proposal stating immigrants had to reside in the United States for 14 years instead of five before they could apply for naturalization, as well as restrictions limiting voting rights to landowners. They were much more sympathetic to Jefferson’s liberal naturalization policies, zealous protection of the free exercise of religion, and support for voting rights for small artisans as well as landowners. In short, Catholics believed that Jeffersonian Democratic-Republicans would protect Catholics’ right to be left alone. The Catholic vote, especially in the key swing state of New York, helped tip the 1800 election in Jefferson’s favor.

In the run-up to the Civil War, Catholics tended to favor the pro-slavery Democrats. This was not out of a Catholic love of slavery, but instead deep distrust of any party that built a coalition with abolitionists, who in addition to opposing slavery, also tended to oppose Catholic immigration and the sale of alcohol.

One such figure was Lyman Beecher. A prominent Presbyterian minister and father of several famous abolitionists and temperance advocates, including Uncle Tom’s Cabin author Harriet Beecher Stowe, Lyman Beecher himself tended to take a more conservative anti-slavery line. The same cannot be said for Beecher’s anti-Catholicism. After a particularly vitriolic sermon in 1834, some of Beecher’s followers burned down an Ursuline convent.

Catholic distrust of abolitionist movement and resentment over the 1863 military draft, which many believed to have disproportionately targeted Irish Catholic immigrants for conscription, led many Catholics to support George McClellan over Abraham Lincoln for president in 1864. Lincoln won, but McClellan’s Catholic support likely made the vote closer than it otherwise may have been.

The root of much of the distrust of Catholics in electoral life, either as voters or candidates, were American ideas about the pope. These anti-papal beliefs vary in specifics, but generally held that the pope meddled in world affairs for his own benefit and that if a crisis arose Catholics would be loyal to him rather than to the United States. By 1911 these views were circulated weekly to 1.5 million readers courtesy of The Menace, an anti-Catholic newspaper. During its relatively short existence, The Menace reported on, among other things, murders perpetrated by the Knights of Columbus and allegations that the church was plotting to populate the United States with European criminals.

In reality, the outbreak of World War I showed that Catholics’ views were more likely to be influenced by their national identity than their religion. American Germans, Catholic and Protestant, balked at fighting against their fellow Germans. Many Irish Catholic immigrants, who had migrated to escape British rule, were loath to fight and die on Great Britain’s behalf. At the war’s end, American Poles applauded President Woodrow Wilson’s support for an independent Poland, while Italian Americans were disappointed by what they considered the high-handed treatment of their home country at the Paris Peace Conference.