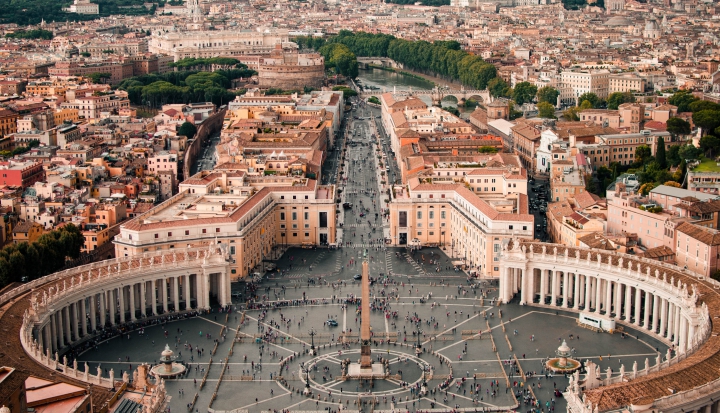 Last year Pope Francis called bishops from around the world to gather in Rome for a synod on young people this October. It’s the 15th general synod since the first took place after Vatican II, in 1967. But the church has a rich history of meetings and debates that predates Pope Paul VI.

In Greek, synod is the word for “meeting,” and throughout most of church history, synods have been about as exciting as any run-of-the-mill organizational meeting anyone has attended in their working life. They were often staid affairs to settle points of doctrine or church governance, usually within a certain geographic area where there was a dispute.

Sometimes, though, a synod’s debates and decisions had profound consequences for the future of the church, from when to celebrate Easter to whether to put a corpse on trial.

A synod is distinct from a council, like the Council of Nicaea, which produced the earliest version of the Nicene Creed, in one important regard; the pope presides over a council. Consequently, denominations that do not recognize the pope also use synod to describe meetings of church leaders.

The term’s use in the United States peaked during the mid-19th century as many Christian churches were organizing to evangelize the frontier, tend to the spiritual needs of recently arrived immigrants from Protestant countries, and respond to the increasingly fractious debate regarding the abolition of slavery.

With nearly two millennia of history behind scripture, it is sometimes hard to imagine that there was a time when fundamental questions about the nature of Jesus or what books should be in the Bible were up for debate. The earliest synods, though, met to debate these questions.

In 393, the Synod of Hippo drafted and approved the first list of canonical books in the Christian Bible; four years later, in 397, the Council of Carthage ratified this list. The Synod of Gangra, meeting in what today is Turkey, organized to condemn the Manicheans, an early offshoot of Christianity that grew to compete with the church for followers. At Gangra, the bishops declared several Manichean practices, such as refusing sacraments from married priests, wearing certain types of ascetic clothing, and fasting on Sundays, were anathema for Christians.

Synods could also be called by secular leaders to settle religious questions for their subjects. One of the most famous of these was the Synod of Whitby. In 664, the Northumbrian king, Oswiu, mandated a meeting of the two competing churches in his kingdom: the older Ionian Christians, who had come from Ireland, and the recently arrived Roman Christians.

One of the biggest bones of contention between the two groups was the proper celebration of Easter, with the Ionians tying their celebration to the date of Passover on the Jewish calendar and the Romans declaring Easter should always be on a Sunday calculated using a complex set of astronomical tables.

The division between the two traditions ran straight through Oswiu’s own household; he was an Ionian Christian and his wife, Eanfled, celebrated according to the Roman tradition. This led to Eanfled and her retinue celebrating and feasting while Oswiu and the rest of his family were forced to continue their Lenten fast. As judge of the synod, Oswiu ultimately sided with the Roman church, and many adherents of the Ionian tradition returned to Ireland.

In late-17th-century Russia, Peter I organized a club for his friends, “The Most Drunken Synod of Fools and Jesters.” Set up to parody the rituals of the Russian Orthodox Church, the club grew to include nearly every member of the upper echelons of the tsarist government, including actual clergy members of the Russian Orthodox Church. When Peter began scheduling his synod’s drinking contests to conflict with Orthodox holidays, some critics began to see Peter’s deliberate irreligion as a sign of the antichrist. Peter backed off, protesting to Orthodox officials that he was not mocking the Orthodox Church, but the Catholic Church. A leery truce between Peter and the Orthodox Church followed.

The most infamous synod, though, is the late ninth-century Cadaver Synod, where Pope Stephen VI put the corpse of one of his predecessors, Pope Formosus, on trial.

While he was alive, Formosus was a bishop in the Roman suburb of Porto and a successful missionary in Eastern Europe. Suspicious of Formosus’ success, Pope John VIII excommunicated him, accusing Formosus of violating church laws against holding two offices at once and openly aspiring to be pope. Pope Marinus reinstated Formosus after John’s assassination by members of his own household who first tried to poison John and, when that did not work, beat him with a hammer. Formosus himself became pope in 891 and served for five years before dying of a stroke.

Stephen VI decided to re-litigate Formosus’ original excommunication. Stephen’s legal reasoning is difficult to follow, and some scholars have posited that Stephen was insane. Formosus’ exhumed corpse was dressed in papal vestments, propped up in the basilica of St. John Lateran, and put on trial, with one of the basilica’s deacons appointed to speak on Formosus’ behalf. Found guilty, all decrees from Formosus’ papacy were nullified, three of his fingers were cut off, and his body was thrown in the Tiber River.

In the wake of Vatican II, Paul VI instituted the Synod of Bishops. In this case, synod refers to both a permanent advisory body of bishops who serve “to foster closer unity between the Roman Pontiff and bishops,” as well as the gathering where bishops from across the globe share ideas, usually on a certain theme, like this year’s on “Young People, Faith, and Vocational Discernment.” Paul foresaw the power of a synod to shape the church’s future as something that is still evolving. “Like every institution,” Paul wrote, “[the Synod of Bishops] can be more perfected with the passing of time.”