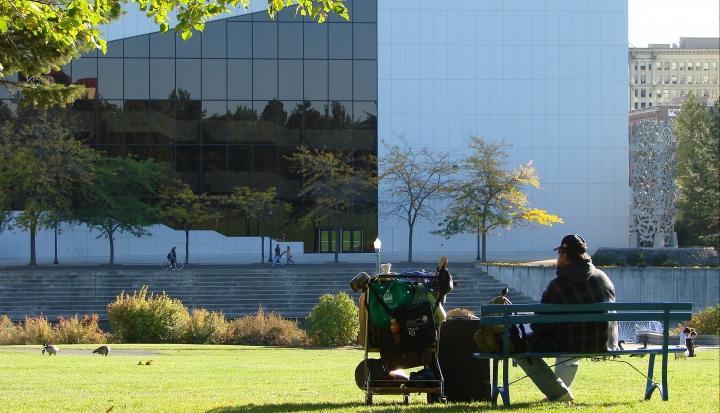 Rob McCann describes homelessness as a spiritual “gut punch.” Yet for almost 20 years McCann has risen each day to see the issue up close around his Washington home.

“Homelessness and poverty are hard to look at,” McCann says. “It makes us all feel a little uncomfortable. People don’t want to see it. . . . It reminds them too much that maybe they are not doing enough themselves or reminds them of people in their own families or circles of friends who have also struggled.”

McCann is the president of Catholic Charities Spokane, which provides food, legal services, counseling, and shelter to people in the area. One of its largest programs—sheltering the homeless—and one of its shelters—House of Charity—have become hot-button issues for local residents.

There are around 1,245 people experiencing homelessness in Spokane, according to a 2018 count, and every day there are crowds in front of the shelter.

“Spokane has seen a living, breathing solution to homelessness,” McCann wrote in a recent local Catholic Charities newsletter. “For these past 20 months, every single chronic street homeless man and woman has had a place to go for a bed, a meal, a shower and a chance at protecting their basic human dignity.”

However, the services ended in August due to health concerns in the facility and safety concerns in the surrounding area. Building renovations and an increased security presence, along with more janitors and full-time staff, are needed to provide the 24/7 services Catholic Charities envisions.

The current staff was stretched too thin to respond to all the needs, even though the core idea of providing full-time services was working. McCann says, “It’s frustrating when you can demonstrate for 20 months an actual, real, live solution to homelessness for the entire community but then you have to turn it off.”

Some of the people who gained shelter through the expanded Catholic Charities services are back living on the street. Their presence has not always been met with kindness from local businesses. This summer, a nearby business owner started a petition to stop Catholic Charities from building permanent housing units nearby for the chronically homeless.

Area businesses spoke out about the shelter, saying the concentrated population of people experiencing homelessness was driving up crime rates. A nearby 7-Eleven owner said he loses $100 of merchandise a day because of shoplifting.

Fliers circulated accusing McCann of creating a “small army” of homeless people for his “Spokane slum empire” and that he planned to build 9,000 housing units for the homeless. The fliers said Catholic Charities did not allow police in their shelters and that the buildings were the location of several sexual assaults.

McCann denies all of these claims outright. Such attacks on and misinformation about people experiencing homelessness are heart-wrenching, McCann says.

“Most of our clients are dual diagnosed with both mental health and addiction diseases,” he says. “We don’t attack or blame people for getting cancer or having high blood pressure, but we certainly do when they have mental health or addiction issues, and that’s just plain ridiculous.”

However, McCann counts the media coverage, even the negative portrayals, as a blessing. He wrote in the recent newsletter that the attention is making homelessness a topic of conversation for the people of Spokane. And, during this whole time, Catholic Charities is continuing its work.

“Wherever there is a challenge to the dignity of every human person, we will be there with our arms and our doors open,” McCann wrote. “Our prayer is that the entire community will join us in this important work.”