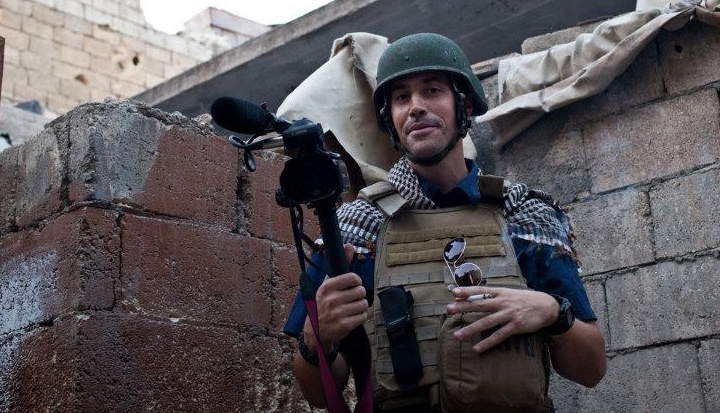 No story is faceless. Every action we take—every change in foreign policy or bomb dropped—affects real people.

James Foley understood that. He died trying to get us to understand it, too.

“I believe that frontline journalism is important. Without these photos and videos and firsthand experience, we can’t really tell the world how bad it might be,” he said in a 2011 interview.

I met Foley as his friends and family were searching for the words to say goodbye. A week had passed since news of his death surfaced in a graphic execution video by members of ISIS. I was a junior at Marquette University in Milwaukee, which Foley attended as an undergraduate. People took the lectern of the campus church to remember their friend the journalist.

Another: He gave his life “telling the stories of truth that make a difference.”

That day in church opened my eyes to the possibility and power of journalism to make a difference. The stories we tell matter. Whose stories are told, or go untold, shape history. In that moment I knew I was meant to be a human rights journalist and one willing to go to the margins.

In the years since, conversations with Foley’s friends and family have colored in the facts of his life. Through their stories, I met Foley the student, the teacher, and the journalist. Most important, though, I met Foley the man. The man with a big heart and a mission.

The principles Foley stood for are in need today. Our neighbors are increasingly valued by the extent of their similarity to ourselves. The damages of division and indifference are pushing deeper. Foley fought for compassion. He is a reminder to go to the margins and look deeply at the wounds of injustice yet hold steadfast to a deep, enduring hope for change.

Foley grew up in Wolfeboro, New Hampshire, the oldest of John and Diane Foley’s five children. While studying history at Marquette University and playing for the school’s rugby team Foley came face-to-face with marginalized people. “With Marquette, I went on some volunteer trips to South Dakota and Mississippi and learned I was a sheltered kid and the world had real problems,” he wrote in a 2011 letter to the university.

After graduation Foley bounced around jobs but always found a home working alongside those on the margins. He taught in inner-city Phoenix schools for Teach for America and helped unwed mothers in Massachusetts earn GEDs while completing his master’s degree in writing from the University of Massachusetts Amherst.

The desire to tell meaningful stories pushed him to what he described as his calling: journalism. In 2008 he earned a master’s degree from the Medill School of Journalism at Northwestern University. Conflict journalism became a way for Foley to marry his passions for social justice and storytelling. His photos and videos documented the lives of fighters and families alike. His work told the story of what happened between the bursts of gunfire—the families whose lives were forever altered, the soldiers whose dreams of a better future compelled them to risk their lives.

Foley was risking his life, too, in order to show the world the humanity of the rebels. He reported from Afghanistan and Libya, where he was captured by troops loyal to Colonel Muammar Gaddafi on April 5, 2011. At the time Foley called the choice to be on the front lines that day the “biggest mistake of our lives.” Foley and two other journalists were held captive for 44 days before their release.

However, just months later, he returned to the Middle East conflict. “Feeling like you survived something, it’s a strange sort of force that you are drawn back to,” he said. He first stopped in Libya, then focused on the Syrian civil war.

People to this day wonder why Foley returned, why he willingly walked into the most dangerous place on earth. He had to tell the stories of those whom history would otherwise forget. He had to take the risk in the hope that his work could be part of a peaceful and compassionate tomorrow.

On November 22, 2012, Foley was kidnapped in Syria with British journalist John Cantlie while traveling to the Turkish border. ISIS forces demanded ransom from the United States for his release. The messages meant little to the U.S. government because of its policies against trading hostages or paying ransoms.

The Foley family received infrequent messages from ISIS forces but never knew his location. During his final days, he shared a cell with 17 other hostages. His final words, memorized and dictated by a freed prisoner, detailed how the group supported one another with games and lectures despite their dire circumstances.

“I have had weak and strong days,” Foley wrote in that final letter. “We are so grateful when anyone is freed but of course yearn for our own freedom. We try to encourage each other and share strength.”

On August 19, 2014 a video showing Foley’s execution by ISIS went viral. Later Foley’s mother Diane posted on Facebook: “We have never been prouder of our son Jim. He gave his life trying to expose the world to the suffering of the Syrian people.”

When people held captive with Foley began sharing stories of their time together, Heather MacDonald, one of Foley’s friends, was not surprised to hear about the strength of Foley’s character.

“Sharing his food, standing up to threats, maintaining a positive attitude, tending to others who are hurt—these are qualities that don’t come ‘out of the box,’ ” she said. “They are rare and require discipline to embody in any circumstance. . . . For Jim, these qualities were natural.”

My journalism journey so far has taken me from covering gang violence in Baltimore to religion in New York City to childhood malnutrition in rural Haiti. There, across weather-worn rocky mountain trails and under stifling rays of sun, are health and wealth inequalities the rest of the world does its best to ignore. Children die at a stunning rate at ages you could count on a single hand. Diseases the United States has eradicated run rampant, despite the mere 800 miles separating the two countries.

These moments learning about hardship day after day, week after week, gnaw on the edges of my faith. Endurance is a true test of faith, but as my pastor used to say, “Can you praise God as loudly and proudly when nothing is going right as when you have only blessings?” Foley’s example is a kind of North Star, a reminder to center myself on the truth each story makes clearer: Helping tell the stories of the people we marginalize matters. Foley reminds me to search for these kinds of stories and to lean in when reality starts to hurt.

In the Gospel of Luke, when Jesus tells the parable of the Good Samaritan, he forces his audience to think differently about their neighbors. The apathy of the priest and the Levite, as well as the compassion of the Samaritan, challenge Christians to see the humanity of the people marginalized by conventional society.

Foley’s work as a journalist did the same. He helped others, thousands of miles away, see the humanity of those caught in the indiscriminate heartbreak of war. He helped bring a voice to the afflicted, as called for in Proverbs 31:8: “Speak up for those who cannot speak for themselves, for the rights of all who are destitute.”

Photo by Nicole Tung. Used with permission from the James Foley Foundation.