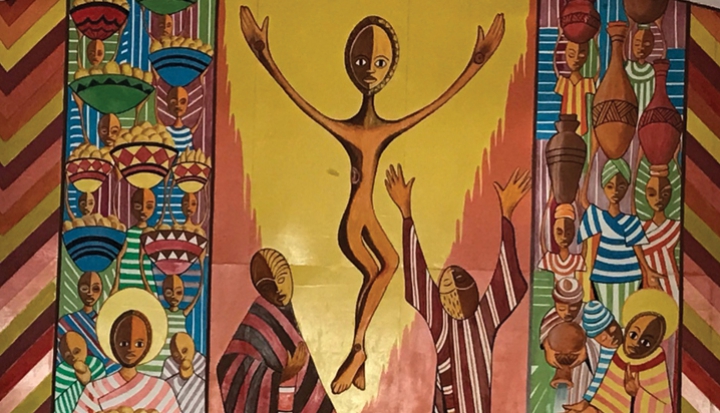 Growing up, Pentecost was a big deal in my parish, with a large outdoor youth Mass and barbecue. One by one we would put our prayer intentions for the year into a small fire and then after Mass indulge in a giant sheet cake and sing “Happy Birthday.” Fun and faithful, it was a celebration of the sending of the Holy Spirit into the community.

Ever present but rarely focused on, the Holy Spirit gets short shrift in prayer and liturgy. Religious art frequently depicts the Spirit as a small dove floating around the father and son. The dominant images of fire and a dove cast the Spirit as elusive and other in contrast to images of Jesus Christ. In the Pentecost story, however, the Spirit penetrates and strengthens the early Christian community.

“All of them were filled with the Holy Spirit and began to speak in other languages, as the Spirit gave them ability. . . .  At this sound, the crowd gathered and was bewildered, because each one heard them speaking in the native language of each” (Acts 2:4, 6). They do not all suddenly speak the same language. The Spirit does not reveal uniformity; the miracle is one of unity in diversity and understanding.

In 2015 I spent the fall teaching at Hekima University College in Nairobi, Kenya. Hekima is at once welcoming and intimidating. Students come from all over Africa to study theology, peace studies, and international relations. Every Wednesday the entire campus joins together for Mass and lunch. Mass at Hekima gave me a glimpse of what Pentecost’s unity in diversity might have felt like.

Prayer at Hekima is in at least five languages. While the Mass is celebrated in English, prayers and songs migrate seamlessly in and out of French, Swahili, Latin, Igbo, Greek, Shona, and other African languages. At first I felt intimidated, but then I realized that no one knew all of the languages. Despite the differences, there was understanding and we were one in prayer.

In my work I have been lucky to travel to many countries, and I always enjoy going to Mass with different communities and in different countries. At Hekima I experienced a deeper sense of unity. It was not just that we were praying the same prayers in different languages. At Hekima we did not know the words and yet somehow there was understanding. It was a gift of the Spirit.

In January I traveled back to Hekima for two weeks and once again found myself part of this diverse community of prayer. As we sang a song, “Ed’agbon wen hia,” in which the refrain repeats “God is good” in a dozen African languages, divisive anti-immigrant, anti-African rhetoric was dominating the news from America. Fear of different languages and cultures dominates today’s anti-refugee and anti-immigrant resurgence.

Speaking on the World Day of Migrants and Refugees, Pope Francis noted, “It is not easy to enter into another culture, to put oneself in the shoes of people so different from us, to understand their thoughts and their experiences.” Still we are called to welcome and create spaces of encounter.  It is in the turning away from our neighbor in need where sin lies, according to Francis. When we focus on our differences, it is easy to hold one’s own culture and way of praying as superior. This is not the message of Pentecost.

According to theologian Gustavo Gutierrez, “no theology is without its own accent in speaking of God—differences in speaking must be respected. It is not imposed uniformity that is required but unity in diversity.” Praying together in different languages is one way that we encounter one another and the Holy Spirit in our midst. When I let go of my own anxieties I was able to simply be one in prayer with the Hekima community.