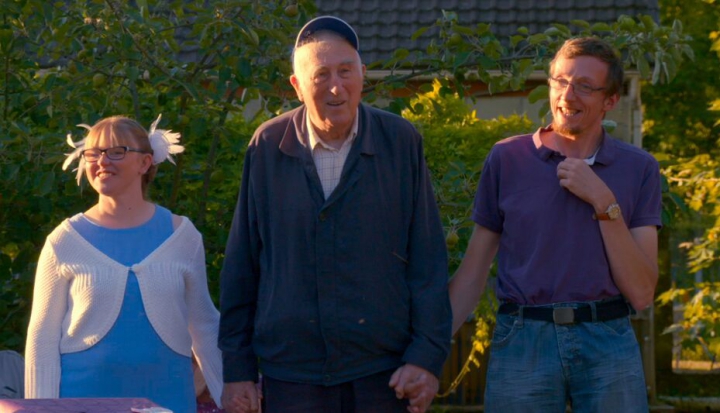 Getting dressed. Going to work. Enjoying dinner with friends or family. Celebrating an engagement. These are just a few of the moments a new documentary, Summer in the Forest, captures that provide a glimpse into the lives of people with disabilities living in L’Arche communities.

Through these day-to-day stories, the documentary traces Jean Vanier’s founding of L’Arche—French for “The Ark.” In the 1960s, Vanier invited a few men with intellectual disabilities who had been living in an institution to join him in a small community on the edge of a forest in Trosly-Breuil, France. Today there are more than 150 L’Arche communities in 37 countries worldwide, where people with and without disabilities live together as active citizens participating fully in life.

Summer in the Forest is an invitation to get to know people you might not otherwise encounter. While a main subject of the film, Vanier never feels too much in the spotlight. His own reflections make up the only voiceover, letting the stories of those he serves speak truth to the power of his grace and kindness.

Instead of focusing on the communities’ founder, the film shines a light on the humanity of people with disabilities simply by providing a window into their existence. After spending the bulk of the documentary at the L’Arche community in Trosly-Breuil, the film follows Vanier on a trip to a L’Arche community in Bethlehem, emphasizing how geography does not limit Vanier’s message of love and solidarity.

How do we find peace? How do we come to know ourselves? What does it mean to be in community with each other? These are some of the questions that shaped the experience for director Randall Wright, who spoke about his time making the film.

Why did you feel it was important to tell this story right now?

I think it’s an important story to tell now, and again and again. We all have to face the question: What are we meant to be? A successful person is someone who accepts who they are and opens their arms to everyone around them. I think we live in an upside down world and the L’Arche world is the right way around. I’ve seen the horribleness of what goes wrong in our culture in all parts of the world. This is a countercultural film that’s saying genuinely that if we lived more like L’Arche the world would be a better place.

Jean is an incredible activist, and of course he’s a great theologian. I had read books by Jean and knew that he was quite exceptional, but I wasn’t prepared to take on what he was talking about, which is that you have to address why you’re not willing to meet someone who’s different than you. Jean is quite extraordinary in creating an incredibly universal and welcoming world. And he really trusts that the world he creates is a better world. It’s a reflection of love that comes out of his faith. He’s asking us a very tough question: Are we prepared to get to know someone different to us?

How was working on this project different from other films you’ve made?

As a filmmaker, I typically dictate things and choose what to film. Nearly everything in this film was offered to me spontaneously by people. I had to give up the whole idea of telling people what to do. It’s an experience where you have to learn how to communicate with people openly with your heart. You can’t go in as a professional. You have to drop your disguise, you have to be yourself.

In most societies, when we interact with others we play almost a type of parlor game where we tell people about ourselves and the things we do so they can see where we stand. At L’Arche, none of that matters. No one responds to that. All they respond to is whether or not you’re serious about having a friendship. It’s a wonderful reversal of values.

What did you personally take away from working on the film? What kind of effect did it have on you?

Once you have an experience of L’Arche, it feels as though it was always waiting for you there to have it. I went in as a middle aged person with a lot of basic lessons of life to learn, and I absolutely loved it. It’s transformed my life. I just loved the opportunity to come down to earth. I think it would change anyone who entered a L’Arche community with an open heart.

What are you hoping that viewers will think or feel after watching the film?

I hope it’s the unexpected sense of beauty. There’s a great kind of liberation in getting to know someone different than you. How we meet each other is an incredibly joyful thing.

Jean Vanier’s whole inspiration is to live like Jesus. The Jesus that he discovered is the Jesus of the poor, on the side of the most vulnerable. When everything has gone wrong and you’re at your weakest you are most in touch with your humanity and most in touch with God.