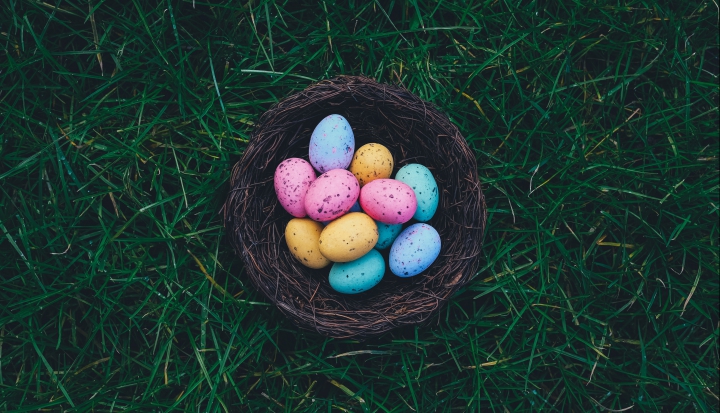 In many Romance languages, the word for the Feast of the Resurrection is tied directly to Passover: Pâques (French), Pascua (Spanish), and Pascha (Latin) all come directly from Pesach, the Hebrew word for Passover.

To understand why, we first have to go back to the Hebrew Bible and the story of the first Passover. Moses tells the Israelites to slaughter a passover lamb and paint its blood on their door lintels. Then, when the Lord strikes down the firstborn of every Egyptian family in retribution for the enslavement of the Israelites, he “will pass over the door and will not allow the destroyer to enter your houses to strike you down” (Ex. 12:23).

Paul was the first to connect the risen Christ to Passover. In 1 Corinthians 5:7, he refers to Jesus as the paschal lamb who has been sacrificed for his people’s salvation. Add to that the fact that Jesus celebrated the Last Supper with his disciples during Passover and it makes sense that even today the Feast of the Resurrection is connected with the Jewish holiday.

In English, this tie remains in our practice of lighting the Paschal candles and celebrating the Paschal mystery. But the meaning of the holiday’s name itself is a little more unclear: Where in the world did the word Easter come from?

The short answer is that nobody really knows. Some historians suggest that it came from the phrase hebdomada alba, Latin for “white week,” used to describe the white garments new Christians wore when they were baptized during Holy Week. In Old German, the word became esostarum and, eventually, Easter.

The Venerable Bede, a seventh-century Anglo-Saxon historian, writes that the word Easter comes from the goddess Eostre, an ancient goddess of fertility and the goddess of the dawn who originated in what is now Scandinavia. Over time, early Christians started referring to the Feast of the Resurrection by the name of the month in which it was celebrated—Eosturmonath (what we now call April). This theory neatly ties in with some of our other Easter customs. Easter eggs and the Easter Bunny, for example, are also considered ancient symbols of fertility and tied to the worship of Eostre.

Another, related theory suggests that Easter comes from an old German word for “east,” which in turn is derived from a Latin word for “dawn.” In the past, the word easter could mean “to turn toward the east” and didn’t necessarily have any implied religious meaning.

Historians are never going to figure out exactly where or when Easter was first used. It is one of the oldest Old English words and has been in use for over a millennium, making it impossible to detangle the strands of its history. And, in the end, it is unimportant whether Easter comes from the goddess of the dawn or the Latin word for dawn. In whatever language and whatever etymology, Easter is a time of resurrection and rebirth, a time to celebrate the risen Christ and God’s promise of eternal life.