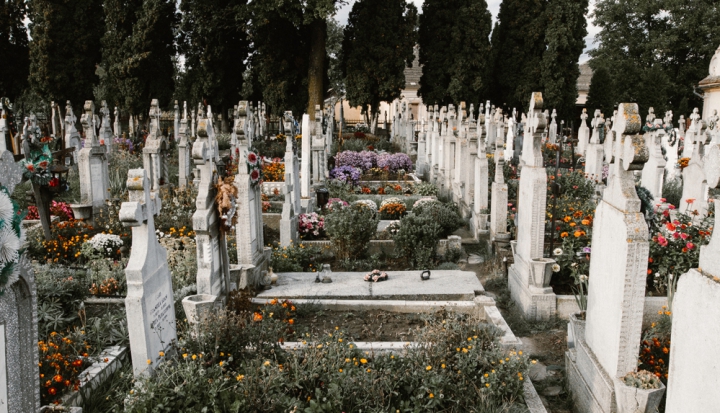 Sometimes when I visit my parents’ graves, I remember going as a boy to the same cemetery with my mom and grandmother, carrying the plastic flowers as they bent over to dress the graves. I was never thrilled to go—I would rather have been running bases, riding a bike, or throwing a ball. It’s different now, and not just because my body doesn’t tolerate those activities so well anymore. The only one of the three of us left, I’ve only just begun to catch on to what they knew.

Burying the dead is a corporal work of mercy, although the practice isn’t strictly about burying a dead person. It also encompasses praying for the dead, including attending their funerals and visiting their graves. The corporal works come from Jesus’ story of the sheep and the goats in Matthew 25, the “whatsoever you do” acts. Although Jesus’ list omits burying the dead, it’s in there now.

In 2016, when Pope Francis described caring for our common home as a new work of mercy, a Vatican news release noted, “Since biblical times, Christians have been called to carry out six acts of mercy, listed in St. Matthew’s Gospel—giving food and drink to the hungry and thirsty, welcoming the stranger, clothing the naked, visiting the sick and the prisoners—with a seventh one, burying the dead, added in medieval times.” It’s a casual mention, and while it’s somewhat unclear how burying the dead made the list, that’s less important than why.

In The Works of Mercy (Rowman & Littlefield), Jesuit Father James Keenan summarizes the likely reason it’s included: “The significance of burying the dead is then rooted in the profound respect that Christians have for the human body. The human body created and redeemed by God is to be raised up by God in glory.”

Various sources, including the Catechism of the Catholic Church, point back to Tobit, the eighth-century BCE Israelite who risked his life doing good deeds for his fellow exiles: “I would give my bread to the hungry and clothing to the naked. If I saw one of my people who had died and been thrown behind the wall of Nineveh, I used to bury him” (Tobit 1:16–18).

Like Keenan, the catechism also refers to St. Paul’s description of the body as a “temple of the Holy Spirit” (1 Cor. 3:16). By the time of Thomas Aquinas, these good deeds were already known as “corporal” works (derived from Romance language words for “of the body,” the concept also suggests works done for the body by the body), including burying the dead. In the Summa Theologica, Aquinas writes, of “the various needs of our neighbor,” some “affect the body, and are relieved by corporal deeds. For corporal need occurs either during this life or afterwards.” Adding a more personal context, he further notes “a man’s fondness for his own body while he was yet living, a fondness which kindly persons should imitate after his death.”

It turns out I’ve practiced this work of mercy for years without recognizing it as such. My regular prayers have always included an “Eternal rest grant unto . . . ,” listing and over time added deceased family members and still included people I’ve named for more than 20 years. I’m reluctant to remove names—is there a statute of limitations?—partly because I fear it might disrupt my almost perfunctory mnemonic rhythm.

That happened when my mother-in-law recently died. Until her name fit my cadence, it did beneficially cause me to slow down and think more about the people I named. I also long carried first my grandmother’s, then others’, funeral Mass cards in my wallet. But these actions simply seemed like kind things you should do to remember and honor your dead, personal memorials more than religious works, and I didn’t understand them to involve mercy.

Moving back near my hometown soon after Dad died, I sometimes took Mom to the cemetery, probably too often taking more historical than merciful interest in who else was there. I didn’t really visit on my own relatives until she passed away. I still don’t do it enough, and I’m put to shame by my mother, who came prepared—vases, crosses, wreaths, and artificial flowers that she distributed as she walked among the graves of her father and infant sister, other relatives at nearby cemeteries, and eventually her mother, brother, and my dad. I visit more than decorate.

My cemetery visits always include a specific “Eternal Rest” for whomever I’m visiting, usually my parents. Middle age and loss having made me more conscious of and sympathetic toward all mortality, I pray for their souls, although like many children, I trust in their eternal reward. With that confidence, and because this is a work of mercy that neither can the beneficiaries reciprocate nor can we witness its benefits, my spiritual imagination can drift in my direction.

My prayers become more intimate, less rote, and, maybe, deeper—something conversational with Mom and Dad—even if sometimes I can’t help imagining them on a dais above me—judge and jury. I apologize (even though, like a 16-year-old, I still withhold things from them), seek counsel or insight, or beg intercession on behalf of others, such as my kids (who better to ask than their grandparents?) or myself. While I don’t always see tangible results from my redundant prayers, I benefit in a different way.

There is an indulgence for praying for the dead, but that’s not the reward I sense. Although I like to believe I’m not making these visits for my benefit—I am praying for their souls, after all—most of my prayer, no matter who it’s meant for, also avails me, also brings me a blessing. Maybe it’s a smug, internal sense of satisfaction—a good boy doing the right thing—but maybe it’s something from outside, something received unseen, like the dewfall.

A kind of peace settles on me—from meeting an obligation I only obliquely but gradually perceived; from the connection with the deceased, a concrete presence on a common ground, my body where theirs are; and, after a humbling and healthy self-examination, from the asking—or maybe it’s a kind of mercy I’m receiving. However much mercy I offer or generate through my small works may be visited back to me many times. In these works, the mercy isn’t all mine, and my intended recipient isn’t the only beneficiary. And that feeling, however ephemeral, may be a small foretaste of the kingdom prepared by the Father, my inheritance of which is contingent on a fuller practice of mercy—and what a feeling.

Amy-Jill Levine in The Misunderstood Jew provides an interesting angle on how this work is different from the others: “Burying the dead was and remains a major mitzvah (literally, ‘commandment,’ but the term carries the sense of ‘good deed’) in Judaism. It is the only service a person can render to another without any anticipation of reciprocation.” Irreverently perhaps, it’s not hard to imagine Jesus adding to his list in Matthew 25:35, “I was dead, and you buried me.” And his kindly, saintly friends did. Ultimately that’s the model that brought Mom and Grandma to the cemetery all those times—and me too.