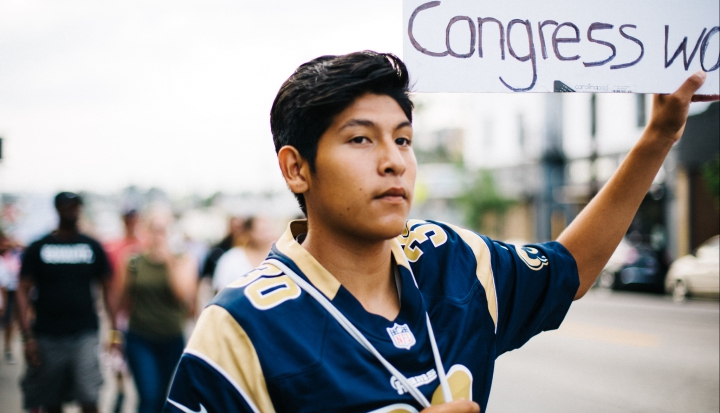 If 2017 was a year of protest—from the Women’s March to the People’s Climate March—what is in store for 2018?

Among those continuing to protest and form movements in 2018 are Catholics. Sister Helen Prejean of New Orleans continues to fight to abolish the death penalty. Nuns on the Bus fight for a number of issues, including income inequality.

Across the country, countless Catholics are getting involved in their local parishes or forming their opinions in colleges. And if we all stand on the shoulders of giants, whose shoulders are today’s Catholic resistance leaders standing on?

The resistance may be taking new forms in the past couple of years, but it is nothing new within the Catholic Church. Just like today, Catholic activists of the past led important movements. Theologians, writers and researchers from across the country weighed in about what each of us can learn from some of the most prominent American Catholic activists of history.

She dedicated her life to helping workers and the poor, which led her to found the Catholic Worker, a newspaper focused on issues of social justice. With Peter Maurin, she created the Catholic Worker movement as well, including houses and farms where people could live in community. Her journey from a Catholic convert to one of the religion’s most prominent social figures is often held up as an example of the power of faith.

While Day’s work expanded to reach more and more people, she stayed committed to the message of the gospel, says Sister Brigid O’Shea Merriman, instructor of theological studies at Lourdes University and author of Searching for Christ: The Spirituality of Dorothy Day (Notre Dame Press).

“Practice of the Works of Mercy, in particular, remained the abiding norms for [Day’s] life and action,” Merriman says. “She worked tirelessly for justice for all persons, with particular attention to the poor in mind, body and spirit.”

Today’s Catholic activist leaders often discuss the importance of creating community for social justice movements. These communities share conversations and support one another in the movement, but Day takes the idea of community a step further. Her work is a reminder that community is about more than sharing information. It is a call to care deeply for one another, as fellow humans, as described in the gospels.

Father Charles Rice, known to some as the “labor priest” of the 1930s, was a staunch advocate for worker rights and social reform. He grew up in a working-class background, ministered to people in Pittsburgh as an adult, and founded St. Joseph’s House of Hospitality for men experiencing homelessness.

Rice used his platform to bring a voice for those without one to all levels of government, something all leaders should do. Rice fought for unions and labor rights alongside other priests, says Kenneth Heineman, professor of history at Angelo State University and author of A Catholic New Deal: Religion and Reform in Depression Pittsburgh (Penn State University Press). Rice created the Catholic Radical Alliance and other union groups to fight for better working conditions and wages.

“The bonds between the working-class rank and file, and their clergy, appeared unbreakable. They were truly one body, one people,” Heineman says, adding that the church needs to return to the kind of advocacy model Rice created. “The Catholic Church, if it is to be a prophetic voice for social justice, must rebuild its ties to working-class Catholics.”

Like Rice, Catholics should be mindful of their group’s message. Making sure those for whom you are advocating have a voice in the movement ensures the group stays on message and united. Like inside the church, the movement should strive to be “one body, one people.”

Elizabeth Ann Seton founded the Sisters of Charity and was the first person born in the United States to be canonized. She began her journey in Catholicism after the death of her husband William in 1803. She moved to Maryland and founded St. Joseph’s Academy and Free School.

The foundress of the Sisters of Charity was known for her devotion and prayer life. Helen A. Jahn, marketing manager for the National Shrine of Saint Elizabeth Ann Seton, points to a passage from Seton’s Collected Writings: Volume I (New City Press) as an important lesson for contemporary leaders: “We must pray literally without ceasing, in every occurrence and employment of our lives … (it) is rather a habit of lifting up the heart to God as in a constant communication with Him.”

Activists should to turn prayer in the same way. Jahn says, “(Prayer) gives us hope that the situation can improve. Plus, prayer is a chance for us to refocus our energies and efforts into a more effective course of action which can ultimately lead to a more positive outcome.”

Seton knew where to turn for guidance. Prayer was a refuge when her work or the world felt overwhelming. Activists today can often feel the same—each day brings a fresh deluge of stories and heartache. Identifying a way to return to center and find peace, like Seton did, strengthens the advocate to face the long haul of social justice work.

Father John Ryan applied his background as a moral theologian to shape social policy and Catholic thinking at the start of the 20th century. As a professor in Minnesota, his students nicknamed him “The Senator” because of his efforts to help create the state’s first minimum-wage law, says Bernard Brady, theology professor at University of St. Thomas and coeditor of Religion and Public Life: The Legacy of Monsignor John A. Ryan (UPA).

Ryan was the first Catholic priest to deliver a presidential benediction in 1937 at the inauguration of President Franklin D. Roosevelt. Ryan and Roosevelt were close, and the priest advised the president on important social reforms related the New Deal.

Even as a young priest, Ryan saw his work as an intellectual as directly tied to creating moral social policy. He focused his attention on worker rights, because he believed these were basic rights that allowed people to thrive in other parts of their lives, Brady says. Moral rights are a person’s basic human rights, regardless of whether a government or person recognizes them.

By mirroring Ryan’s dedication to morality, Catholics can better support causes related to immigration, prison reform or homelessness. Policy conversations about these issues can quickly turn to a conversation about numbers or statistics. Ryan’s work underlines the importance of continually recognizing the moral rights and humanity of the people affected.

Father George Clements: Fight for your dreams, no matter the consequences

Father George Clements continues to be a leading force in Catholic race relations. The retired Chicago priest marched with Martin Luther King Jr. in Selma, Alabama and got Vatican approval to adopt a child in 1981. The adoption was part of the One Church, One Child program to increase the adoption of African American youth, the group of children least likely to be adopted. The local adoption program in Chicago eventually went national.

Clements pushes his congregation, and people around the world, to “dream impossible dreams,” says Matthew Cressler, assistant professor of religious studies at the College of Charleston and author of Authentically Black and Truly Catholic: The Rise of Black Catholicism in the Great Migration (NYU Press).

Clements dreams about a Catholic Church where the poor can receive free medical care and where inner-city black Catholic schools are not forced to close due to budget constraints, Cressler says. Despite the consequences, despite the risks, we must fight for our dreams. That is what Jesus did. Today’s Catholics must do the same. They must pursue their dreams, like Clements, no matter how counter they may run to social norms.

Following Clements’ example, “Dreaming is not enough,” Cressler says. “One must be willing to fight for those dreams, even if they make people uncomfortable and cause controversy. Clements worked to bring his dreams to life.”