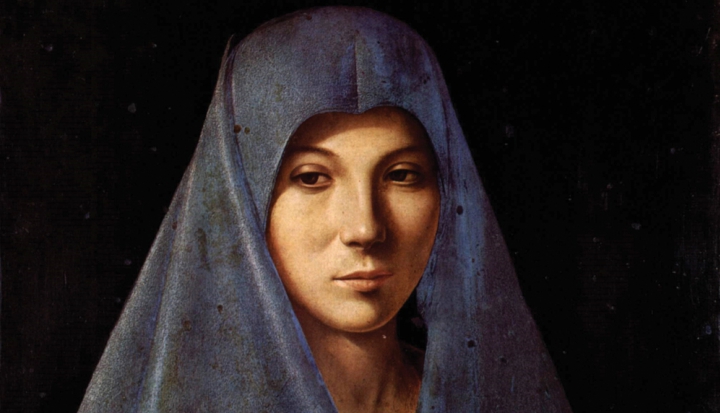 What does it mean to give your heart to a mystery? To fall in love with the silence that wraps around words and gives them context—like diamonds in their proper settings? On the first day of the year, we celebrate Mary’s determination to do that. It’s a countercultural choice.

Words are an ocean we swim through all day long to reach the shore of another night’s oblivion. They shout from periodicals, computer screens, phone texts, shop windows, and billboards. Conversations swirl like dust devils. Even alone with our eyes closed, an endless loop of words dances in our brains. We worry, anticipate, hope. We rehearse injury or replay victory. Talk, talk, talk. There’s precious little space for understanding the implications of anything.

Mary’s leap to maternity was swift. From consent to conception to giving birth, the changes catapulted her into new realities moment by moment. Scarcely was her child in her arms when shepherds arrived with more revelations. To appreciate them, Mary chose the path of contemplation: to keep, ponder, and treasure. What we choose to keep becomes part of us. Mary didn’t keep baubles or grievances. She packed her heart carefully with wonders.

The path of contemplation holds its fascination, especially if silence is far from our days. I’m always the child pressed against the glass, peering wistfully at stillness from outside.

When I was 12, my father was obliged to run an errand at a cloister down the road from our town. I rode along, hungry for sightings of hidden lives bearing untold mysteries. The iron grille, separating the sacred world from the profane one the nuns had renounced, impressed me greatly. Their vow made their home a gentle prison, their sentence a life of prayer and song, all surrounded by an eloquent silence.

I was afraid to get out of the car, half fearful I would be sucked into a vortex of holiness, and just as fearful that I would not.

Dad was uncharacteristically quiet in the car on the way home. I imagined he’d come away as I had: captivated by lives expertly dismissive of the pursuits that composed much of our days. Vanity is the sages’ word, describing our “chasing after wind.” We chase moving currents of desire we can never hope to catch. The nuns were chasing Jesus and had already been caught.

My father broke the silence first. “What a waste of a life!” he declared, pounding the steering wheel. “A waste of life, praying and doing nothing!” Dad was a doer. He measured time in accomplishments. A good hour was hammering nails into walls, scouring a pot to gleaming, accounting for a month of bills, or earning a wage to feed your family. A fundamental dedication to prayer did not compute. It was as senseless to such a man as suicide.

Dad was close to a truth: not suicide, but another kind of death. The monastic movement began in the fourth century as “white martyrdom.” After emperors stopped minting bloody red Christian martyrs, the way to achieve a martyrs’ glory was to die to the world as a volunteer, disappearing from the realm of secular values into the desert or behind a wall.

That day in the car, my father scandalized me in the literal sense. Scandal is rooted in the idea of creating obstacles. Dad’s disparagement of the cloister seemed a denial of what we profess in church. We declare the unseen is what really matters: not this life, but the life of the world to come. What looks like bread and wine, we say, is actually the life of God. What may seem like an empty church is full of real presence. Words shaped in the act of prayer are vital because we say them and God hears them. So why a waste, if a life is delivered over to the unseen, to prayer and prayer alone?

A half-century later I’m at another cloister, kneeling in the public chapel facing into the obscured space beyond the grille where a group of nuns is singing vespers. I hear them. I see little more than an occasional bobbing wave of veils as the women on the other side stand or sit. I might cross the distance in 30 seconds from my side of the grille to theirs, I estimate. I could slip through those wide-enough bars and stand with them before they suspected my arrival.

Yet in honesty I could not cross to their side if I had a lifetime; the distance is vast between their understanding and mine. After all, while they’re wrapped in prayer, I’m plotting an imaginary break-in.

A lifelong faithful Catholic recently confessed to me: “I pray all the time, and it doesn’t seem to do anything.” Hers was an honest statement, frank as a slap and valuable because it’s what we all feel at times, if not all the time. What good does prayer do? Was my father so wrong?

I make a career of church work. I’m immersed in thoughts about holy things—if not often the things themselves. I’ve watched A Nun’s Story enough times to anticipate the dialogue. I’ve read I Leap Over the Wall and Cloister Walk, The Genesee Diary and Atchison Blue. I’ve served a metaphysical sentence with Merton, Thérèse, and Teresa. I’ve done time with the concept of contemplation. I’m captivated by Philippine Duchesne’s legendary stillness at prayer, nights spent motionless on worn knees. Katharine Drexel’s passion for balancing the world’s pain on the fulcrum of eucharistic adoration takes my breath away.

Yet minutes into adoration, I’m wriggling on the kneeler, impatient to get away and do something I can measure the progress of. I’ve become my father. I kneel and dream of washing dishes. First, a mound of sticky plates; now sparkling china, ready for service. I love pragmatic tasks, visible achievements, what I can touch and pronounce well done, or at least, something’s done. My weakness is for the seen, even as I worship the unseen.

What does it mean to give our hearts to a mystery? Love is a mystery. We love for no other reason than because we do. It’s not always rational or defensible. We anger friends over our choice of other friends. We defend our mates against the incredulity of our families. Sometimes you give your heart. Sometimes it’s taken from you. It’s not a matter of what should be, only of what is.

Have those who live on the other side of a grille had their hearts taken? Or did they surrender them freely? Even from 30 seconds beyond the grille, I’m aware of the tug toward liberty that may have once motivated a woman kneeling on this side to contemplate closing the gate on herself, to open another. Where I live, in my apartment, in my head, time is a runaway train. Thirty seconds from here one might find the freedom to become a beloved disciple, resting on the breast of heaven, relaxed and calm, listening to an eternal heartbeat as reliable as air.

Was Mary’s heart already a cloister when the angel first came? Did she rest calmly on heaven’s breast as she gave her assent? When the shepherds came, did Mary imagine how many mysteries the silence of her cloistered heart would one day contain? Did she know that not all of them would be as lovely as the boy sleeping in her arms? If she’d known, would her answer have been the same?