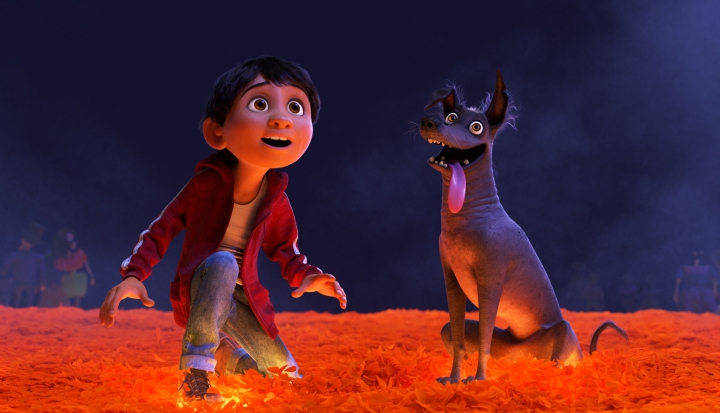 Pixar Animation Studios’ new release Coco tells the story of young musical hopeful, Miguel, whose family bars music from the house after a grandfather abandons the family to follow a musical career generations earlier. The plucky Miguel (voiced by Anthony Gonzalez) has no choice but to sing and strum his guitar quietly in the attic of one of the rooms where his family lives in the bustling town of Santa Cecilia, Mexico. There, alone with his guitar and street dog Dante, Miguel plays along to VCR recordings of mid-century heartthrob Ernesto de la Cruz. De la Cruz’s motto, “Seize Your Moment,” inspires Miguel to steal the famous singer’s guitar from his gravesite to enter a Día de los Muertos contest. At the first strum, however, he travels across time and space to the Land of the Dead, where he is confronted with the playful, larger-than-life ancestors who must give him their blessing to play music before the sun rises and he is trapped there forever.

Coco is a visually stunning film rendered in a rich kaleidoscope of colors, but the real stunner is Pixar’s achievement in making a kid-friendly movie about death. The course of the film occurs over the Mexican holiday of the Day of the Dead, when families remember their ancestors by placing their pictures on an ofrenda, or home altar, along with favorite food and drinks. It is a time to honor those who have died, but also to recognize the brevity of life. While Miguel first fears the skeletal family embracing him when he crosses over, his fear dissipates as the spaces between them fill with memories and stories that knit together a family. For both Miguel and the film’s viewers, the lively skeletons peopling the Land of the Dead are less about death than they are the continuance of life across generations and after death.

Pixar’s calling card is kid fare that opens up conversation about things that are hard to talk about. Similar to the way Up started a conversation about aging and Inside Out gave us language for puberty, Coco gives voice to death and the importance of remembering those who have gone before us. There’s been a lot of talk about Pixar’s decline in recent years. Coco should put those rumors to rest.