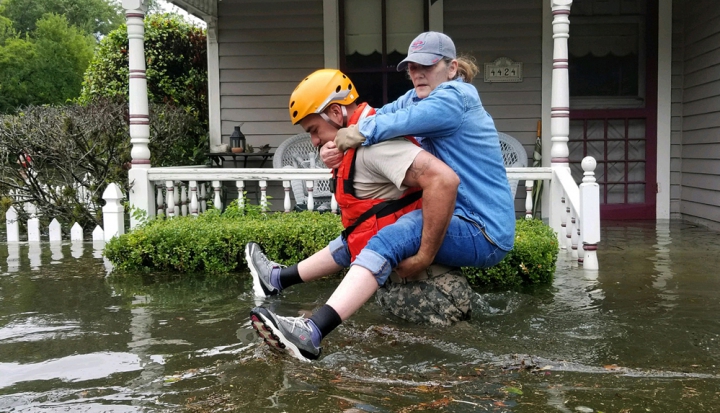 The images of human suffering before nature’s impassive course were riveting, if heartbreaking. After days of torrential rains, thousands were in flight from their homes seeking safety on higher ground. Where was this historic flooding taking place? In late August you had your choice of storm crises to pick from across the globe.

Most American eyes were trained on Hurricane Harvey as it made its drenching run across South Texas and western Louisiana, depositing an unprecedented 50 inches of rain in a matter of days over Houston and other beleaguered Texas communities. But across the globe another rain-soaked disaster was unfolding in India, Nepal, and Bangladesh as two months of historic monsoons saturated floodplains and pushed feet of water across isolated villages and into teeming cities.

At press time the death toll in South Asia had surpassed 1,400, and more than 41 million were left homeless after one of the worst flooding disasters to hit the region in years. The scale may have far surpassed the suffering in the United States, where Harvey claimed more than 60 lives and damaged or destroyed about 100,000 homes. But the experience of the survivors of these torrential rains across the globe was painfully similar: They, too, were driven from homes, wondering how it would be possible to rebuild houses and lives dislocated by nature.

There are a few issues worth contemplating as the flood waters recede in both the United States and Asia. Among them is surely the moral and ethical challenge of deciding who is my neighbor in the aftermath of such tragedy and what claim do victims of natural disasters place on those in the position to help.

Many will be studying these 2017 floods to discern what they teach about the impact of climate change on such inevitable meteorological phenomenon as hurricanes and monsoons. The downpour over Texas was of biblical proportions, but when record-breaking 100- and 500-year floods become regular events, surely mitigating anthropogenic climate change must be integrated into any rational long-term “emergency” response strategy.

These coinciding humanitarian crises in such disparate points of the globe also suggest the importance of rethinking development during a period when urban survivability and sustainability have become acute and interconnected challenges. City planning and development should be as important a component of emergency management as seawalls and levees.

In 1950 about two-thirds of the world’s population lived in rural communities and one-third lived in cities. By 2050 that population distribution will be reversed. Six billion people will occupy less than than 5 percent of the world’s landmass. These urban concentrations will account for about 70 percent of both global energy consumption and greenhouse gas emission. Fixing cities in both the affluent and vulnerable world with resilient housing, storm-buttressed infrastructure, and greenhouse gas-reducing transportation systems will be the existential challenge of the 21st century.

During global emergencies, Americans have been willing to dig a little deeper on behalf of others far away. The slow-moving crisis of city sustainability and survivability will be hard to read as an acute emergency like a famine or an Ebola outbreak. The wealthier parts of the world no doubt will face considerable obstacles of their own in weatherproofing and “sustainabilizing” their own cities. How generous will they be in assisting the poorer corners of the world in their need to do the same?

Pope Francis, in Laudato Si’, challenges us to a global test of creativity and will that he believes can bring the “whole human family together. The Creator does not abandon us; he never forsakes his loving plan or repents of having created us.”

There is still reason to hope and time to prepare.