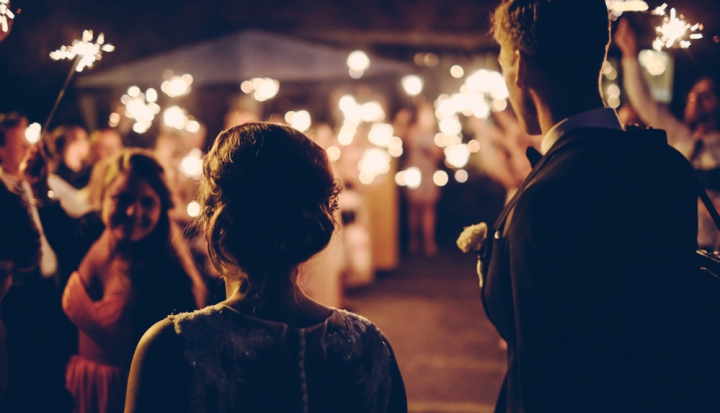 It’s hard not to play favorites, even with scripture. Many churchgoers accept that the Bible is composed of sacred writings from one end to the other. Still, while some of these texts may sound holy to us, others are simply annoying.

Take the parable of the 10 virgins. What’s up with these women? Some translations call them bridesmaids. The Greek word implies sexually inexperienced females. The modern bridesmaid role presumes no such status: The contemporary bridal party is more typically assembled from subsets of people you love and those you owe. So besties from college are in, as are siblings and that one difficult cousin—if only to keep peace in the family.

Weddings are on my mind lately because the next generation of my family is now of the age to tie the knot. Nieces, in particular, are marrying at a dizzying rate, and the venues for these ceremonies are as varied as the women and their chosen mates. This past summer, my niece Amanda was married in a small village in Albania. Why did she choose the poorest country in Europe for her nuptials? Because that’s how she got to the altar: Amanda spent a year as a lay missionary in a nation struggling to emerge from a half-century of diplomatically cloistered communism followed by three decades of a dismally mismanaged democracy. As fate would have it, in the midst of Amanda’s altruism, love bloomed.

From a financial and infrastructure perspective, Albania is damaged goods. But otherwise everyone seems fine. The folks I met there appear happier and a darned sight more tranquil than a lot of middle-class Americans I know. So what if bathroom fixtures are sketchy, transportation is a high-stakes gamble, and employment is an occasional privilege? Families and communities there are knit together fiercely from the skeins of life’s great portals: births, deaths, and weddings. Solidarity is everything in such a culture. The instinctive First World gasp for autonomy seems a rude egocentrism.

From a brief dip into this culture, I can say no Big Fat Greek Wedding could be larger or plumper than the Albanian variety. The week before the wedding we danced in the streets to folk music nightly to the point of exhaustion. When the day arrived I counted no less than four costume changes by the bride between wedding and reception and perhaps eight enticing courses of meat served at the banquet that followed. I’d been forewarned about boiled animal heads and intestines inserted in hidden places. At least one of these dishes was no rumor.

The bridesmaids’ role was of special interest. There were no groomsmen; perhaps partly because the young groom’s friends neither owned nor could afford to rent a suit. Cost was apparently no impediment to the five bridesmaids, whose purpose was sumptuously decorative. Think three full costume changes of sparkling rental garments, plus footwear, jewelry, elaborate hair arrangements, lavish nails, and false eyelashes. We Americans had to manually close our jaws each time we learned what was expected, but we dutifully smothered any native opposition and surrendered to the process.

Many accessories essential to the bridal party could be rented, shared, or borrowed. But certain things couldn’t be bought, like knowledge of cultural norms. In one circumstance, it was considered offensive to even offer to pick up the check. In the next, one was expected to toss money into a candy dish or onto the dance floor. How to know when to pull out a wallet or to keep it tucked away? Whether to kiss the host’s right cheek before the left, when to touch or not touch a dance partner?

Since insider expectations can’t be bought or borrowed, the wise outsider listens more than speaks and imitates more than initiates. I must confess we Americans did rather a lot of talking, stereotypically raising our voices for the dubious benefit of those who didn’t know English. The parable of the virgins reminds us of one more thing that can’t be borrowed in the context of a wedding, or anywhere, frankly, and that’s character. When it comes to character, you positively have to supply your own.

The dearth of character is represented plainly in the role played by the five foolish virgins in the gospel story. Consider their situation. These young females had one main responsibility: to keep vigil in the dark so as to light the path for the groom’s entrance to the wedding feast. If this is your singular occupation in a wedding party, for the love of God, bring enough oil for your lamp! But these fair maidens didn’t.

A wedding feast, whether celebrated in Albania or Albany or first century Palestine, is meant as the summation of life’s hopes for the couple. We’re saying “may you be happy and well fed, surrounded by love of family and communal support.” Jesus compares this summary of hope to the realm of God. Our whole longing is in the direction of that safe, secure, and loving union—just as a lover longs for the unending embrace of the beloved. Our life in this world groans in anticipation of an unending feast of joy! One might say God’s reign is behind every decision a thoughtful believer makes: why we purchased the shoes, rented the dress, and did our hair, so to speak. (Guys, please make your own translations here.) If you’re not going to the wedding feast, why bother with the trappings?

As the parable goes, 5 out of 10 lamp holders get the most nonnegotiable aspect of their role wrong. Maybe they attended fastidiously to the superficial aspects of their preparation: glued on the lashes, added rhinestones to their nails. But they skimped on the all-important oil—and now they won’t be at the feast at all. Instead they’ll be clomping off into the dark in their gold lamé gladiator sandals, stomachs growling to the strains of far-off music to which they will not be invited to dance.

What does the lamp oil represent? Unlike an allegory, which relies on a one-to-one correspondence of symbols and their meanings, a parable is fluid in its significance. Lamp oil could be virtue, conviction, integrity, wisdom, or courage, depending on the quality the parable’s audience is in need of most. Whatever facet of character is necessary, 5 out of 10 bridesmaids run out of it in short order. They try to sponge off the character of their better-prepared companions—but alas, they can’t. Which is to say, none of us can. No one can be good in our stead. No one can be just or kind or holy or forgiving for us. There’s simply no cover for character. We bring our own to the table, and if it’s insufficient, we can’t buy or sweet-talk our way out of the shortfall.

I think of my family’s recent cross-cultural adventure, how we exchanged amusing critiques of everything that seemed strange to us in a land not our own. I’m sure plenty of critiques went the other way too, in a language we couldn’t understand, about how peculiar or bizarre we seemed. What we all got right, though, was the desire to celebrate these two young people we love, making room in our hearts for a family more expansive than any of us had imagined. We brought all the oil we could muster to this novel situation, to light this couple’s path into the future. Holding our lamps high and shining them brightly is the only way any of us can get where we all hope to go.