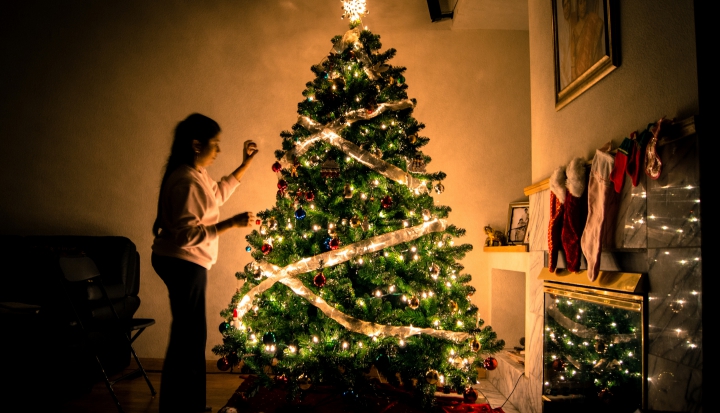 In the middle of June, on a bright, hot, green, snow-is-the-furthest-thing-from-my-mind day, my middle daughter looked across the breakfast table and asked, “Mommy, when is it going to be Advent?”

She was quite serious; Easter and Pentecost seemed a long time away. Surely it was about time Advent rolled around again. Or at least so she hoped. She was, to say the least, disappointed when I explained she had an entire summer and fall to wait before Advent peered over the horizon.

I think my children like Advent almost better than Christmas, even though we celebrate Christmas for 12 long days. Of course, Christmas has the presents and the goodies, the beautiful Mass and the tree, but there is something in the anticipation of the event that is lacking in the event itself.

Christmas is almost characterized at times by the very lack of what it seems to promise. Presents are opened, then discarded; quarrels break out, depression descends. Even in the best and rarest of Christmas moments, when people are happiest, most peaceful, most in tune with God, that sense of something missing persists; if not something missing in terms of preparation, devotion, or festivity, at least a sense of something yet to be added, yet to be achieved.

Advent, on the other hand, is filled with the very magic which is so often absent on Christmas Day. The feel of Advent is one of preparation, of anticipation of a great event about to happen. Despite the annual Christmas letdown, not an Advent goes by that the wreaths are not put up again, the cards sent, the tree trimmed.

When I was a child, we used to sing an Advent song by Eleanor Farjeon that evokes this anticipation very well:

People look east, the time is near
For the crowning of the year.
Make your house fair as ye are able,
Trim the hearth and set the table.
People look east and sing today.
Love the Guest is on the way!

People look east, the time is near! What excitement, what expectation sings in those few words. Who would not thrill at the idea of making ready for the “crowning of the year”? Look around you come December, and see how everyone sets about it with strange enthusiasm. Thirty, 40, 50 Christmases have come and gone, each in its own way a small disappointment, and yet again this year your friends and family make their houses fair, trim the hearth and set the table, and hope. What are they all hoping for?

When I was a child I thought it just might come in a box, a cardboard box wrapped in colored papers, and for a time, temporarily, I was satisfied. But sooner or later it dawned on me (and now I see it dawn on my own youngsters) that getting what I thought I wanted was never enough. After this discovery, it’s easy to slide into disillusion: Nothing, including Christmas, is all it’s cracked up to be. Forget about hoping for your heart’s desire.

But the strange renewal of this hope each December has given me a new discovery: To be a Christian is to hope. The Christian faith, more than any other, is founded on hope: Christians hope to see the world transformed, to see a happy ending to the often sad tale of humankind. Believers know that they won’t see the fulfillment of this hope in their lifetime, just as they know that Christmas may not live up to their expectations. But Advent is the season of the hope itself. The waiting, the longing, the dreaming is the stuff the Christian life is made of—anticipating perfect joy even if we cannot taste it yet.

Unfortunately, as any parent knows, the anticipation of Advent can all too easily become worry, hurry, and frantic activity. What seems to interfere most in devotions at any season of the year is “daily life,” and daily Advent life is 10 times more distracting than ordinary daily life. That Advent booklet is all very good; it has some lovely ideas that no doubt would be helpful—if only I would remember to get it out, if there were only some time left over after the cleaning, the shopping, and the running around to activities.

The only solution, as domestic saints all knew, from Zita to Brother Lawrence, is to make the necessary activities of daily life serve their turn as spiritual expressions. The chores and shopping and decorating can become the outward signs of Advent’s expectations; they can enrich rather than distract from the family spiritual life.

“Trimming the hearth,” for example, is something every household does in one way or another. Christian families can let it remind them to deck the halls of their own interior lives as brightly as their mantelpieces. The more concrete this is to the entire family, the better. Some families make it a rule that for every unselfish, kindly, or forbearing act, each member of the family puts one ornament on the tree. In addition to avoiding the mad scramble to erect, light, and decorate the tree in one night, this custom allows the Christmas tree to grow daily in beauty as each family member grows a little in spirit.

And think of the Christmas cleaning—or better yet, don’t think of it, for your peace of mind. What a discouraging thing cleaning can be at any time of the year, as discouraging as all that bare earth in winter time, furrows without seeds. It seems as if no gain can hold its ground against the general tendency of the world towards clutter—of the spiritual nature as well as the physical.

My goddaughter once said to me, “But why should I confess something when I know I’m going to go right out and do the same thing again tomorrow?” She didn’t mean on purpose; she meant by accident, in anger, or out of general human weakness. It was a very good question. She didn’t want to do wrong, but she knew she was going to anyway.

Under those circumstances, going to Confession is about as encouraging as keeping house. Against this stark, hopeless view of the universe rises the miracle of the winter rose “blooming forth from an ancient shoot.” This is the age-old promise that all human struggle, even against so insignificant and overwhelming a foe as dust, is not in vain. Neither is the battle against everyday, petty, and sometimes no-so-petty sins.

I look at regular Confession as a form of spiritual housecleaning. Of course the place will get dirty again, but it doesn’t hurt to straighten it up once in a while—especially when the alternative is knee-deep confusion. As much as it may appear that you’re getting nowhere, in time (10 or 20 years, say) the difference shows. This is, unfortunately, more than can be said for a house.

The flame of just one candle at Advent brings to mind Christ, the light of the world. As Christian symbols go, candles are definitely in the top 10. Something about the beauty, the light, the frailty of a candle calls forth a natural sense of awe—and never more so than during Advent rituals. Many families would like to add some sort of ritual to their Advent preparation, but distractions get in the way. Others find that the attempt at family prayer is too complex, formal, or just plain embarrassing.

When it comes to remembering a custom amid the flurry of shopping and baking, children can be particularly helpful. Their minds are not cluttered with the juggling of dates, or the problems of what to get Uncle Ed. They can be counted on to remind everyone 20 times a day not to forget the Advent calendar. They will shout if you start the meal before lighting the Advent wreath (if only because it’s their turn to light it). They will remember when to put up the crèche, especially if they’re put in charge of the operation. Older children especially will often take charge of a favorite custom, orchestrating and supervising the entire affair and leaving their parents free from at least one worry.

Cynicism or mocking of traditions during the teen years may often have its root in a missing sense of belonging or ownership. Sometimes parents can be come overzealous about making sure a celebration goes the way they want it to, with the result that children feel called upon to play a rigid part, or to be merely spectators. I recall when I was a teenager, I completely took over the decorating of the Christmas tree, passing on all my father’s injunctions about the “proper” way to hang tinsel or to get the tree to stand straight. My father was generous enough (or tired enough) to yield this place in the limelight and retire to the reading chair, there to rest his feet and make general comments on the proceedings.

Introducing a new ritual, such as an Advent wreath, can be a sticky affair. Children will often goof around during a solemn moment because an attempt at solemnity embarrasses them, or because the drama is overplayed. It is better for everyone’s sake to keep the rituals simple and short. Treat the event with a matter-of-fact reverence. Nothing is more certain to cause children discomfort than an apologetic “I know this is going to seem weird” attitude from the parents. If a family has never had a regular Advent ritual, everyone may feel awkward and even resistant to the idea. It helps to discuss your reasons for starting the observance: “I know we’ve never done this before, but I think we ought to remember Advent in a special way, to help us get spiritually ready for Christmas.”

Our Advent ritual is limited to a simple antiphon and response before lighting the candles: “Our King and Savior draweth night; O come let us adore him.” Our whole family has become used to this, and we usually follow it with a brief discussion of what each new candle stands for as the weeks of Advent progress. We used to be more elaborate, but we found that this simple ceremony works best for our family.

In fact, I’m always trying to simplify my life throughout the weeks of Advent—it’s the only way I survive the season. I never do anything I don’t have to or want to do, and I do everything with as little effort as possible.

This may sound sinfully lazy, but it’s the only way that I leave a little space for my spirit. School plays and Christmas parties are out, and I entertain or visit only people I will enjoy spending time with. I know the kids will put on a halfway decent performance whether I’m there or not, and the plays are so awful that I have yet to enjoy one.

Other parents, of course, are different, and there will always be enough of them to fill up the school cafeteria. For them as well as for me, the principle remains the same: Be selective. Parents who spend all of December writing cards and adding gifts to their lists and going to parties will have no spare moments to spend with their children, preparing to celebrate the Savior’s birth.

The best Advent observance of all will always leave enough of that precious time to stand by the window and look at the stars and do a little of that which the Christian life is all about—hoping.

This article was originally published in the December 1983 issue of U.S. Catholic.