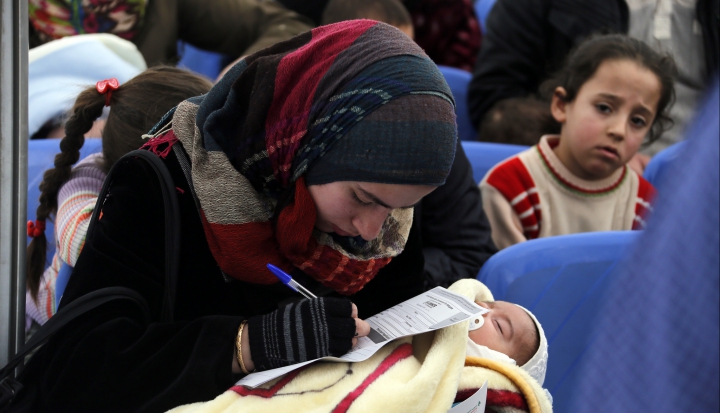 Folks are asking the question: Should we count our Lord among the ranks of refugees? Did the Holy Family qualify for refugee status, given they were forced to leave Israel and lay low in Egypt to avoid King Herod’s dreadful war on baby boys?

Matthew alone recounts the flight to Egypt, which, if historical, would add Jesus, Mary, and Joseph to the epic list of biblical refugees. And Matthew was less interested in reporting on Jesus’ infancy and more focused on creating a time capsule of Hebrew history. By narrating the Christmas stories from Joseph’s point of view (Luke prefers Mary’s), Matthew mirrors in this Joseph the memory of an earlier one: Jacob’s son.

Joseph of Genesis, too, was forced into Egypt, followed by all of his brothers—a migration that eventually led to the whole nation’s enslavement. And, like Herod, Egypt’s Pharaoh ordered the slaughter of male Hebrew infants to maintain control over a discontented and burgeoning population.

Moses, the boy who escaped infanticide, would eventually lead Israel in a triumphant liberation march from Egypt. By referencing Israel’s signature saving story in eight neat sentences, Matthew announces a new Exodus: Jesus will be an even greater liberator of his people.

Outside this gospel, history bears no evidence of Herod’s massacre of infants. However, the litany of evil attached to Herod’s name is horrible enough to include such an action. Scholars suggest the king might have killed 20 babies to make his point, terrifying the populace sufficiently to quell any proposition of a rival king. The death of a few dozen babies rarely makes history.

Israelites in peril made their way to Egypt many times in the biblical record. In a region not generally friendly to migrating folk, Egypt provided sure access to food, water, and the possibility of free trade. If Joseph did determine his family was in danger, Egypt would have been a natural choice for a safe haven.

The idea that the Holy Family once found itself as migrants or even refugees may awaken the compassion of believers who need a reason to consider the humane treatment of undocumented people currently within our borders. If this special family makes the case, how about hundreds more? Scripture is filled end-to-end with wandering, landless people who are beloved of God yet at the mercy of every stranger’s kindness. To name a few: Adam and Eve, Cain, Abraham and Sarah, Hagar and Ishmael, Jacob and his wives and children, Moses and the entire population of the Exodus, Naomi and Ruth, David, Elijah, Amos, Esther, Paul, and all the apostles.

In fact, we might consider most biblical actors as undocumented foreigners since everyone who entered the land once known as Canaan lacked the correct papers and was absolutely not welcome. Should we close our doors to refugees and migrants today? Who knows how many of them might prove to be vital to God’s unfolding story of grace?