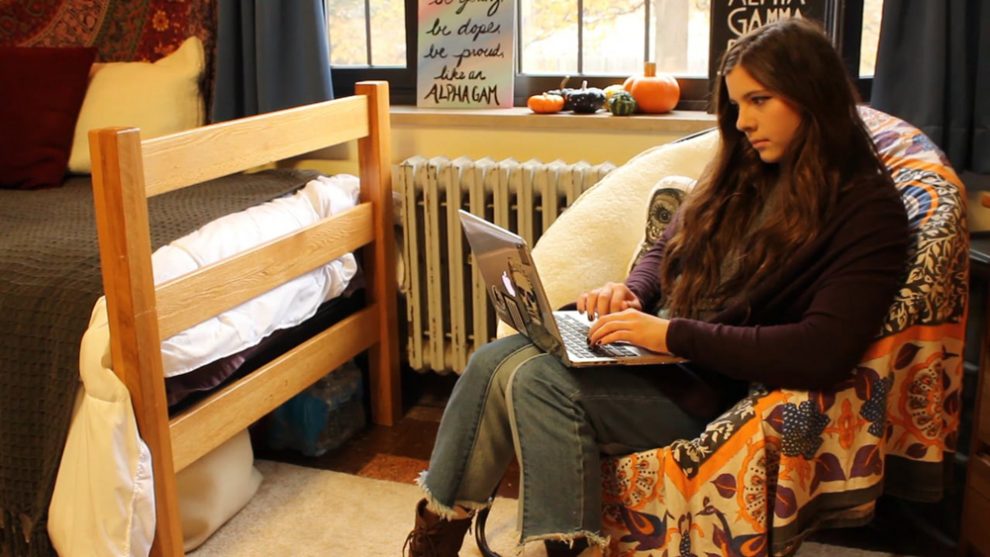 I learned more the time my sophomore floor mates and I tried pulling an all-nighter than I did in an entire semester of Statistics 101.

With all due respect to Professor Su, it was the comradery, more than the calculations, that added up.

It was your classic end-of-the-semester crunch. Chinese takeout boxes were strewn about the glorified closet we called a “lounge.” The number of cans of Red Bull seemed nearly equal to the page count of Gina’s biology textbook. We were 19 years old. The world was big. Looming deadlines didn’t seem nearly as daunting at 1:30 a.m. We took our studies seriously, but we also knew being in school was about more than academic success.

I benefited greatly from learning—and living—in simple community during college. It was the first time any of us had bunked outside our childhood rooms. Questions like, “How do I solve a quadratic formula?” were intermixed with, “How do I make it through this homesickness?” and “Do I want to go to church now that my parents aren’t making me go?” It’s hard to sift through these questions alone. From broken hearts to broken toilets, the ladies of Carpenter Tower 12 learned the pangs of “adulting” the best way—together.

Today some students are trading simple life together for luxury living alone or with a select group of friends. This trend has me concerned for students at Catholic universities in particular.

Luxury suites are sprouting up on campuses across the country. These spacious apartments are often all-inclusive, boasting state-of-the-art bathrooms, bedrooms, and kitchens decked out with top-of-the-line appliances. Some luxury apartments are single-occupant. Others lure packs of three or four friends. Landmark Properties, a major student housing developer in the United States, now manages more than 8,000 units geared toward students in 19 states. Catholic universities like St. Mary’s in Texas and Marquette University in Wisconsin are in the middle of multimillion dollar residence building projects. The market varies. Some buildings are university-owned. Others are privately owned but located just steps from campus bounds. Some are constructed because universities need more bed space for their rising student populations. Others sprout up from companies—or universities—looking to make a profit on students whose families have deep pockets.

Not all new residence halls include luxury suites. Some schools ditch the 1950s carpet and leaky sinks but keep the simple community-living model. And, to their credit, many of these new residence buildings are also trying to be more eco-friendly. Marquette, for instance, is prioritizing sustainability in its $96-million residence hall development project. Each of the new 325-student dormitories will be built under Leadership in Energy and Environmental Design certification standards. Pope Francis asked for such efforts in his encyclical focusing on care of the environment, Laudato Si’ (On Care for our Common Home).

But beyond the possible modernizing and environmental benefits, luxury living in and around Catholic universities has me concerned. It promotes an individualistic lifestyle in which students conceivably have all they need in one space. If I can get comfy studying in my own living room, why would I cram into a glorified closet to study? My dorm room was so sparse that I was always eager to go to the community lounge, even if it was only slightly bigger. Inevitably, a floor mate would walk past our shared public space and I’d get the chance to talk with someone outside my normal friend group. The all-inclusive nature of luxury living makes students more likely to stay in their suites and miss out on community time or all-night marathons.

Additionally, many luxury apartment buildings boast of amenities such as movie theaters, walk-in closets, rooftop pools, and private bathrooms. At the risk of sounding like an old fogey, what 19-year-old needs all that? If you’ve been listening to Pope Francis at all lately, the recent Best College Value list of the 30 most luxurious student housing buildings ought to make you cringe. It’s one thing for large public universities to enter into this consumerist demand for wealth and privatization. A Catholic university ought to hold itself and its students to different standards. The Catholic faith values living in community and simple living.

Scripture has plenty to say on both fronts. We are created as many parts of one body, St. Paul writes (1 Cor. 12:12). Through baptism, Christians come to know the world through the lens of community. We should rely on each other and be there to support one another. This ought to mean something when students consider where to live. I know I wouldn’t have made it through a tough relationship break without my floor mates, who were ready with Kleenex and listening ears even into the wee hours of the night. It’s one thing to have friends to text. It’s another to share space with other “members of the body.” The convenience of dorm living cannot be beat. Even the psalmist affirms in Psalm 133, “How very good and pleasant it is when kindred live together in unity!” (133:1). Community is at the heart of Christian life.

Christian tradition is also clear about the way in which people should live together—and it doesn’t include fine dining on the first floor. People with little have a special place in Jesus’ heart. In Luke’s version of the Beatitudes, Jesus exults the poor and then minces no words to their wealthy counterparts. “Woe to you who are rich,” the Son of God declares (Luke 6:24). That line would have me thinking twice about signing that luxury lease. When a rich young man approaches Jesus for advice in Matthew’s gospel, Jesus is clear his followers must give up their possessions in order to enter the kingdom of God. Jesus then offers this blunt reality: “It is easier for a camel to go through the eye of a needle than for someone who is rich to enter the kingdom of God” (Matt. 19:24). If they took this message seriously, would Catholic universities be spending millions of dollars on luxurious amenities to encourage wealthy living?

Christian living, instead, should be simple. Jesus tells his disciples, “Take nothing for your journey, no staff, nor bag, nor bread, nor money—not even an extra tunic” (Luke 9:3). Those first disciples were not touting extra closet space. In fact, Catholic teaching takes simple living a step further. In Acts of the Apostles, Luke describes a community in which all possessions are held in common (4:32). Everyone has what they need, nothing more or less. In this model, it makes sense for Catholic university students to hold their living space in common, too. We’re not asking students to share toothbrushes here. But toilets? Absolutely.

Competition is fierce in higher education. Catholic universities should keep buildings up to date. No one wants to pay rent for a room with a coffee-stained carpet. Will Catholic universities lose potential students if they’re not boasting the latest and greatest housing options? Maybe. But there are plenty of other ways to attract students: Be intentional about cultivating community in the residence halls. Give the resident assistants adequate funding to host social events on the floor. Employ a professional hall minister who lives in the dorm and is available to address students’ spiritual needs. Designate a chapel space in each hall where students can escape for peace and prayer. Make the hall feel like home. We all know it’s not the designer couches that make a place feel homey. It’s the people.

Many Catholic universities have residency requirements for exactly this reason. I work at St. John’s University, a Benedictine school in which 85 percent of students live on campus. The Residence Life office says the residency requirement gives students the benefit of “connecting with others, developing a balanced lifestyle, using campus facilities and continuing the reflective exploration of their own faith.” Living together enhances learning together. Simple living respects the gospel call that it’s service, not stuff, that matters in God’s kingdom.