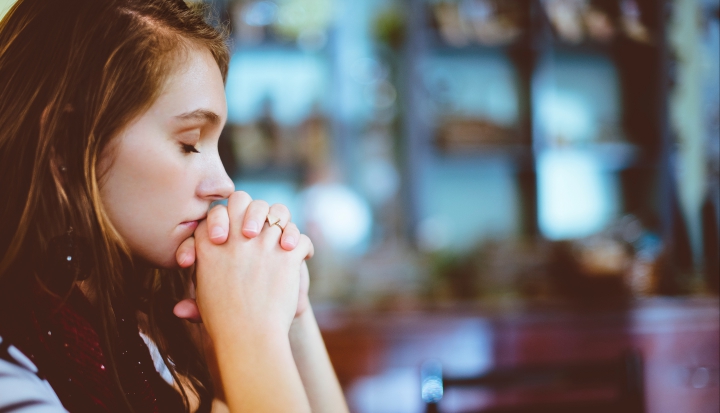 At night when I exhaustedly flop down on my son’s bed to say evening prayers with him, I inevitably have to curb his tendency to race through the words. The problem is when I slow him down, he cannot remember what comes next. When he returns to his rushing slur, his prayers become an inarticulate jumble. I am fairly certain he could not isolate and restate the phrase “fruit of thy womb, Jesus” if he were asked. And while focusing on the individual words within a prayer is not always the point, it’s remarkable what we can learn when we do.

When I slow down and pay attention to the nuances of a prayer’s language, particularly the Embolism (the priest’s short petition after the Lord’s Prayer), what always jumps out at me is the phrase “protect us from all anxiety.” The phrasing that precludes it is a no-brainer. “Keep us free from all sin” makes sense. But I’ve puzzled over the anxiety phrasing for years because it is such a specific and narrow prayer request. Why anxiety? Why not protect us from all sorrow? From all depression? From all obsessive compulsive behaviors that steal our happiness? Why anxiety in particular?

And then in the sort of cruel way life sometimes answers questions, suddenly everyone I knew was struggling with anxiety. It started with my mom whose fight with lung disease brought her mortality into sharp, anxiety-producing focus. Next, a friend’s daughter whose anxiety causes her to vomit uncontrollably throughout the day. Then another friend whose anxiety nearly wrecked her marriage. But it wasn’t until it landed on my doorstep that I finally understood the exceptional nature of anxiety.

All of my pregnancies belong under the category “Things Difficult to Survive” thanks to the condition Hyperemesis Gravidarum (HG) that affected me those many months. In brief, HG is severe and debilitating nausea and vomiting that frequently results in the need for a feeding tube and extended hospital stays. My last pregnancy was not planned and I was not mentally prepared for the months of suffering that define an HG pregnancy: the needles, the isolation, the whole living life as a terminal patient for at least eight months thing. Every part of me fought the fact of the sickness. I could not accept it. I would not endure it again except I did not have a choice. It came and with it, a new symptom: the mental crush of anxiety, a rabid squirrel racing through the dark tunnels of my mind that never rested, never eased up, never let me have a moment of peace.

The anxiety reached its peak months into the sickness one night in a hospital bed. I can scarcely remember the details of the night. The rabid squirrel was in a frenzy. I gripped the hospital bed rails. My angelically patient doctor sat at my side holding one free hand while the Haldol (which didn’t work) and the Ativan (which did) were administered. “What if they don’t work? They’re not going to work.” I was sure of it. My doctor had more faith in them. She shushed me in a comforting way. The room was darkened and we waited for the convulsive anxiety to finally drain out of me with the help of high powered chemicals. Behind my closed eyes, I was finally able to drift away from it. Slowly, the squirrel’s pace slackened, the idea of him changed and drug-induced descending fractal patterns replaced him so that I could sleep for the first time in days.

The darkness of that night, the intensity of helplessness, the overwhelming feeling of being completely out of control, it all still haunts me. The power of that anxiety, its utter rule over me made life unlivable. The only kind of prayer I was capable of during that time was dearGodpleasehelpme prayer. Distance from that period of my life has not yet lessened its impact. I cannot replay that night the way a writer is called to do in a vivid way. For now, it has to remain behind the shadow of the dimly lit room and the muted red of closed eyelids.

Months later with the terror of my particular pregnancies behind me, I stand in church and I recite the Lord’s Prayer along with the rest of the congregation. When the priest says those words, that specific request to keep us free from all anxiety, I can’t help but shudder a little now with my new understanding of the consuming nature of anxiety, of its ability to steal everything from us in a way that no other mental tribulation is quite capable. I grip my husband’s and children’s hands a bit tighter and narrowing my eyes, cut a look over to my son that says “slow down.” Maybe if he gives the prayer more thought, more weight, he’ll escape the anxiety that awaits him in life. Probably not, but I can always hope and pray for the best.