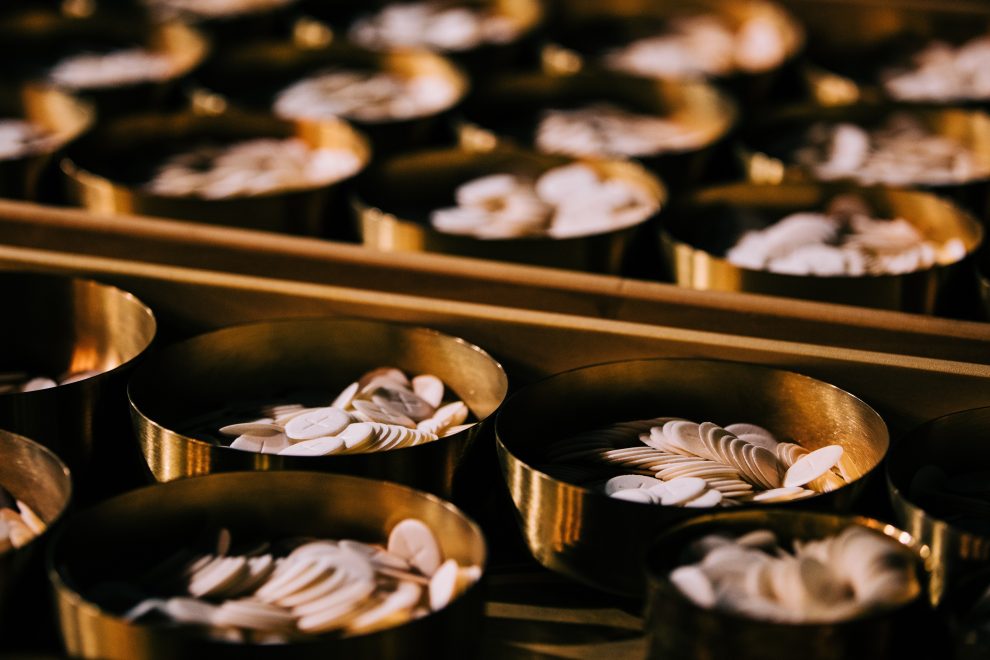 At the center of our celebration are the simple elements of bread and wine.

The wine used for Mass is much the same as any wine we might serve at our own tables. Any unspoiled natural wine made only of grapes may be used. But the bread that we use for Mass is usually the flat, round wafers we call hosts. (The word host comes from the Latin hostia, which means victim, one to be sacrificed.)

For many centuries, hosts were made primarily in monasteries. Even today, several monastic communities of women religious support themselves by baking hosts and selling them directly to parishes. There are also commercial companies that make hosts and sell them directly to parishes and through religious goods stores. Some parishes have bakers whose ministry it is to make the bread for the Eucharist.

No matter who makes the bread, the requirements are the same. In the Roman Catholic Church, bread for the Eucharist must be made of wheat, be unleavened, and be recently made and unspoiled, according to the General Instruction of the Roman Missal and canon law. Other than water, nothing other than wheat flour (white or whole wheat) is to be used in making the eucharistic bread.

The familiar thin, round hosts are made by mixing flour and water to make a batter. The batter is poured onto a hot griddle with upper and lower plates, similar to a waffle iron. The batter cooks for a short time between the plates, which may be engraved with crosses or other symbols to create embossed hosts. The sheets of bread that come out of the griddle are allowed to cool. After they have cooled, they are quite delicate. They are stacked and placed in a humidifier for several hours so they become less brittle. They can then be cut into individual hosts without shattering. This is usually done with a machine that somewhat resembles a paper hole puncher. The resulting hosts are then dried and packaged for shipping.

Parish bakers usually make flat loaves with a more bread-like consistency. This is particularly difficult given that they can only use flour and water, but many have mastered the technique, often after a bit of trial and error.

The church requires unleavened bread in remembrance of the Last Supper, where the first Eucharist was celebrated at a Passover, according to the Gospels of Matthew, Mark, and Luke. The bread for Passover is always unleavened, in memory of the hurriedly baked bread the Israelites baked before they left Egypt. Orthodox Christian Churches and some Eastern Catholic Churches use leavened bread as a symbol of the risen Christ. The bread is called prosphorá, which means offering.

Photo by Grant Whitty on Unsplash