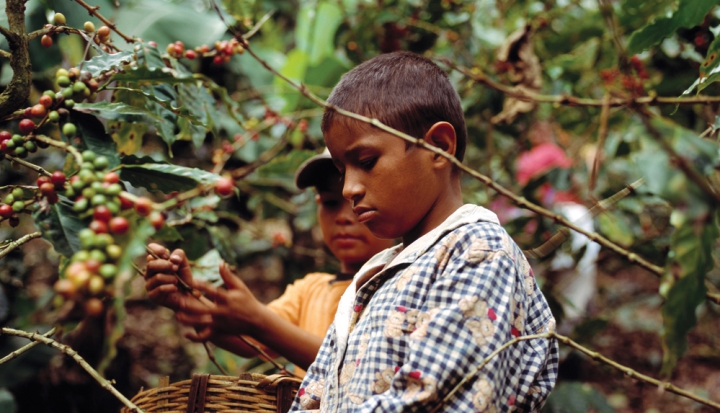 Strolling your supermarket aisles, you have one eye on your family’s food needs for the week and another on whatever bargains you may be able to pull off the shelf. You can be forgiven if, coupons in hand, you’re not worrying about avoiding food that includes hidden ingredients like, well, slavery. Sadly, in today’s interconnected food marketplace, compelled or uncompensated labor—even child slavery—provides a reliable competitive edge for many food exporters. And many First World importers, commodity wholesalers, processors, and marketers are wittingly or unwittingly capitalizing on this suffering.

Deeply obscured at the far reaches of growing, harvesting, or processing supply lines, the ancient scourge of slavery is alive and well in the modern marketplace: cocoa harvested by child slaves in West Africa finds its way into chocolate bars; fish and shrimp flash-frozen and imported out of Thailand or Indonesia is likely to have been processed by slaves; even produce grown in the United States has been tainted by forced labor, as vulnerable undocumented laborers on U.S. farms are held as virtual prisoners, cheated out of wages, or robbed by growers or traffickers. Florida’s Coalition of Immokalee Workers (CIW), a worker-based human rights organization, estimates that approximately 5 percent of all farm workers in the United States are victims of forced labor.

The International Labor Organization (ILO) reports that about 3.5 million of the almost 21 million people worldwide enduring forced labor work in agriculture, and labor has played a role in the supply chains of food and drinks we commonly consume. According to the ILO, forced labor in agriculture is a major problem in Africa and the Asia-Pacific region. The group also reports more than 360,000 people are forced to work on farms in Latin America and about 530,000 do so in the United States, Europe, and other developed economies. Food companies generate as much as $9 billion annually in profit thanks to forced labor, reports the ILO.

In 2016 the Associated Press earned a Pulitzer Prize, its first for public service, for an ­investigation of the fishing industry in Southeast Asia that traced seafood caught or processed by slave labor to supermarkets and pet food providers across the United States. It led to the liberation of more than 2,000 slaves and helped persuade the Obama administration to beef up antislavery measures in U.S. import laws.

Major U.S. and international food conglomerates are aware of the problem and claim to be finding ways to confront it, but their progress has been unacceptably slow. Tracking down labor conditions to the terminal degree of separation among thousands of suppliers is surely no easy task, but where there is a corporate will, including a will to make the necessary investigatory investments, there is a way ahead to a world free from human bondage.

Pope Francis has repeatedly pressed the global community for more progress on ending human trafficking and slavery, which he has called a “plague on humanity.” Under his leadership the church has been at the forefront of multilateral antislavery and human trafficking efforts. Church leaders lobbied hard for the United Nations to include “immediate and effective measures to eradicate forced labor [and] end modern slavery and human tracking” among its 2015 Sustainable Development Goals.

Catholics can join Pope Francis’ efforts to end the blight of slavery by learning more about the problem through efforts like KnowingTheChain.org, antislavery.org, or the CIW’s Fair Food Program. KnowingTheChain.org’s recent ranking of global food conglomerates offers qualified support to efforts at Unilever, Coca-Cola, and Nestlé to remove forced labor from their supply chains; other well-known names like Hershey, ConAgra, ADM, Kraft-Heinz, and Tyson Foods got solid “needs improvements.”

With millions of lives on the line, eradicating modern slavery is just one more important reason to watch what you eat.­