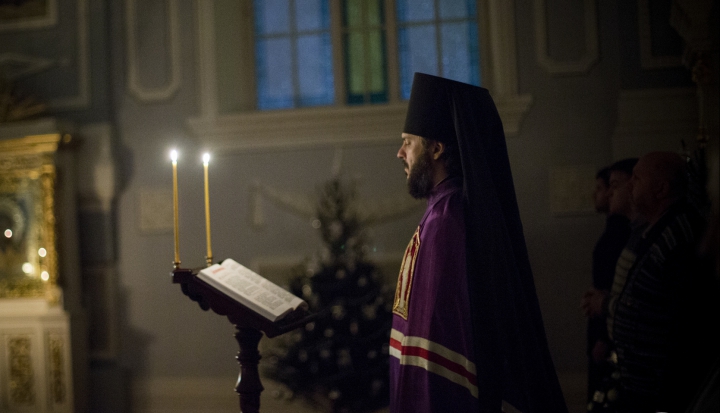 I attended evening prayer for the first time at a monastery in upstate New York. I was immediately drawn to it because the service correlates perfectly with the poignancy of dusk—that hour of the day that imbues the most routine action with a sense of subtle mystery. Ritualizing this transitional time instilled in me peace and refocused my energies for the evening ahead. It was a practice I longed to continue on a more regular basis from my home in Brooklyn.

For me, the Catholic liturgical cycle can easily become relegated to Mass on Sunday, with little thought given to the time in between. As a modern Catholic, it is easy to lose the diurnal rhythms of prayer, the ancient patterns of thanking God for the sunrise and imploring peace while we sleep that mark the motions of the soul over the course of the day. I wanted to relearn some of these rhythms and regain some of the ebb and flow of sacred time.

Vespers traces its roots to some of the oldest Jewish and Christian rituals. Old Testament passages instruct the faithful to greet the evening by lighting lamps and offering incense: “When Aaron sets up the lamps in the evening, he shall offer it, a regular incense offering before the Lord” (Exodus 30:8). Christians maintained this practice in the early days of the church, using the lamp as a reminder of Christ, the light of the world. Over time, the service was codified with the inclusion of specific prayers, psalms, and hymns. It became a daily rite for Christians in places of public worship and a means of sanctifying the evening hours, in Saint Basil’s words, “with something better than silence.”

While some Catholic, Anglican, and Episcopal parishes include vespers services in their weekly schedules, outside of monasteries it has largely fallen to Orthodox Christians to uphold the tradition. When I began my search for vespers services, I discovered that many Orthodox communities throughout New York City held weekly vespers services, usually on Saturday evenings. After undertaking a series of “urban pilgrimages” to various churches, I eventually gravitated toward two communities close to where I was living—one Coptic, the other Greek. Their warmth and hospitality made it easy for me to return again and again to pray vespers. Participating in a shared thanksgiving became a staple of my spiritual life. One of the first things I did upon moving to Connecticut in 2015 was contact a Russian Orthodox community nearby to inquire about their vespers schedule.

Differences in Orthodox rites mean that not all vespers services are exactly the same. However, they do share many common structural elements and, most important, cultivate a common atmosphere of prayer and recollection. Despite taking place in the evening, vespers is the first unit of daily worship in the Orthodox tradition. This has a biblical basis in Genesis 1:5 (“And there was evening and there was morning, the first day”) as well connections to the Jewish conception of Sabbath as beginning Friday at sundown. The office has a built-in sense of prayerful preparation for the day ahead. The hour I give to God at vespers on Saturday evening becomes a “pre-offering” for Sunday’s Eucharist—an offering of time, praise, and watchfulness that clears space for the more complete offering of myself to union with Christ in the Mass.

The text of the vespers service, based around the psalms, creates a framework for heartfelt prayer. Many of the psalms selected place special emphasis on the cry of the heart, including Psalms 130 (“Out of the depths I call to you, O Lord”) and 142 (“I cry aloud to the Lord; I appeal to the Lord loudly for mercy”). Hearing these words chanted allows me to experience them collectively, connecting me to the shared human struggle implied within the psalmist’s solitary lamentations.

In addition to the psalms, devotional words such as the “Prayer of Thanksgiving” that opens each of the seven canonical hours of the Coptic daily office, including vespers, still me with their precision:

I can’t count the number of times I’ve returned to this passage, often outside the context of formal worship. Those three prepositional phrases, each casting “every condition” in a slightly different light, never fail to remind me that I must remain dispassionate in all states, confident that even in adversity the Lord is working me toward some hidden good.

Undergirding the words of prayer are the concrete particulars of the vespers service. The prevalence of incense acts as a sensory and symbolic aid to prayer, giving a visual analogue to such lines from the psalms as “[the Lord] touches the mountains and they smoke” (Psalm 104:32) and that most distilled essence of the purpose of vespers, “Let my prayer be counted as incense before you, and the lifting up of my hands as an evening sacrifice” (Psalm 141:2). The presence of icons, a fixture in Orthodox churches, affords me a new means of familiarizing myself with Christ, Mary, and the communion of saints. Focusing on their candlelit faces, I feel my prayer close around its most centered intentions. The free movement of Orthodox worship, with its processions, prostrations, and perhaps more makings of the sign of the cross than I am used to seeing at my Catholic church, help me remember to be open to spontaneous expressions of faith governed by not only liturgical checkpoints but also the inspiration of the Holy Spirit.

All these elements combine to create an arena of prayer that is at once shared and deeply personal. While such could be said for most any prayer gathering, the byproduct of attending vespers is the chance to pray between and across traditions. While the small numbers of Catholics finding spiritual sustenance at Orthodox services aren’t likely to mend the deep divisions between East and West, it is a step toward meeting one another at the base level of faith, below the layers of history and doctrinal difference that have rifted us apart. To pray alongside one another is not to dismiss those differences but to reaffirm that which unites us. In the course of the vespers service, tethered as it is to some of oldest expressions of our faith, we are able to reimagine ourselves as a gathering of early Christians attempting to stand in the here and now of a Christ whose day will come “like a thief in the night” (1 Thess. 5:2).

Beyond all of this, there is a more mysterious, more subtle change in the tenor of my prayer that comes from a sustained pattern of attending vespers. I become alive to a liturgical cycle that flows throughout the week, each office of worship informing the next. This plunges me into a new rhythm beyond the divisions of calendrical time, where praise is of a piece—indeed, the very “unending hymn of praise” of which we speak in the Mass. As my prayer is infused with the wisdom of another tradition, so is my experience of the Mass infused with the rhythm of darkness into light, night into day, and preparation into fulfillment as established at vespers. The more I enter into this rhythm, the more it enters into me, its undulations pulling me toward unceasing prayer.

Michael Centore is a writer from Connecticut. His work has appeared in the Los Angeles Review of Books, Mockingbird, Killing the Buddha, the Clarion Review, and other publications.