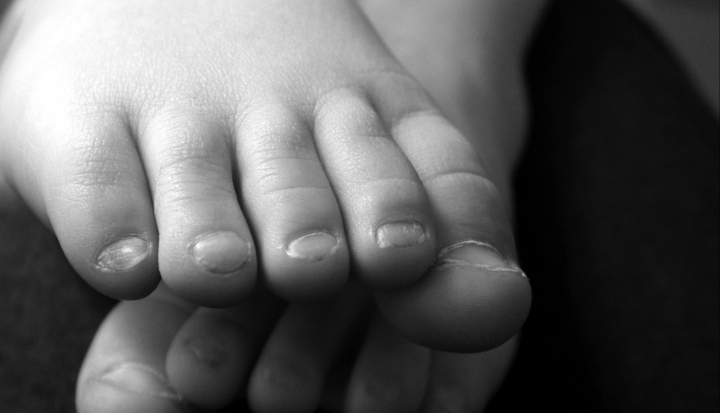 I took my son to church for Holy Thursday for the first time last year when he was just more than 18 months old. I worried that we’d have to leave early or stand in the back of the church, resigned to tracing the stained glass windows with our fingers while the rest of our community prayed, listened to scripture, shared the eucharistic meal, and washed each other’s feet. My worries quickly abated, however, when upon our arrival our priest took my son by the hand and walked him through the church, explaining in hushed tones the holy practices we would all participate in that evening, him included.

My son was uncharacteristically quiet. How much of this is he getting? I wondered to myself.

Apparently enough, and more than I could have expected. When it came time to wash our feet, my son didn’t hesitate and was the first to climb into a chair. As the rest of the congregation chanted “Veni, Sancte Spiritus,” beckoning the presence of the Holy Spirit, our priest knelt at my son’s feet, helped him remove his shoes, and poured water over his chubby toes. I knelt down next to him and helped dry his feet with the soft towel. It was a holy moment.

“It’s your mama’s turn now,” the priest said, when we’d finished washing and drying his feet together. I helped my son out of the chair and sat down. This part felt more uncomfortable to me. Between all my work, errands, cleaning, and general caretaking as a mom, I hadn’t had any time for even a DIY pedicure. I was embarrassed by the state of my feet, but this mattered not at all to my son. The priest helped him pour water from a stone pitcher over my feet. They then held them in a towel. Fat tears filled my eyes and tumbled down my cheeks, surprising me. Why was I crying? I wondered.

“I give you a new commandment, that you love one another. Just as I have loved you, you also should love one another,” Jesus tells his friends in John’s gospel, the only of the four accounts of Jesus’ last supper to include the story of how Jesus washed his disciples’ feet (13:34). Holy Thursday, I thought, looking at this scripture passage, is all about loving and humbly serving one another. And yet the moment that had moved me to tears was when I was loved and served by my own son. In the days that followed, I prayed and reflected on the cause for my tears.

When Jesus prepares to wash his friends’ feet his last night on earth, Peter protests, aghast that the one he calls teacher should sit at his own feet and wash them. He only agrees to the whole scenario once Jesus tells him, “Unless I wash you, you have no share with me” (John 13:8). I imagine Peter covering his eyes in embarrassment and wincing as his savior removes his sandals for him.

Footwashing, like most church rituals, has a meandering history. Between the lack of paved sidewalks and preference for open-toed footwear, footwashing was a necessity in Jesus’ day, not unlike the instinctual stomping and removing of boots those of us in northern climes are familiar with. A pitcher and a bowl at the door (and a servant to do the washing) was probably as much a sign of hospitality as it was a request. As someone more familiar with snow than sand, I can’t help but think of my own gestures of hospitality: “Come on in! Can I take your coat? Oh, you can leave your boots right there,” as I motion to the tray where my family’s own shoes are lined up.

While historians believe that Christian communities continued to practice this ritual, and it appeared in the Roman Missal in the late 16th century, it wasn’t until the 1950s that it was included in the celebration of Holy Thursday’s Mass of the Last Supper.

The Roman Missal says the practice isn’t obligatory but ought to be practiced when a pastoral need suggests it. In other words, a parish pastor can choose to skip the ritual. I think that’s a mistake, and after my Holy Thursday experience last year, I am even more convinced that foot-washing should be a regular Christian practice.

As I reflected more deeply on this new commandment from Good Friday to Easter and then through the rest of the year, it occurred to me that I’d only been taking part of Jesus’ instruction seriously. Since my son’s birth, I’d been living out the “love one another” part of the “new commandment” in a way that consumed all the minutes of my life. I’d cleaned his face after every meal, bathed him every night, and wiped his bottom countless times a day. But suddenly, here he was, at my feet, washing and drying me. Loving and serving me.

One of my biggest spiritual challenges, and one that I revisit every Lent, is to not let my ego get in the way of my reliance on God. I don’t like to be vulnerable. And I’m wary of relying on others. As a smart, competent American woman, I’m afflicted by a particular zeal for self-reliance in the way many parents, caretakers, aid workers, and nurses are.

That pull-yourself-up-by-the-bootstraps mentality can go too far and is a way to make the self the center of life instead of God. Sometimes, when we focus so much on serving others, and do so in the name of God’s love, it’s so easy to forget that we are just as beloved. In truth, we are reliant on our brothers and sisters, regardless of whether we recognize it. So there is a constant pastoral need to liturgically practice Jesus’ new commandment that we love one another as we are loved by God. It’s a wonder we don’t wash each other’s feet more than once a year.

When I watched my son easily climb into the chair and remove his shoes, I was offered a glimpse into what the new commandment looks like in honest, vulnerable, faithful practice. It’s not merely God’s dream that we love and serve each other, but that we also accept our own belovedness. Footwashing, then, is sacramental, revealing God’s desire for creation to care and be cared for.

Recently I was remembering last year’s Holy Thursday service with a friend of mine. He recounted how one of the women in our congregation, whose health had started to decline, sat down to have her feet washed by her husband. “They are approaching the end of their life together, and here was the sacrament of their 50-odd years of marriage: him washing her feet, her allowing him to do it, both in absolute trust,” my friend said. “I was expecting the sky to rip open any moment.”