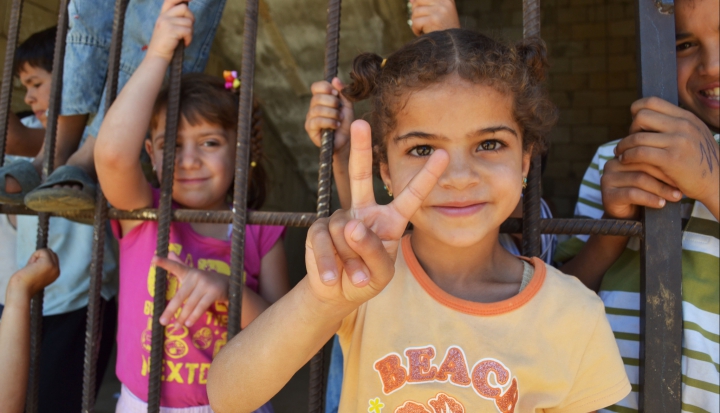 Returning after an unprecedented visit with refugees on the Greek island of Lesbos in April last year, Pope Francis startled the world by bringing 12 Syrian refugees back with him to Rome. Who did he turn to for help in orchestrating this humanitarian public relations coup? The Rome-based community of Sant’Egidio.

Since that dramatic gesture, Sant’Egidio has been shepherding the pope’s refugee families and accepting new people fleeing Syria, assisting them with language lessons, job placement, and settling in to life in Rome.

It’s perhaps a bit of a cliché in the Catholic world to suggest that one should try less to make peace as to be peace. That idea emerges from a number of different contexts and sources. Thomas Merton contributed to it when he wrote:

“Instead of loving what you think is peace, love other men and love God above all. And instead of hating the people you think are war makers, hate the appetites and the disorders in your own soul, which are the causes of war.”

Few Catholics are as consistently successful at being peace—hating the violence in ourselves first and living the hard commitments of a life that itself expresses peace—than the members of the Sant’Egidio community. The community began in 1968 when a group of high school students began to meet in daily prayer at the Church of Sant’Egidio in Rome’s Trastevere district. They’ve since grown to 50,000 members and spread across the world. The community actively serves the poor, fights capital punishment, and has assumed a unique international peacemaking role. Some even describe the community’s Italian home base as “the U.N. at Trastevere.”

The community explains that it was “friendship with poor people” that inexorably led its members to the work of peacemaking, reasoning that “war is the mother of poverty.” In its struggle for peace, the community arms itself with “the weak means of prayer, of sharing difficult situations, meeting and dialogue.”

Sant’Egidio began its remarkable diplomacy after realizing its humanitarian efforts in the African nation of Mozambique would continue to be frustrated as long as the internal conflict that began at independence in 1975 persisted. By 1990, when Sant’Egidio began its intervention, the conflict had claimed 1 million lives and led to the displacement of millions of people. When neither the government nor rebel factions could agree on mediators from other countries, they turned to Sant’Egidio as a third party trusted by both sides.

Soon came calls for the community to assist in defusing other crises around Africa, and what came to be known as the Sant’Egidio method was eventually applied to negotiations toward reconciliation and peace in troubled nations all over the world. Patience is a key virtue of the method. Those first discussions in Mozambique took 27 months to reach a successful conclusion.

Since assisting with the pope’s impromptu refugee airlift last year, Sant’Egidio members have helped hundreds of other Syrian refugees. The community is now focused on a much larger-scale response to the ongoing human catastrophe in Syria: the creation of a nongovernmental humanitarian corridor to safely move refugees out of the region, shepherding them away from the hands of human traffickers and across the dangerous waters of the Mediterranean to refuge in Italy.

It is perhaps its most ambitious initiative for peace yet, a desperate intervention that is diplomatically and logistically fraught set against an intractable conflict that seems to have exhausted the world’s attention. It may take a miracle now to bring peace to Syria. With prayers and practical support from people of good will, perhaps Sant’Egidio could be the miracle workers the world has been waiting for.