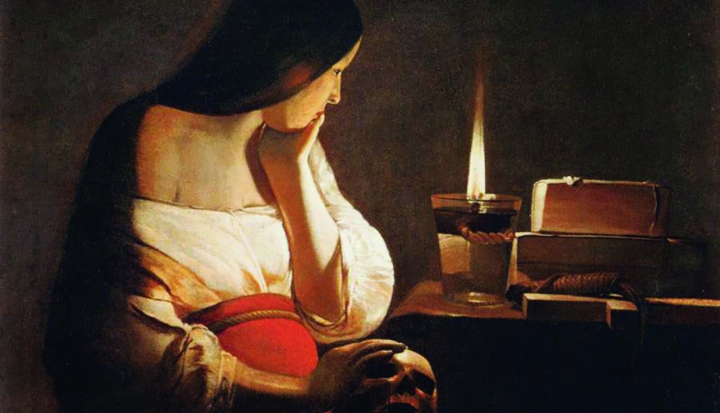 The Catholic canon of the Bible contains 73 books. Three of them bear women’s names: Ruth, Judith, and Esther. These three texts also make the actions of women their central concern. I consider them Exhibits A, B, and C in the argument against the Bible being a hopelessly sexist document. Why male editors gave the green light to the inclusion of these texts is the real mystery.

Full disclosure: Not all compilers did OK them, which is why Judith isn’t in Jewish Bibles and holds a subcanonical status in those Protestant Bibles that do include it. Ruth’s story appears first. As she’s the 28-times-great-Nana of Jesus, we find her tale charming. It’s also biblically revolutionary. Writers for children tend to observe the Charlie Brown rule: If you don’t kill off the parents straightaway, render them irrelevant to the action. The writer of Ruth uses the same pitiless rule in liberating the landscape for her women’s tale, killing off three husbands in the first paragraph. That leaves three women to make three self-determining choices.

It’s a brilliant solution to a vexing problem: How do women engage the life quest in contexts in which men call the shots? With the men dearly departed, Orpah returns to her father’s house, hoping to marry again. Ruth chooses to remain with her mother-in-law Naomi. Echoing Abraham’s tale, Ruth leaves father and fatherland behind, migrating to the foreign city of Bethlehem to adopt Naomi’s people and religion as her own. Of course it’s a love story, with marriage to Boaz the happy ending. But the essential love in the story is the bond between Ruth and Naomi. The men are narrative props, and Boaz is—surprise!—Ruth’s reward for taking the quest, not the other way around.

Judith’s author takes another route to liberate her protagonists for the quest. Pious Judith is also widowed, and her trusty maidservant unmarried. But a lot of men are left standing in this story, which makes them a problem the author solves by ruthlessly emasculating them down to the last elder. The kings are presented as grandiose fictions, the men of Judith’s town as weaklings and cowards. Even General Holofernes, the terrifying villain of the piece, turns out to be just a dumb drunk. Judith and her maid don’t have to bring a weapon to this fight; Holofernes furnishes plenty, with which he is dispatched.

Judith returns home a superhero. Many citizens seek to reward her by asking for her hand in marriage. Seriously? What would Judith want with one of these fools underfoot? Instead, she opts to retire with her maid and live happily ever after. We can appreciate why some folks deem it unwise to include the story of Judith as a sacred text.

The writer of Esther takes another tack to ensure the protagonist’s freedom, one a few shades kinder to the menfolk. Orphaned Esther is raised by her benevolent uncle Mordecai. But she’s soon whisked off to a harem to participate in tryouts for the next queen of Persia. Life is tough for a teenaged beauty! Mordecai can’t control his niece from outside the harem beyond delivering a heavy guilt trip about how the fate of all Persian Jewry is in her manicured hands. Of course Esther wins the beauty contest, becomes queen, and stands up to the king in time to save her people. You go, girl!

The stories of Ruth, Judith, and Esther have been sidelined for not being especially pious, for not having much to say about God, and for not being morally edifying. One might reply that a Bible reduced to the pious, God-centered, edifying bits would be a much-abridged volume. What these three texts really provide are biblical fantasies about what good women might do with the freedom and opportunity to be self-determining.

OK. Back to the normative parts of the Bible. Women do figure in the historical books of Kings. Many of the significant ones are married to David: Michal, Abigail, and Bathsheba. Daughter of King Saul, Michal is conflictingly tethered to both father and husband. Bathsheba’s freedom once David sends for her is much disputed. Abigail, however, is intriguingly independent, alert, and proactive. It’s no wonder that, rather than merely procuring her, David sends Abigail a courtly proposal of marriage.

The books of Kings also contain significant queens. Solomon treats the noble African Queen of Sheba as an equal. The prophet Elijah’s nemesis, Queen Jezebel, is presented as the epitome of evil. From Jezebel’s non-Israelite perspective, of course, Elijah slew 400 priests of her religion! The real villainous queen in Kings is Jezebel’s daughter, Athaliah (2 Kings 11). In retaliation for the assassination of her son, Athaliah murders most of the royal family and rules herself until her eventual execution. But a couple of vile biblical queens, it must be said, can never trump the parade of monstrous kings that extends into New Testament times.

In the prophetic literature, women become increasingly invisible, mere voices offstage. While Elijah and Elisha both rely on female benefactors, after the ninth century B.C. male prophets operate like lone rangers. Isaiah’s wife is a prophetess, but we don’t even know her name. Huldah is identified as an authoritative Jerusalem prophet in 2 Kings 22, but like all nine female prophets mentioned in scripture, we have no writings of hers to contemplate. In wisdom literature, women are even more rarely actors and mostly spoken about. Song of Songs features a dazzling female lover famous for her desirability. While Wisdom is personified and revered as a lady in Sirach, Wisdom, and Proverbs, Folly is also likewise mocked as a dame. When human females are the topic of wisdom books, it’s rarely in an appreciative light. Unless you consider the poem in praise of a worthy wife to be a positive appraisal (Proverbs 31:10–31). I, however, consider it a recipe for a heart attack.

Does the Bible change its tune on women in the turning of the Testaments? Well, for one thing, after an absence of several centuries, females are back in the story as active participants. Elizabeth and Mary burst onto the scene like walking miracles even without their jaw-dropping pregnancies. Add to them disciples like sisters Mary and Martha, Mary Magdalene, even Mrs. Zebedee who promotes her sons to Jesus—it can feel as overwhelming as joining a sorority. Instant sisterhood!

Women seek cures from Jesus—and don’t take no for an answer. Women follow Jesus from Galilee to Jerusalem, from the cross to the tomb, and through Pentecost. While the gospels say Judas held the purse, Luke claims the women filled it as the primary sponsors of the ministry (Luke 8:1–3). Five thousand men were counted at the miracle of loaves and fishes, but none of them were on hand at Calvary.

St. Paul is unexpectedly casual in referencing the women he views as ministerial partners. To Paul, Prisca is a fellow evangelist, Lydia opens a house church, Phoebe is a deacon (not deaconess). When Paul attests that in Christ there is no male or female, we sense that the experience of this truth preceded the theory for him.

Three hundred and thirty-three unique women have been counted in the Bible. This careening survey highlights only a few. Perhaps it’s enough to suggest that women evolved well beyond their original Genesis stereotype into movers, shakers, and players. It gives me hope to see how women have engaged salvation history so far. There’s so much more to do.

TagsScripture Testaments Women in the church